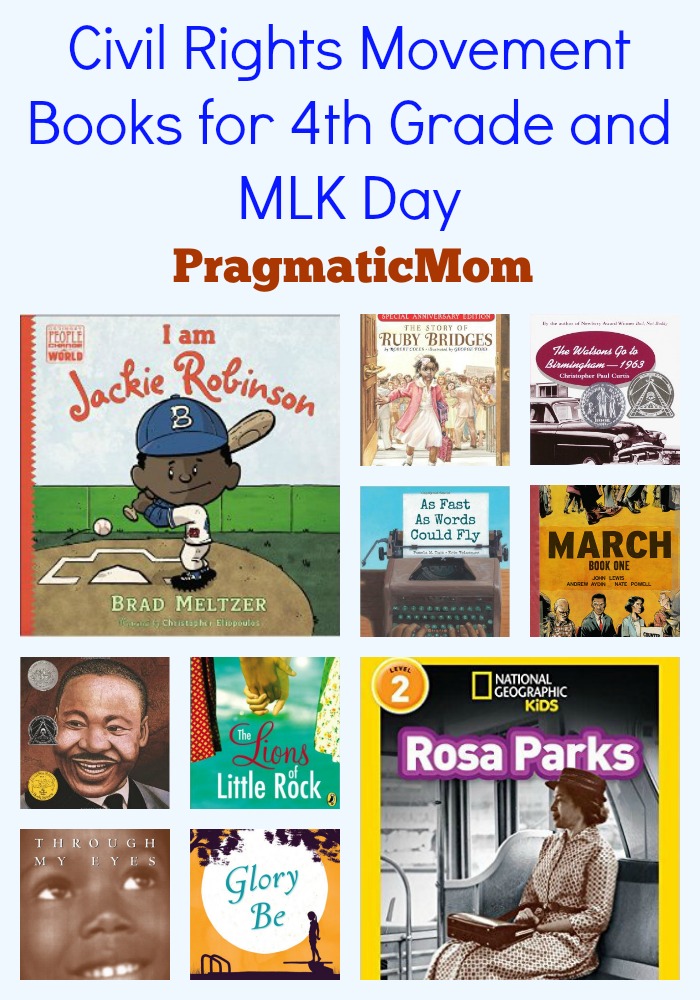 In honor of Martin Luther King, Junior day, I wanted to share my son’s 4th grade Civil Rights Movement project. His teacher created a really great timeline that I hope will be helpful as well.

I am Jackie Robinson (Ordinary People Change the World) by Brad Meltzer, illustrated by Christopher Eliopoulos

I’m not sure if I would consider Jackie Robinson “ordinary.” He was, after all, the first UCLA student ever to letter in four sports in the same season! His family’s backstory of how they shared extra food with everyone in the neighborhood, regardless of color helps to give insight into how he had the inner strength to withstand the pressure as the first African American major league baseball player. This picture book uses cartoons as well as text to tell his story and skillfully draws the reader into his extraordinary life. [picture book, ages 5 and up] It’s easy to think that Rosa Parks did not give up her seat because she was tired. The only thing she was tired of, however, was giving in!

This is a very well done nonfiction Easy Reader that dispels commonly held beliefs about Rosa Park. It’s also full of interesting details that most kids would not know like Rosa Parks was part Native American. The photos and captions not only tell more facets of her story but help prepare kids for standardized tests. [nonfiction Easy Reader Level 2, ages 6 and up]

The truest thing we have in this country at this time is little children … if they think you’ve made a mistake, kids speak out. Fannie Lou Hamer

Malcolm X called Fannie Lou Hamer “the country’s number one freedom-fighting woman.” Born to sharecroppers in Mississippi, Fannie Lou worked alongside her family from dawn to dusk in the cotton fields and went on to become a hero of the Civil Rights Movement. [advanced picture book, ages 9 and up] PickyKidPix really liked this book when she read it in 5th grade. She says, “It’s about a girl who is very shy but finds her voice through her best friend. But her best friend is black and she lives in a segregated community and she has to find ways to see her friend but it’s very dangerous because they don’t support white people seeing black people.” [chapter book, ages 9 and up]

The violence of the Civil Rights Movement is what made headlines and the images of what we remember today. This is a quieter story: the peaceful integration of Huntsville, Alabama. Their African-American citizens also fought for Civil Rights conducting sit-ins, boycotting stores, and using public parks designated for whites only.

This advanced picture book gives a perspective of how a few people can make difference to find alternatives to what the “norm” is. It shows that what seems impossible can be achieved with creativity, courage, and cooperation. [advanced picture book, ages 8 and up] I was thrilled to meet Ruby Bridges when she came to visit my kids’ elementary school. I drove her after her presentation to her hotel in Boston. It was then we discovered our connection to Dr. Robert Coles. His son was a classmate of mine in college. Small world! They had lost touch over the years, but I was able to track down Robert Coles, Jr. and connect them. Dr. Coles tells her story in a way that reveals the depths of courage she possessed as a young girl. [picture book, ages 4 and up]

This is Ruby’s own perspective and she’s quite modest. It’s a nice companion book to Dr. Robert Coles. During her presentation, Ruby told us about how she and other African American children were given much more difficult tests to prevent them from entering the previously segregated schools. Despite an unfair test, she scored high enough to qualify. [picture book, ages 8 and up]

As Fast as Words Could Fly by Pamela M. Tuck

Pamela M. Tuck tells her father’s story of integration into a previously all-white high school. The typing contest was one way that could not be “fixed” against an African American contestant. Typing, in this context, is a political act of bravery. This book pairs well with Ruby Bridges so that students can see that the battle for Civil Rights was fought on many fronts. Many “ordinary” kids were able to help change history. [picture book, ages 6 and up] The Freedom Riders are gently introduced in this civil rights story set in Mississippi around the closure of a segregated public swimming pool in 1964. This coming-of-age story for a white girl helps to illustrate the different points of views of those in the South and I love how the local public library becomes the touchpoint for integration. [chapter book, ages 9 and up]

This young adult novel obliquely nods to an older couple in the book who were Freedom Riders in their youth. [young adult, ages 12 and up] March: Book One by John Lewis and Andrew Aydin, illustrated by Nate Powell

John Lewis tells his own story in a three-part graphic novel book series, of which two are out. Book One spans John Lewis’ youth in rural Alabama, his life-changing meeting with Martin Luther King, Jr., the birth of the Nashville Student Movement, and their battle to tear down segregation through nonviolent lunch counter sit-ins, building to a stunning climax on the steps of City Hall.  [graphic novel, ages 12 and up]

John Lewis is an American civil rights leader and politician best known for his chairmanship of the Student Nonviolent Coordinating Committee (SNCC) and for leading the march that was halted by police violence on the Edmund Pettus Bridge in Selma, Alabama, in 1965, a landmark event in the history of the civil rights movement that became known as “Bloody Sunday.” Britannica

After the success of the Nashville sit-in campaign, John Lewis is more committed than ever to changing the world through nonviolence — but as he and his fellow Freedom Riders board a bus into the vicious heart of the deep south, they will be tested like never before. Faced with beatings, police brutality, imprisonment, arson, and even murder, the movement’s young activists place their lives on the line while internal conflicts threaten to tear them apart.

But their courage will attract the notice of powerful allies, from Martin Luther King, Jr. to Attorney General Robert F. Kennedy… and once Lewis is elected chairman of the Student Nonviolent Coordinating Committee, this 23-year-old will be thrust into the national spotlight, becoming one of the “Big Six” leaders of the civil rights movement and a central figure in the landmark 1963 March on Washington for Jobs and Freedom. [graphic novel, ages 12 and up] This is the perfect book for very young readers to learn why we celebrate Martin Luther King, Jr. day. [picture book, ages 4 and up]

The Watsons Go to Birmingham – 1963 by Christopher Paul Curtis

A wonderful middle-grade novel narrated by Kenny, 9, about his middle-class black family, the Weird Watsons of Flint, Michigan. When Kenny’s 13-year-old brother, Byron, gets to be too much trouble, they head South to Birmingham to visit Grandma, the one person who can shape him up. And they happen to be in Birmingham when Grandma’s church is blown up. [chapter book, ages 8 and up] Here’s a video of this timeline along with some Civil Rights books for kids with Martin Luther King, Jr’s famous speech in the background:

I’m really proud of my son’s story he wrote for his Civil Rights Unit. He might not like that I put it up here but I am typing it up, typos and all:

As we stopped at the Lincoln Memorial everyone grew silent. I could feel the sweat on my hair slowly running down my neck. The Reflecting Pool was shimmering like gold. As I looked around, there were signs reminding me what we were fighting for. My dad lifted me up and placed me on his shoulders. As everyone got settled famous Civil Rights leaders started to speak. Voices booming onto the sea of marchers people were cheering, clapping, hollering, and I was too. I couldn’t make out who was speaking, but then a man shining like the sun spoke a speech full of hope and equality. “I have a dream that my four little children will not be judged by the color of their skin, but the content of their character. ” The crowd exploded with excitement full of thunderclaps and screams of freedom. We’re so close you could taste integration, and I smiled for what felt like forever. His words brightened the sky, making the air once polluted with discrimination now cleansed with equality. My family roared like lions as we fought for our rights. And showed everyone the right path to walk.