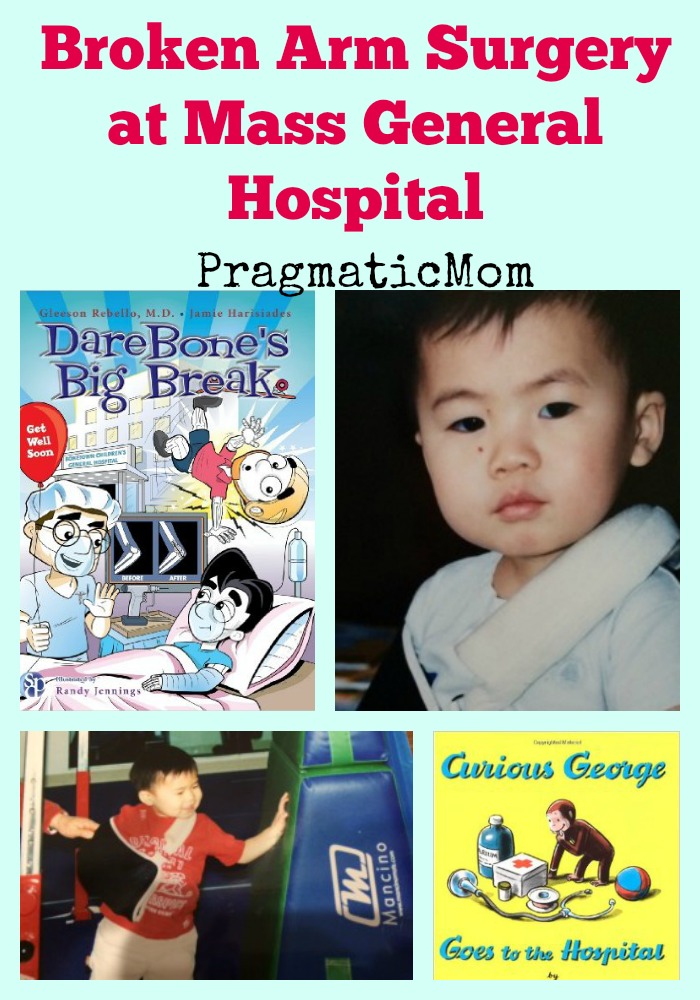 When my son was three years old, he took a morning gymnastics class at a place called My Gym. It was a drop-off supervised class, but I tended to hang out and chat with moms, many of whom were at my son’s preschool. The gymnastic teachers were setting up for the next activity when my son who was on a play structure, walked onto a large yoga ball, attempted to “ball walk” like he’d seen a bear do in a cartoon. My stoic little boy was a trooper during his broken arm surgery.

He fell off the ball, screamed, and turned white as a ghost. I rushed him to the emergency room of our local hospital and they found that he had broken his arm in three places near the elbow but even more worrisome, near his growth plates. They put us on an ambulance — no sirens — to Massachusetts General Hospital where they had pediatric orthopedic surgeons there capable to doing this delicate surgery.

It was scary for my son. He had to go through a second set of painful x-rays. The surgery that to occur later that afternoon so he was not allowed to eat or drink anything. Through it all, he remained stoic and patient. The nurses and doctors were amazed. Even a broken arm from gymnastics does not deter him from more activity!

We had read Curious George Goes to the Hospital by H. A. Rey many times previously and recalling the story of the little monkey who swallowed a puzzle piece and needed surgery was comforting. Even though the surgeries were different, the processes were similar and remembering the book made this experience less scary for my son.

I wish that I had a copy of DareBone’s Big Break then because it’s by pediatric orthopedic surgeon Dr. Gleenson Rebello who actually works at Mass General Hospital! Small world! He wants to jump into the foam pit despite his broken arm.

DareBone has an accident at the playground resulting in a similar injury to my son — multiple fracture near the elbow that requires surgery, steel pins, and a cast.

Told in rhyme, the picture book shows what happens when DareBone breaks his arm, from injury to surgery to cast removal. This is a great for any kid who has broken his or her arm, especially if you are going to make a visit to the hospital! [picture book, ages 4 and up]

As it turns out, my son — now 11 years old — has had three Emergency Room incidents. He pulled down a heavy stocking holder which hit his head when he was a toddler, this broken arm accident, and his recent neck surgery for a cyst. Is this a boy thing? What do you think? Thanks for your input!