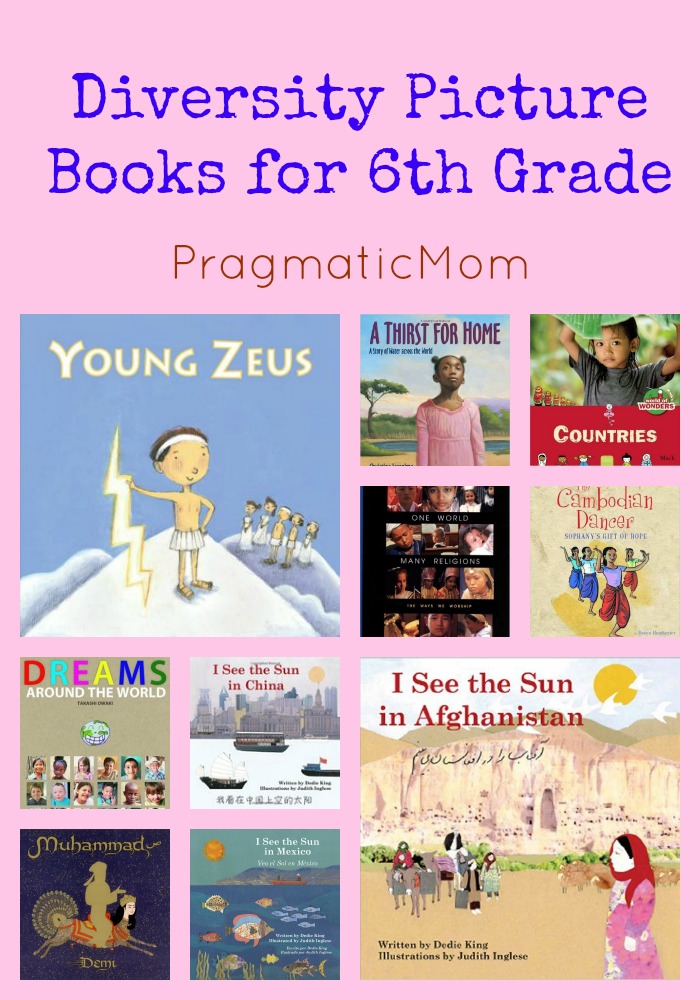 I consulted my 8th grader, PickyKidPix, about middle school curriculum. She pays attention to everything going on so she remembers what she studied and notices what other grades are doing. She said that her teachers have generally covered the same curriculum they have always done which seemed to naturally follow Common Core but that different teachers put different emphasis on units based on their preferences.

For example, Grasshopper and Sensei, in 6th grade was delighted to find that 6th Grade English included an extensive Mythology unit with she aced without studying because she loves mythology. She took the National Mythology Examination in 5th grade for fun, for example. For PickyKidPix however, her teacher wasn’t as into mythology so this was a single week unit (which suited her just fine because she never got into the Percy Jackson series).

What diversity picture books would you add? Thanks for your suggestions!

Even if you have read a lot of Greek mythology, you will still learn something new from this picture book that tells the story of how young Zeus rescued his brothers and sisters from his father’s stomach and defeated the Titans. [picture book, ages 4 and up]

I See The Sun series

I noticed one of these books in my daughter’s Social Studies class at Curriculum night so I loaned her teacher a couple different books in this series that I had. We both love how portrays modern life in different countries around the world and is bi-lingual in their native language.

I See the Sun in Afghanistan by Dedie Smith

In English and Afghan Farsi, I See the Sun in Afghanistan portrays a culture that emphasizes patriarchal family, love of country and fierce loyalty to family and tribe. Follow a young girl as she eats breakfast of khojur, helps bring the sheep to pasture and attends school. While the book is not about the war, it is a backdrop to the story and a good jumping off point for further discussion. [picture book, ages 5 and up]

I See the Sun in China by Dedie Smith

Told in English and Mandarin Chinese, learn about the life of a young girl in as she travels from a small town in China to Shanghai to spend time with her aunt. It’s an interesting contrast between life in a small village to a large modern city in China. [picture book, ages 5 and up]

I See the Sun in Russia by Dedie Smith

In English and Russian, meet Anton, a young boy growing up in St. Petersburg, Russia. Follow him as he takes violin lessons, goes on a class field trip to the Hermitage Palace, and plays soccer outside his apartment complex. [picture book, ages 5 and up]

I See the Sun in Mexico by Dedie Smith

Bilingual in Spanish and English, meet Luis’s working-class family who lives in La Paz, Mexico. His father is a cook on an excursion boat and his mother makes the best tortillas in the city. Luis’ day includes helping his father by shopping for vegetables and helping out on the boat. Both tourists and Luis revel in the clear blue ocean filled with brightly colored fish. [picture book, ages 5 and up]

Picture Books To View the World

A Thirst for Home: A Story of Water Across the World by Christine Leronimo, illustrated by Eric Velasquez

Alemitu lives in a small village in Ethiopia where she and her mother must walk miles to the nearest watering hole for life-sustaining water. Hunger is a constant companion and her mother gives her up for a better life. Now Alemitu is called Eva and clean water flows from the tap. Eva Alemitu compares her life as Alemitu and now as Eva and finds that water connects them both.

In Ethiopia, 65% of the population does not have access to clean water. Only 33% of women know how to read and write, leaving them in poverty.  The reason: they spend hours each day to carry water back to their village, leaving them no time for school. [picture book, ages 6 and up]

This is the true story of Sophany Bay, a renowned dancer in Cambodia. Forced to flee her country when the Khmer Rouge come to power, she immigrates to California. Her gift of hope was to teach children in the Cambodian community the traditional dances of Cambodia so that young people growing up far away from the land of their ancestors would know about their culture. [picture book, ages 5 and up]

Dreams Around the World by Takashi Owaki

Thirteen kids around the world, ages four to eight, share their dreams of the future. Each page spread includes a day in their life as well as what they want to be when they grow up. [picture book, ages 5 and up]

With lush photographs and cheerful cartoon, each page spread covers one country with two short paragraphs of interesting facts. [nonfiction picture book, ages 5 and up]

One World, Many Religions: The Way We Worship by Mary Pope Osborne

Most 6th graders will recognize Mary Pope Osborne from the Magic Treehouse series but they might know that she majored in World Religion. In this picture book, she introduces readers in six short chapters to major religions: Judaism, Christianity, Islam, Hinduism, Buddhism, Confucianism, and Taoism. [picture book, ages 8 and up]

Born in Mecca in the year 570, Muhammad grew into a sensitive and thoughtful man who believed deeply in the worship of one true god.

In his fortieth year, Muhammad experienced a revelation from the angel Gabriel that he, Muhammad, was the messenger of God. Over the next twenty-three years, he received many such revelations, all of which were written down by scribes at the time of revelation to become the Koran, the sacred scripture of Islam, a religion that is practiced by nearly one-quarter of the world’s population and holds as its most sacred tenet that there is no god but God.

Through a clear text and stunning illustrations based upon those of traditional Islamic expression, the award-winning artist Demi here introduces the remarkable life of the Prophet Muhammad for young readers.

I think it is more important than ever to give our children an understanding of Islam and that it’s really not so different from the teachings of Jesus Christ. Demi does a beautiful job with this gorgeously illustrated advanced picture book to explain who Muhammad is and therefore what Islam is all about. [picture book, ages 8 and up]

I have a picture book list on the Hindu Festival of Lights, Diwali. For kids learning Spanish, try these bilingual picture books.