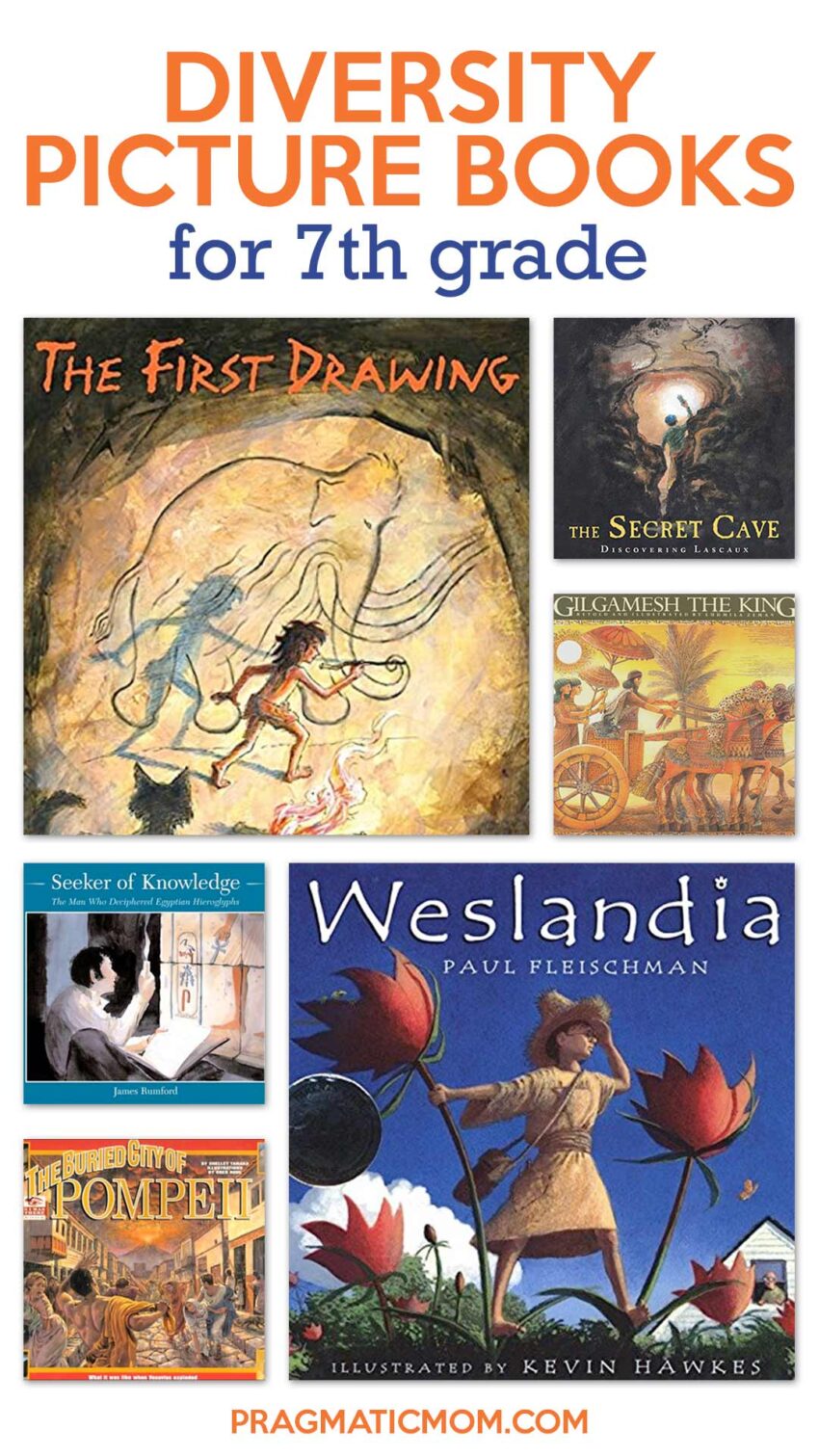 What multicultural picture books should I add to this list? Thanks for sharing! The First Drawing by Mordicai Gerstein

Imagine life more than 30 thousand years ago, before drawing was invented! Using a burnt stick (charcoal), imagine the first human to see shapes on a wall that resemble animals and draw them. It would feel like magic! This is one version speculating why early humans created cave paintings and this story is inspired by cave paintings in Chauvet-Pont-d’Arc cave in Southern France. [picture book, ages 4 and up] In the middle of WWII, the Lascaux cave containing prehistorical cave art was discovered by boys. Sealed for about 17,000 years, it was the only cave painting where the colors had not faded. The animal shapes often followed the contours of the walls and the paintings are believed to have been used as part of trance rituals more than 35,000 years ago.

This picture book tells the story of the four young men from Montignac, France who discovered Lascaux in 1940. The cave is now closed to all but a few scholars. Lascaux II, a meticulous replica opened to the public in 1983. [picture book, ages 6 and up]

Tormented by the kids in his class, Wesley decides to start his own civilization as his summer project. He would grow his own staple food crop, the root of a new civilization. Seeds blow into a plot he’s prepared and a wondrous multi-purpose plant is soon thriving in his garden. The fruit is edible, the tubers filling, and the leaves highly aromatic. He successfully weaves a hat and clothes from the plant’s fibers. The plant’s seeds yield an oil that repels mosquitos and protects his skin from the sun.

Wesley discovers a new way to tell time based on the plant’s flowers, and a new counting system as well. He decides to name his new land after himself: Weslandia. Just before school starts, Wesley creates his own language. As he returns to school, he finds that his new civilization has made him a lot of new friends. [picture book, ages 4 and up]

Mystery Of The Giant Masks Of Sanxingdui by Icy Smith The mysterious and ancient city of Sanxingdui is famous for its astonishing bronze-casting technology. Villagers come from faraway lands to admire the bronze masks and trade for the highly prized bronze wares. However, Sanxingdui faces danger when its people hear rumors of a foreign invasion. The chief’s daughter, Min, and her newly initiated warrior brother, Wei, lead the villagers to flee their homeland. Where do they go? And what do they do with their sacred bronze masks and statues? Discover the lost civilization of Sanxingdui in Sichuan Province, China, over 3,000 years ago. In 1986, the discovery of monumental bronzes in Sanxingdui was hailed as “The ninth wonder of the World”. The artifacts unearthed are as old as the Pyramids of Egypt and reveal an advanced and civilized society in Sanxingdui. [picture book, ages 6 and up]

Gilgamesh is a god-king who ruled the city of Uruk for 126 years. He’s the main character in the Sumerian poem, The Epic of Gilgamesh, considered the first great work of literature. In the epic, Gilgamesh is a demigod of superhuman strength who builds the city walls of Uruk to defend his people and travels to meet the sage Utnapishtim, who survived the Great Flood.

In this first picture book about Mesopotamia*, Gilgamesh is a cruel king who forces his people to build a wall around their city of Uruk, and only another demigod, Enkidu, who lives with the animals of the forest can stop him. [picture book, ages 6 and up] *Mesopotamia included Sumer and the Akkadian, Babylonian, and Assyrian empires, all native to the territory of modern-day Iraq.

I am very partial to ancient Egypt and Hatshepsut is intriguing as the only female pharaoh in Egyptian history. As a ruler, she made Egypt a powerful and prosperous country by focusing on expanding trade with other countries which brought in timber, horses, and other exotic treasures. One mystery still remains: why were most records of Hatshepsut wiped out?  [advanced picture book, ages 6-11]

I have more on Hatshepsut and Sennenmut including artifacts from the Boston Museum of Fine Art. Seeker of Knowledge: The Man Who Deciphered Egyptian Hieroglyphs by James Rumford Hieroglyphs from Sarcophagus of Queen Hatshepsut recut for her father, Thutmose I

Jean-François Champollion was born in 1790, around the time when General Napoleon was in Egypt. At 11 years old, when he visited a famous scientist who had been in Egypt with Napoleon, he saw Egyptian artifacts and was determined to read the hieroglyphs. At age 16, he met the scholars studying the Rosetta stone covered in Greek and Egyptian words. It wasn’t until he was 30 that he was able to unlock the mystery of the hieroglyphs. [picture book, ages 6 and up]

The Buried City of Pompeii by Shelley Tanaka

The excavation of the House of the Menander, the estate of a wealthy family that lived on the island of Pompeii, is the basis for this factual and historical fiction account of what happened on August 24, 79 A.D. The story is from the point of view of Eros, the chief steward for the Menander family. He was a freedman working for one of the richest and most respected families in Pompeii. His actual body and that of a little girl — most likely his daughter — was found preserved from the volcanic eruption. Details of day-to-day life in Pompeii convey what life was like in Ancient Rome from visiting the baths, the open-air market, to the brutal sporting games in the amphitheater. Teachers can read aloud parts of this book but I wouldn’t be surprised for students to want to finish it themselves. [advanced nonfiction, ages 9 and up]