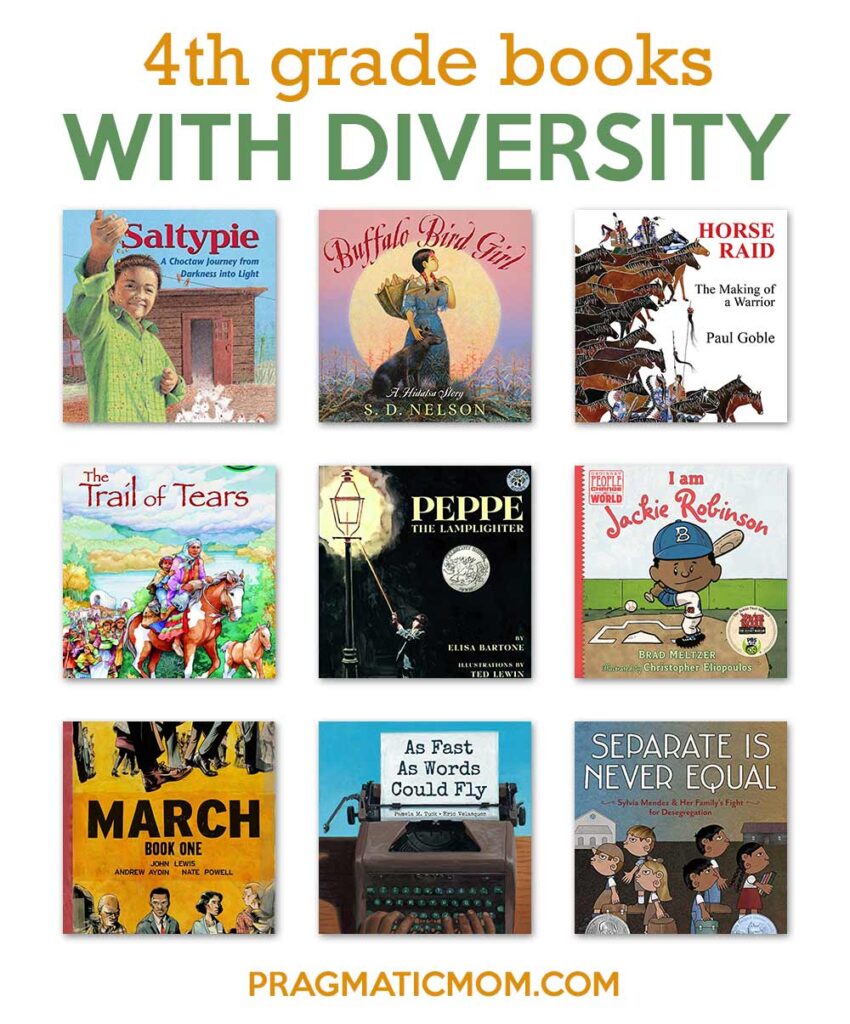 Multicultural Children’s Book Day has a new Classroom Reading Challenge in which we gift a FREE diversity hardcover book to teachers who commit to reading four diversity books to their students during the month of January. This program is generously underwritten by the Junior Library Guild. A sample of the books that we will be donating are here.

During the fourth grade, my kids have always studied the Civil Rights Movement, turn of the century immigration, and geography of the 50 U.S. States. I also found Native American, and specifically Trail of Tears, on the Core Curriculum, but I believe that my kids studied colonial history of the United States in 5th grade but I will include Native American picture books for both grades.

What books am I missing? Please share! Thank you!

Saltypie: A Choctaw Journey from Darkness into Light by Tim Tingle, illustrated by Karen Clarkson

Debbie Reese of American Indians in Children’s Literature (AICL) blog has stressed the importance of showing contemporary Native Americans because kids seem to think that Native Americans do not exist now. I can see that misconception — it’s similar to our 2nd grade unit on Ghana where kids think everyone lives in a rural village and that cities don’t exist in Africa.

Tim Tingle is an excellent children’s book author that I encourage everyone to check out. His picture book covers a multitude of Common Core and elementary school topics including bullying, immigration, Civil Rights, and contemporary Indian Americans.

Tim’s grandmother, a member of the  Choctaw Nation, moves from Oklahoma to Texas as a young mother where she is greeted while standing on her front porch with a rock thrown to her head. It cuts her eye which leads eventually to losing her vision. Tim’s father is two years old at the time.

While there is certainly anger and a desire for revenge, his grandmother redirects this energy with “Saltypie”, a term that means “bad things happen; let it go.” Many years later, his grandmother undergoes successful eye transplant surgery but the blessing she taught those around her is to see without eyes. [advanced picture book, ages 6 and up]

The Hidatsa people are still here as are the Mandan and the Arikara where they remain one sovereign nation. Buffalo Bird Girl is a real person. She shares her story living through extraordinary times from life in earth-mound lodges on the high bluffs on the Missouri River in permanent farming communities to being forced to relocate to Fort Berthold Indian Reservation in North Dakota. Her life as a young girl is documented through period photographs as well as beautiful illustrations. This is a glorious picture book to learn how the Hidatsa people lived, what they ate, and how they played. It also is a great focal point for a conversation about Native people who lived as farmers in permanent communities. Why, then, where they forced to Indian Reservations when their way of life was similar to the settlers moving west? [advanced picture book, ages 8 and up]

Horse Raid: The Making of a Warrior by Paul Goble

Buffalo Bird Girl talks about Lakota raids on her people but the Author’s Note is careful to point out that The Hidatsa were a warrior society as well. Their men gained respect and status by their success in battle and enemy raids were part of their culture. Horse Raid: The Making of a Warrior goes into the significance of enemy raids, not as thieves or solely to gain valuable property, but as a way to show courage, leadership, and fighting skills.

This picture book tells the story of Lone Bull, a “typical” 14-year-old Oglala Sioux Indian who wants to make a name for himself through horse-raiding, though his mother is reluctant to put him in danger at such a young age. [advanced picture book, ages 9 and up]

The Trail of Tears by Joseph Bruchac, illustrated by Diana Magnuson

Written by one of the most respected Native American authors for children, Joseph Bruchac recounts the events and men involved that lead up to The Trail of Tears. It’s October 1, 1838, and John Ross, the leader of the Cherokee Nation, is forced to leave his home in Tennessee. Why and how did this happen? Where are the Cherokee people today and how are they doing? Bruchac covers all this and more. For anyone learning about The Trail of Tears, this is a must-read! [Easy Reader, ages 7 and up]

Turn of the Century Picture Book for 4th Grade

Peppe the Lamplighter by Elisa Bartone, illustrated by Ted Lewin

This Caldecott Honor book from 1994 tells the story of a young Italian boy who works lighting the street lamps to support his family — six sisters and his sick father. His father is angry that his son has this job because he hoped for a better life for his children. His father’s disappointment tears at Peppe’s heart until one day, he stops doing it. Tonight though, his little sister outside and afraid of the dark. His father begs him to light the lamps and, for the first time, Peppe gets his father’s approval. When he finds his sister, she tells him that he has the best job in America because he scares the dark away. Peppe finds joy in his job again, lighting each lamp, pretending that it’s a beacon of promise for tomorrow. [picture book, ages 6 and up]

From the longhouse (Joseph Bruchac) to Chinatown (Alma Flor Ada) to the Liberty Bell (Linda Sue Park) and Fenway Park (Charles Waters), notable poets bring cultural destinations, historical sites and beautiful landscapes of the United States to life. This is a great picture book to combine 4th grade poetry unit with USA geography! Two for one! [poetry picture book, ages 6 and up]

I Am Jackie Robinson (Ordinary People Change the World) by Brad Meltzer, illustrated by Christopher Eliopoulos

A life is not important except in the impact it has on other lives. Jackie Robinson

Combining both a picture book and graphic novel format, this is a “reluctant reader-friendly” biography of Jackie Robinson though one could argue that he was not simply an ordinary person. A talented athlete, he became the first UCLA student ever to letter in four sports — baseball, football, basketball, and track — in the same season! But it is baseball that called upon Jackie, and his willingness and courage to be first that changed history when he became the first African American ever to play major league baseball. [picture book, ages 6 and up]

March: Book One by John Lewis and Andrew Aydin, illustrated by Nate Powell

John Lewis is one of the icons of the Civil Rights movement. This first book tells his story in a graphic novel format. Book One spans John Lewis’ youth in rural Alabama, his life-changing meeting with Martin Luther King, Jr., the birth of the Nashville Student Movement, and their battle to tear down segregation through nonviolent lunch counter sit-ins, building to a stunning climax on the steps of City Hall. [graphic novel, ages 9 and up]

After the success of the Nashville sit-in campaign, John Lewis is more committed than ever to changing the world through nonviolence — but as he and his fellow Freedom Riders board a bus into the vicious heart of the deep south, they will be tested like never before. Faced with beatings, police brutality, imprisonment, arson, and even murder, the movement’s young activists place their lives on the line while internal conflicts threaten to tear them apart. [graphic novel, ages 9 and up]

As Fast As Words Could Fly by Pamela M. Tuck, illustrated by Eric Velasquez

What is it like to attend a desegregated high school? Pamela Tuck tells the story of her father and how he won a typing contest with a lot at stake. The county typing tournament is a contest that is measurable and not subjective. Her father, Mason, decides to take a stand, using his skills to triumph over prejudice and break racial barriers. [advanced picture book, ages 7 and up]

Separate is Never Equal: Sylvia Mendez and Her Family’s Fight for Desegregation by Duncan Tonatiuh

The battle for Civil Rights was fought not just in the Deep South but also in Southern California near where I grew up. It also was fought by browns as well as blacks. Almost 10 years before Brown vs. Board of Education, Sylvia Mendez and her parents helped end school segregation in California that was aimed against Hispanic Americans. This is hidden figure shows the depth and breadth of the Civil Rights Movement. [picture book, ages 7 and up]