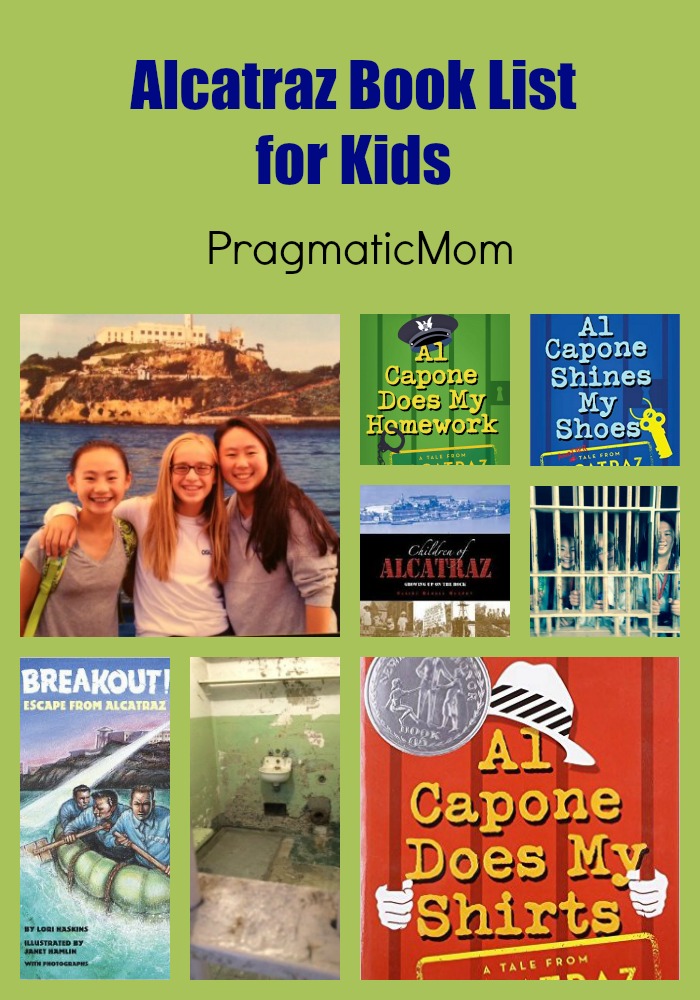 My girls visited Alcatraz this past summer and it didn’t freak them out. I wondered if it would. PickyKidPix has been obsessed with psychics and mediums lately, and watches Lisa Williams a little too much. It could be that we live in a old house which is NOT haunted but there are certainly stories of houses in our neighborhood that could very well be cohabited with ghosts. Still, it would be easy to get creeped out by seeing a jail cell in Alcatraz. Isn’t it exactly like a movie set of what a prison cell should look like? I guess it’s good that they visited in broad daylight! The breakfast menu for that day is preserved too. It doesn’t sound like prison food, don’t you think?! Or maybe this was a special “closing down Alcatraz” breakfast for the inmates? The person to ask would be this guy: William Baker or prisoner #1259. He’s one of last living inmates from Alcatraz and not coincidentally, has a book to describe his experience! My kids bought his book in order to get his signature. Bill Baker writes in the forward, “Every word in this book is true to best of my memory of events and conversations that took place while I was serving time at Alcatraz and that I witnessed with my own eyes and heard with my own ears and felt with my own heart. …

This is a true account of that time in my life when I was a bad boy.

Warning — strong language in character with a prison environment. This account is told from the viewpoint of the Alcatraz convict.” [biograghy, for adults or curious young adults ages 14 and up]

I doubt my teens will read this book but they keep it as part of their Alcatraz memory. Mr. Baker was quite charming to them.

Set a year before Alcatraz closed down, this is the true story of three men’s daring and clever escape from Alcatraz. Three of the men were bank robbers, one was a car thief; all have tried to break of prison before. In twenty-eight years, noy one prisoner has escaped from Alcatraz alive. The waters are treacherous in the icy bay with dangerous currents that can pull a man under. Will these prisoners succeed? [early chapter book, ages 7 and up]

The Children of Alcatraz: Growing Up on the Rock by Claire Rudolf Murphy

Alcatraz was home to infamous criminals that included Al Capone, Machine Gun Kelly and the Birdman of Alcatraz, but it was also home to the children of of Native Americans, lighthouse keepers, military soldiers and prison guards. Some of the interesting events include:

The Al Capone trilogy by Gennifer Choldenko is an excellent series for an advanced middle grade reader. My daughter and her friends read the first one in 5th grade as part of small group assigned reading. As such, they did not pursue the rest of the series. Their big gripe is that Al Capone is just a whisper of a mention in the book which greatly disappointed them.

I think the special needs character, Moose’s sister Natalie, and what life was like in  1935  for kids who has autism is especially poignant.

Al Capone Does My Shirts by Gennifer Choldenko

Today I moved to a twelve-acre rock covered with cement, topped with bird turd and surrounded by water. I’m not the only kid who lives here. There’s my sister, Natalie, except she doesn’t count. And there are twenty-three other kids who live on the island because their dads work as guards or cook’s or doctors or electricians for the prison, like my dad does. Plus, there are a ton of murderers, rapists, hit men, con men, stickup men, embezzlers, connivers, burglars, kidnappers and maybe even an innocent man or two, though I doubt it. The convicts we have are the kind other prisons don’t want. I never knew prisons could be picky, but I guess they can. You get to Alcatraz by being the worst of the worst. Unless you’re me. I came here because my mother said I had to. [chapter book, ages 10 and up]

Moose and the cons are about to get a lot closer in this much-anticipated sequel.

It’s 1935. Moose Flanagan lives on Alcatraz with his family, the other families of the guards, and a few hundred no-name hit men, con men, mad dog murderers and a handful of bank robbers too. And one of those cons has just done him a big favor.

You see, Moose has never met Al Capone, but a few weeks ago Moose wrote a letter to him asking him to use his influence to get his sister, Natalie, into a school she desperately needs in San Francisco. After Natalie got accepted, a note appeared in Moose?s freshly laundered shirt that said: Done.

Al Capone Does My Homework by Gennifer Choldenko

Alcatraz Island in the 1930s isn’t the most normal place to grow up, but it’s home for Moose Flanagan, his autistic sister, Natalie, and all the families of the guards. When Moose’s dad gets promoted to Associate Warden, despite being an unlikely candidate, it’s a big deal. But the cons have a point system for targeting prison employees, and his dad is now in serious danger. After a fire starts in the Flanagan’s apartment, Natalie is blamed, and Moose bands with the other kids to track down the possible arsonist. Then Moose gets a cryptic note from the notorious Al Capone himself. Is Capone trying to protect Moose’s dad too? If Moose can’t figure out what Capone’s note means, it may be too late.