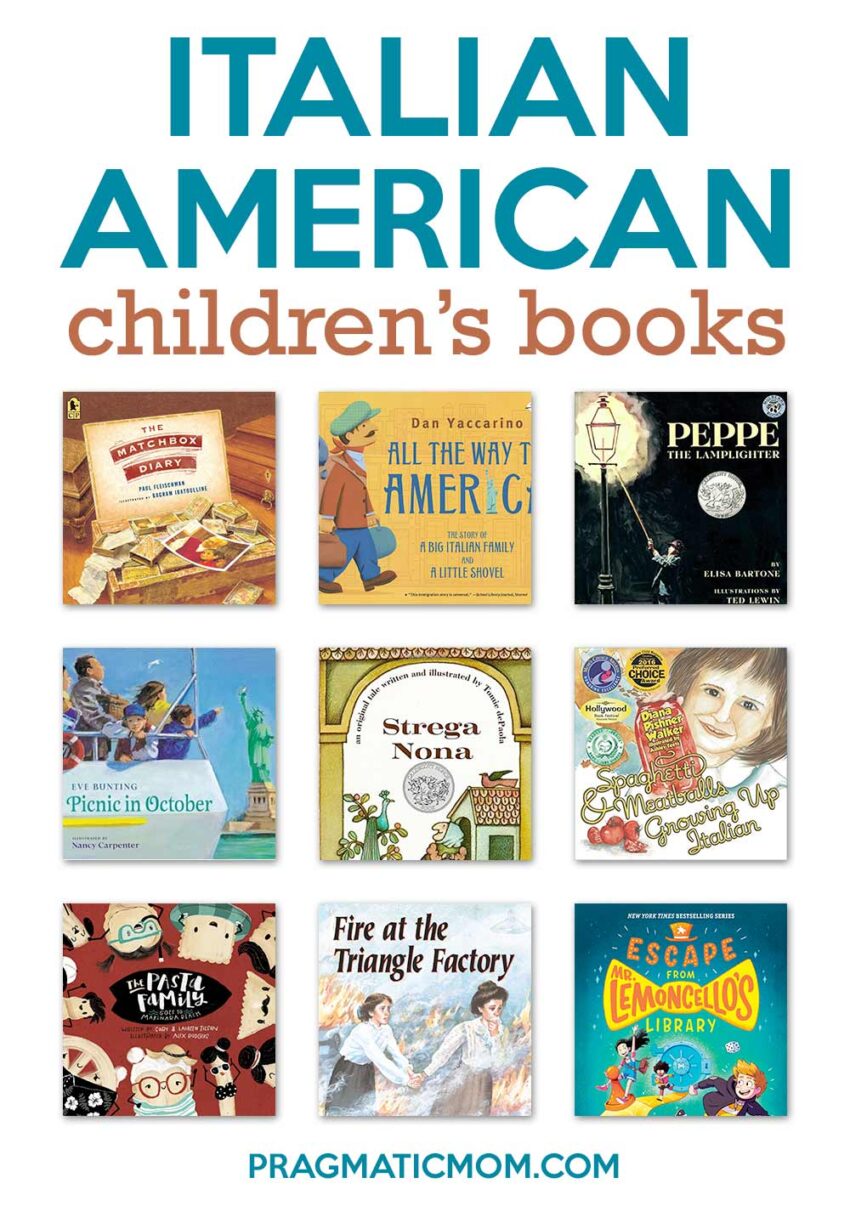 I didn’t grow up around Italian Americans in Southern California but I am fascinated by their strong sense of La Famiglia. My boxing gym is owned and run by a bevy of Italian American cousins, half-brothers, and brothers who speak a distinct dialect called The Lake language. Their most famous cohort is Matt LeBlanc from the sitcom Friends. From PBS: The Italian Americans: La Famiglia. This entertaining and enlightening four-part documentary series tells the story of the Italian immigrants who came to America and how they made their mark on the nation’s society and culture.

I had such a hard time finding children’s books with Italian American characters. Can you please help me out with more suggestions? Thank you!!

The Matchbox Diary by Paul Fleischman, illustrated by Bagram Ibatouline

All the way to America: the story of a big Italian family and a little shovel by  Dan Yaccarino

This is Dan Yaccarino’s story of his family’s immigration to America from Sorrento. It all started with his great-grandfather Michele Iaccarino who came over with just a few items: a little shovel, his mother’s recipe for tomato sauce, and some family photographs. Every forget your family but remember to enjoy life, his parents advised him. That little shovel worked and worked … first at a bakery measuring out flour and sugar, then at a pushcart measuring out dried fruit and nuts, next at Italian market measuring out beans, macaroni, and olives, onward to a barbershop measuring out rock salt for the snow, and finally at Dan Yaccarino’s terrace garden. [picture book, ages 4 and up]

Peppe the Lamplighter by Elisa Bartone, illustrated by Ted Lewin

This Caldecott Honor book from 1994 tells the story of a young Italian boy who works lighting the street lamps to support his family — six sisters and his sick father. His father is angry that his son has this job because he hoped for a better life for his children. His father’s disappointment tears at Peppe’s heart until one day, he stops doing it. Tonight though, his little sister outside and afraid of the dark. His father begs him to light the lamps and, for the first time, Peppe gets his father’s approval. When he finds his sister, she tells him that he has the best job in America because he scares the dark away. Peppe finds joy in the job again, lighting each lamp, pretending that it’s a beacon of promise for tomorrow. [picture book, ages 6 and up]

A Picnic in October by Eve Bunting

Grandma insists on celebrating her birthday on Liberty Island every year in October despite the cold. She explains to her grandkids:

“When I came from the old country,” Grandma says, “I came here and I said: ‘Thank you, Lady Liberty. Thank you for taking me in.’ I spoke in Italian, of course, but she understands all languages. ‘This is America and I am here and I am a part of it,’ I thought.”

And now, standing before Lady Liberty with family, Tony, her grandson, finally understands what it means to their grandmother. [picture book, ages 6 and up]

American Too by Elisa Bartone, illustrated by Ted Lewin

The 89th Annual Feast of San Gennaro will be held in Little Italy for 11 days from Thursday, September 10, through Sunday, September 20, 2015, on the streets of historic Little Italy, the lower Manhattan neighborhood which served as the first home in America for hundreds of thousands of Italian immigrants who came here seeking to improve their lives beginning in the early part of the 20th century. from San Gennaro

Set just after WWI, Rosina and her family have immigrated from Italy to New York City. When she encounters girl bullies on the street that make fun of her red coral horn necklace that she wears to ward off the evil eye, Rosina rejects anything that is “too Italian.” The Feast of San Gennaro is a big event in her neighborhood and Rosina is chosen to be the queen of the feast. It’s an honor that is very Italian but she has an idea of how to show everyone that she’s a modern American. [picture book, ages 6 and up]

Strega Nona magical pasta pot intrigues her helper, Big Anthony. It never gets empty and Big Anthony is always hungry. One day when Strega Nona leaves her house in Calabria to visit Strega Amelia, Big Anthony thinks he can use magic too to make the pot produce pasta. It works a little too well but luckily Strega Nona is back to fix the mess. [picture book, ages 4 and up]

The Pasta Family (Goes to Marinara Beach) by Cory and Laureen Tilson, illustrated by Alex Rodgers

It’s a pasta family that goes on an outing to a beach. Various pasta shapes are each characters in this fun picture book of a surfing competition. [picture book, ages 4 and up]

Minnie and Tessa are unlikely friends because it isn’t easy for an Italian American Catholic girl and a Jewish girl to be friends in 1911. But they are both fourteen-years-old sit side by side working as sewing operators in a factory with dangerous working conditions. When a big fire breaks out at the Triangle Shirtwaist Company, their friendship, and quick thinking save them from perishing in the deadliest industrial disaster in the history of New York City. [early chapter book, ages 6 and up]

Luigi Lemoncello, a board game and gaming mogul genius, is also the benefactor of the local library that he grew up at. When the new library opens, he invites twelve 12-year-olds to spend the night at the library playing games to win prizes. For Kyle and his friends, this is the game of a lifetime!

My son is reading loves group challenge contest books like The Candymakers by Wendy Mass and Cosmic by Frank Cottrell Boyce. He says Luigi Lemoncello reminds him of Luigi in Mario Kart games. [chapter book, ages 8 and up]

Kimchi and Calamari by Rose Kent

Joseph Calderaro is thrown by an English essay assignment about his ancestors. Suddenly, his sense of family and his identity are in question. His parents are Italian American but he’s adopted from Korea so he can’t really be Italian American. Or can he? Would tracking down his birth mother in Korea help him discover the meaning of family and ancestry? [chapter book, ages 8 and up]