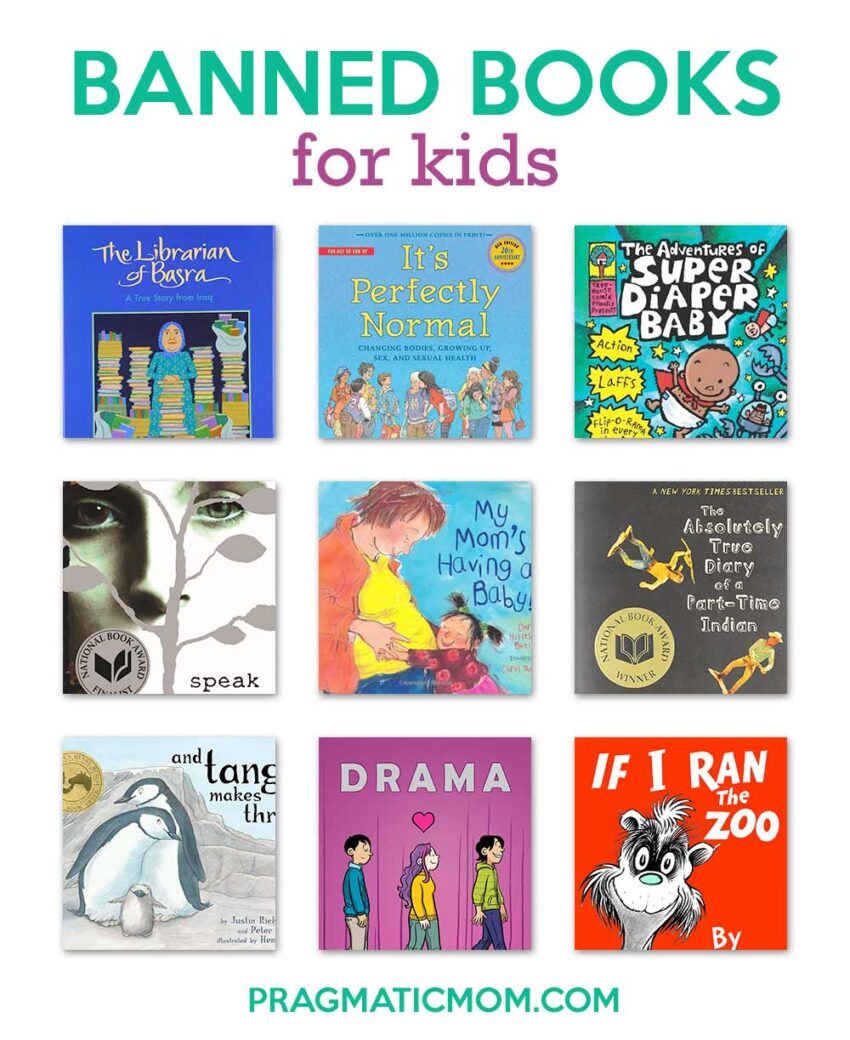 Censorship makes me angry (but many things do) and it tends to make me go on the offensive. Instead of my diatribe, I found some words of wisdom by authors on how to handle censorship.

Censorship is the child of fear and the father of ignorance.

Most of the censorship I see is fear-driven. I respect that. The world is a very scary place. It is a terrifying place in which to raise children, and in particular, teenagers. It is human nature to nurture and protect children as they grow into adulthood. But censoring books that deal with difficult, adolescent issues does not protect anyone. Quite the opposite. It leaves kids in darkness and makes them vulnerable.

from author Laurie Halse Anderson in the back notes of Speak Banned Books Week is an annual event celebrating the freedom to read. Typically held during the last week of September, it highlights the value of free and open access to information. Banned Books Week brings together the entire book community –- librarians, booksellers, publishers, journalists, teachers, and readers of all types –- in shared support of the freedom to seek and to express ideas, even those some consider unorthodox or unpopular. from ALA

My Top 10 Banned Books That Kids SHOULD Read!

10. The Absolutely True Diary of a Part-Time Indian by Sherman Alexie*

*Sherman Alexie has been accused of sexual misconduct by multiple women

Rather than an anti-family, culturally insensitive, violent book about bullying, this book is a story of hope and of rising from the worst of conditions that are, itself, a miracle. [notebook novel, ages 12 and up]

9. And Tango Makes Three by Justin Richardson and Peter Parnell

Silo and Roy are two male chinstrap penguins that live in New York City’s Central Park Zoo. They do everything together: the bow to each other, walk together, sing to each other, swim together, and nest together. When Betty, another penguin, laid two eggs, Mr. Gramzay brought the egg to Roy and Silo’s nest where they successfully hatched it … and became a family. [picture book, ages 4 and up]

Let’s be clear. Drama is not sexually explicit. There is kissing, yes, but it stops there. What is banned and/or challenged about this book, I believe, is homosexuality depicted in this book. High school boys discover their sexual identity while working on a musical. Their story is a substory but I think it is what is drawing the ire.

Those who oppose homosexuality don’t realize that kids today are totally ok with LGBT. [graphic novel, ages 12 and up]

It was well-known that Dr. Seuss was an eager American propagandist during World War II who depicted Japanese civilians and soldiers as buck-toothed grotesqueries, though Hitler and his German high command got some of that treatment, too. from Pittsburgh Post Gazette

I just figured this out: Yes, Dr. Seuss, lovable Theodor Geisel, was racist. Here are more of the racist cartoons he created.

During the war, Seuss defended his anti-Japanese view, according to his biographer Richard H. Minear:

“… right now, when the Japs are planting their hatchets in our skulls, it seems like a hell of a time for us to smile and warble: “Brothers!” It is a rather flabby battle cry. If we want to win, we’ve got to kill Japs, whether it depresses John Haynes Holmes or not. We can get palsy-walsy afterward with those that are left.” from Business Insider But I think the anti-Asian line in If I Ran the Zoo is a good discussion point, particularly if your children are Asian American to show them that racism exists. This line aside, If I Ran the Zoo is still one of my favorite Dr. Seuss stories. [picture book, ages 4 and up]

Reasons: Challenged, but retained at the Vancouver, Canada, Public Library (2014) despite a line in the poem about helpers who “all wear their eyes at a slant,” accompanied by illustrations that are racial stereotypes of Asians. The book is often credited with the first printed modern English use of the word “nerd” in a sentence. The library will no longer read it at storytime or promote it other than as resource material in a study of how the portrayal of other cultures has changed over time.

I frankly find it more disturbing that two young kids are left alone and open the door to a complete wacko stranger that trashes their house after releasing two more goons into their home.

The cubs hop on pop and whack each other with tennis rackets. I don’t see a reason to challenge this but it’s not much of a story so I would avoid it for that reason. [picture book, ages 2 and up]

Reasons: Challenged, but retained at the Toronto, Canada, Public Library Reasons: (2014) despite a patron’s concern that the book “encourages children to use violence against their fathers.” The patron requested that the library apologize to local fathers and pay damages resulting from the book’s message. Written in 1963, the classic children’s picture book ranked sixteenth on Publishers Weekly’s 2001 list of the all-time best-selling hardcover books for children. Based on a 2007 online poll, the National Education Association named the book one of its “Teachers’ Top 100 Books for Children.”

5. The Librarian of Basra: A True Story from Iraq by Jeanette Winter

I actually think this book is about the heroism of a singular person, a female librarian in Iraq, who risked her life to save the books in her library. I didn’t think it was inappropriately violent. You can judge for yourself. [picture book, ages 5 and up]

Reasons: Challenged in Johnson City, N.Y. schools as a suggested reading (2013) because of violent illustrations and storyline. The book is about a librarian who sneaks books out of a library during the U.S. bombings in Iraq. The librarian works with members of the community to keep the books safe until the war is over and a new library can be built.

The ancient Greeks thought that love between two men was the highest form of love.

I think the illustrations and accurate, lucid answers to questions kids about sexuality are what makes this book so helpful. The explicit illustrations that make this book challenged pertain to human anatomy but it’s appropriate for a book on sex education! There is a chapter on Straight and Gay: Heterosexuality and Homosexuality that I wonder is also why this book is challenged?! [nonfiction, ages 10 and up]

Reasons: Challenged, but retained at the Lee County, Fla. libraries (2011) despite the book’s explicit illustrations.

3. The Adventure of Super Diaper Baby by Dav Pilkey

My son is a big fan of Dav Pilkey and of this particular book in general which he bought at his elementary school’s book fair. I am ok with the phrase “poo poo head.”

This is what Urban Dictionary says:

poopoo head
used in first grade but for people like me i still use it
[graphic novel, ages 6 and up]

According to the U.S. Department of Justice, 44 percent of rape victims are under the age of 18 and 46 percent of rape victims are between the ages of 12-15. It makes adults uncomfortable to acknowledge this, but our inability to speak clearly and openly about sexual issues endangers our children. It is immoral not to discuss this with them. Laurie Halse Anderson in Speak back notes. [young adult, ages 12 and up]

Reasons: Challenged in the Republic, Mo. schools (2010) because it is “soft-pornography” and “glorifies drinking, cursing, and premarital sex.”

1. My Mom’s Having a Baby by Dori Hillestad Butler

This informative picture book is consistently on the banned and challenged book list every year. It’s challenged because “it’s is inappropriate for children” which is to say that it is inappropriate for parents who want their kids to think they were delivered by storks and find human anatomy embarrassing. For everyone else, this picture book gives an accurate view of how babies are made. It’s the kind of story that you read to a child and while they understand the entire process, it becomes demystified and therefore “boring.” I’m ok with that. [picture book, ages 4 and up]

Here’s what author Dori Hillestad Butler has to say about authoring a challenged book:

What do I have to say about that?

I know some parents would choose not to answer a question like “how do Dad’s sperm and your egg get together?” But that has never been my philosophy. I believe in giving children honest, accurate information, as much or as little as they want, whenever they ask for it. When it comes to questions about where babies come from, some children are satisfied with a simple one sentence response; others need more. In our house, if a child was mature enough to ask the question, he was mature enough to receive an answer. We wanted our kids to know that no matter what the question, they could always come to us, and we would take the question seriously and answer openly and honestly to the best of our ability. Yes, even if it was a question about S-E-X and even if it was asked at a very young age. from Write All The Words

Reasons: Challenged in the Carrollton, Tex. Library (2011) because it is inappropriate for children. The book won an Editor’s Choice award from Booklist in 2005 and was named a Top Ten Sci-Tech book for Youth by Booklist. Retained at the Hillsborough County, Fla. Public Library System (2011). Published in 2005, the book tells of a little girl named Elizabeth who is curious about childbirth and how her mother became pregnant. Throughout the book’s thirty pages, little Elizabeth learns about these topics in great detail.