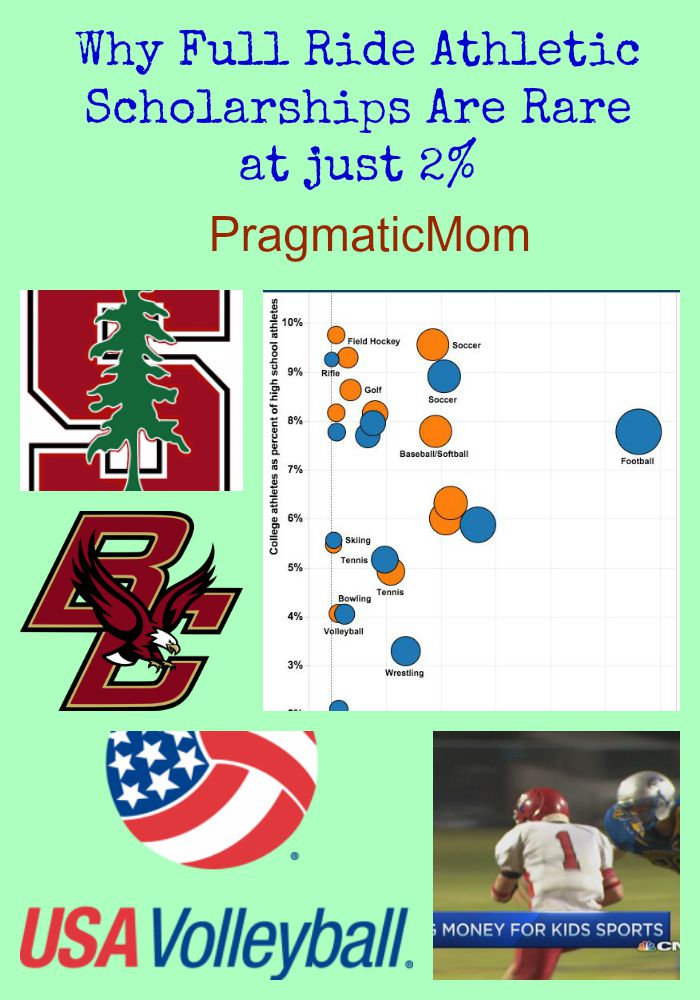 My kids have been playing club sports for a few years now. When I meet parents on the sidelines (especially from other teams), I get the impression that their intensity reflects a belief that sports are a ticket to college. It could be that it’s their golden ticket into a college, but I hope it’s not because parents think it will also pay for college.

…odds of a high school athlete getting a sports scholarships is 2%, but the odds are far worse on getting a full-ride.

More than 600,000 girls competed in track and field in high school while there were only 4,506 scholarships. These scholarships were split among 9,888 athletes and the average award was $8,105.

These are dreadful odds. from The College Solution

Just 3.3 percent of high school seniors playing men’s basketball will have roster positions on NCAA teams as freshmen—with or without scholarships, according to NCAA data. For women, the figure is 3.7 percent.The odds are almost as slim in men’s soccer, football, and baseball. The chance of getting an athletic scholarship is even smaller, even for students whose parents can devote the hundreds of hours–and thousands of dollars–that high-level youth sports often require.

Put another way, the odds of landing a college scholarship in many major sports are lower than the chances of being admitted to Harvard, Yale, Princeton or Stanford. from CNBC

It’s true that some sports are easier than others to get than others. Here’s the stats on that by sport, broken down by boys versus girls. But even this is deceptive. PickyKidPix‘s club soccer team has an Academy Team for boys (but not girls). There are only two Academy teams in Massachusetts where the best players compete for a spot. Here’s where the graduating seniors landed:

Here is what the website said about the new Eagles:

Ed Kelly has added a twelve member recruiting class that he hopes will give the Eagles the edge they need on both sides of the ball to get back into the NCAA Tournament field in 2015 after a two-year absence. Forward Simon Enstrom from Sweden, midfielder Joshua Forbes from Germany, defender Rodolfo Postigo from Venezuela and midfielder Raphael Salama from Spain are among the international players in the class who have the potential to make an impact. Forward Tommy Garcia-Morillo out of the Weston FC Academy and Gulliver Preparatory is among other members.

It’s true that everyone know someone who is heavily recruited. Where I live, this accolade belongs to Athena Ardila with more than two dozen scholarship offers at Division 1 schools for volleyball. Her serve has knocked out more than one libero unconscious. She’s also on the pre-Olympic team and trains in Colorado Springs. If you are the best in the world in your age group, you can ignore this post. For everyone else though, it’s time to hit the books.

p.s. I have a related posts here:

How To Get An Athletic Scholarship

How to Get Into College: Admissions Revolution

How To: Pay for College with Dr. Michele Borba 6 thoughts on “Why Full Ride Athletic Scholarships Are Rare”