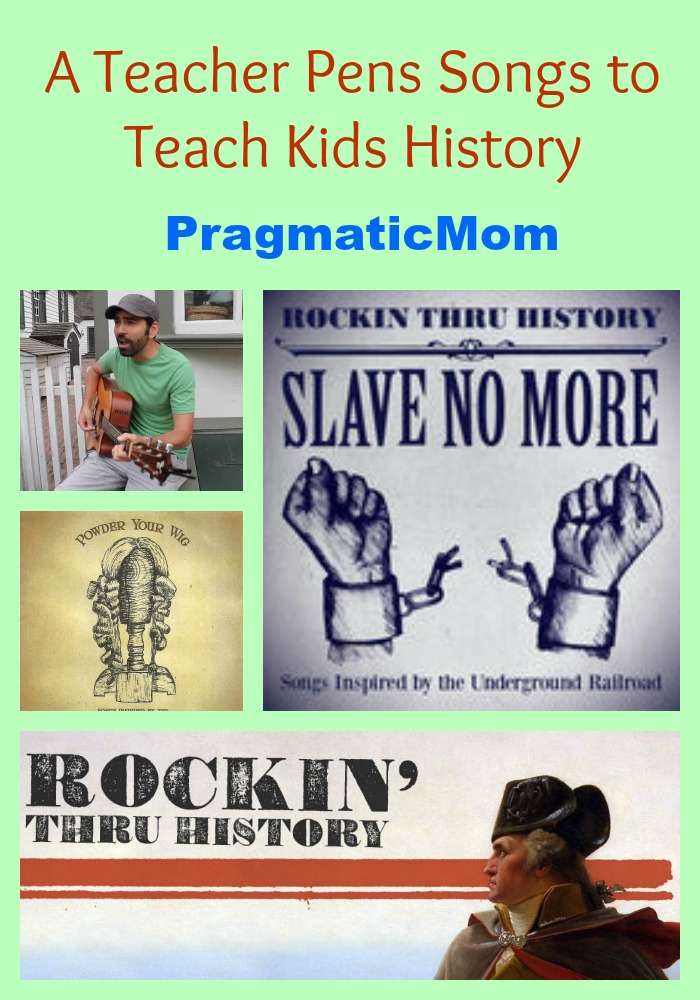 Please welcome my guest author, 5th grade teacher Damien Drago today. He found a unique way to get his students excited about history: he writes and performs songs about American history! I distinctly remember racking my brain thinking of ways to make my fifth-grade social studies lesson a little more lively. How could I get ten-year-olds to understand the indignation patriots felt toward King George and Parliament?

What might I say to those ruling bodies if I lived during the Revolutionary time period? A mocking, made-up expression, “Go powder your wig!” began ringing in my head. I imagined telling off those fancy-pants, elite tyrants with that phrase.

At some point, I grabbed my guitar and penned a song called “Powder Your Wig.” Its purpose was to summarize the war’s causes and to evoke an emotional response from my students. Well, that song was a hit in my little world of thirty students. Not only did my children learn the causes of the war, but they were excited for social studies and to sing along when I broke out the guitar.

This prompted me to write a few more songs that would encapsulate the major aspects of the Revolutionary War. Those too were popular amongst my students and something I call Rockin’ Thru History was born.

The culmination was the release of my first “educational rock” CD entitled Powder Your Wig: Songs Inspired by the American Revolution. In it, I’ve attempted to take important, fascinating, and amazing details about our nation’s founding and fit them into fun, catchy, and summarizing songs. It seems to get elementary school kids excited and I’ve been singing in libraries, folk-festivals, schools, and other places ever since

In preparing and researching for my next songwriting project which I thought would relate to the Civil War, I began pouring over books about American slavery. After reading A Narrative of the Life of Frederick Douglass, I decided to take a little detour from my original plan. The book simply knocked me off my feet.

I came away realizing that every American student needed to know more about this great man. There is true power in his retelling of the fact that he was purposely torn from his mother before he could grow attached to her. Amazingly, he taught himself to read and write because he realized the tremendous power of words and knowledge. The day he decided he would no longer be a slave under any circumstances gripped me made me want to shift my focus for the next album.

With the help of some other amazing books like Bound for Canaan: The Epic Story of the Underground Railroad, America’s First Civil Rights Movement by Fergus Bordewich and To Purge this Land with Blood by Stephen B. Oates, I wrote seven original songs that tell the story of the Underground Railroad and some of its heroes. I sing about larger-than-life people like Douglass, Harriet Tubman, and John Brown but also about normal, everyday people who knew, deep down in their hearts, that equality is something that should belong to every American.

My album Slave No More: Songs Inspired by the Underground Railroad just came out in the spring and I’m in the middle of a busy summer singing at many of our local libraries here in Eastern Pennsylvania. When I have the privilege to perform, I love scanning the audience of little faces during the show. Clearly, some of those young readers are affected by the stories I tell through music.

My hope is that a spark gets lit and flames are fanned for further study and reading about the Underground Railroad. I have a deep conviction that it can be a unifier for our students who find themselves in an increasingly tumultuous and divisive time period in our culture.

As an educator and musician, there is tremendous satisfaction I feel when I hear little voices singing Rockin’ Thru History songs or when I see students with books about what we’ve been singing. There is something special when they share the impact of these incredible stories from history. When I first picked up my guitar thinking about King George, I never would have thought it could have developed into this second, fun-filled job in which I get to teach more American history to more children. I am very grateful for the opportunity and look forward to more songs that tell the story of the nation we call home!

Damien Drago has been a 5th Grade, public-school teacher for the last 13 years. He’s also a musician and songwriter who will sing about American history wherever he can get on a stage. Married to Audrey for the last 14 years, he has five amazing children (and one on the way). The Dragos make their home in Shillington, Pennsylvania. You can find out more about Damien’s work and music at his website. 6 thoughts on “A Teacher Pens Songs to Teach Kids History”