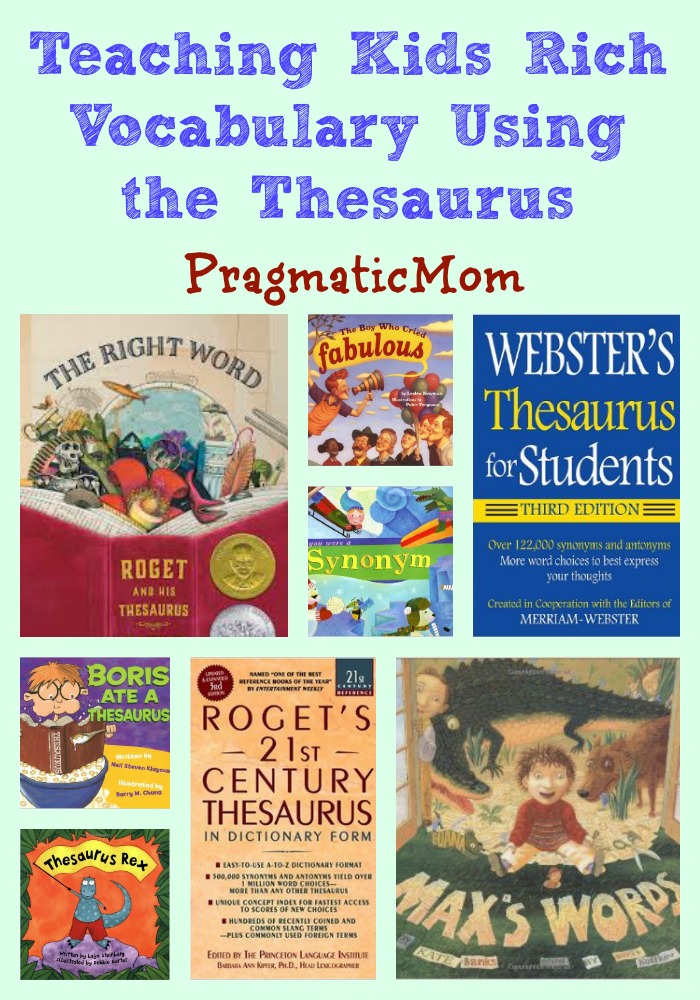 To appreciate the stuffy Thesaurus, it might help kids to read about the man behind the tome. His story is beautifully told in the non-fiction picture book, The Right Word.

How to Find the Right Word

The Right Word: Roget and His Thesaurus by Jen Byrant, illustrated by Melissa Sweet

Peter Mark Roget (pronounced “Roh-zhay”) was born in 1779 and lived to be 90 years old! His father died when he was only 4-years-old in 1783. His family moved often, making it hard for him to make friends. When he was 8-years-old, he started making books of lists. When Peter was older, he became a doctor but he kept on working on his word lists at night. Finally, Peter’s kids convinced him to publish his book in 1852. It’s still selling today, helping everyone find the right word!

Roget’s 21st Century Thesaurus is the simple, reliable way to find the perfect word for your needs. It has over 1 million words which is more words than any other thesaurus!

This volume is for students and has 122,000 synonyms, antonyms, and related words.

You can find a free Thesuarus online too!

Max’s brothers collect stamps and coins and he wants to collect something special too. He decides to collect words, cutting them from magazines and newspapers. He also writes down bigger words he finds on scraps of paper. At first, his brothers scoff at his collection, refusing to trade words for a coin or stamp but when Max shows his brothers the power of words by creating stories, they are thrilled to exchange! [picture book, ages 4 and up]

Synonyms remind Boris of cinnamon buns so naturally, that makes him hungry at school. Hungry enough to eat a Thesaurus. Eating so many words gives him a mild case of worditis causing him to speak in synonyms. Word quickly spread about Boris and soon the president of the United States wants to meet him and have him give a speech. Boris’ words are starting to disappear, evaporate, vanish … Will he be able to give the speech? [picture book, ages 4 and up]

The Boy Who Cried Fabulous by Lesléa Newman

Roger is easily distracted by the world around him which makes him chronically late, to the annoyance of his parents. But how can he resist so many fabulous items in a store or park? When his parents restrict him from overusing the word “fabulous”, his tardiness continues because he just substitutes the word “marvelous”. When a parade passes by, Roger breaks out new adjectives and, to his surprise, his parents are delighted … with the new words and with the wonders he presents that they can finally understand and participate in. [picture book, ages 3 and up]

When Rex the dinosaur goes exploring, his action is also interesting words like extending, swill, foraging, rollick, slither, and scour. Playing with words can be just as much fun and playing outside! [picture book, ages 4 and up]

If You Were a Synonym by Michael Dahl, illustrated by Sara Gray

If you wre a synonym, you could change and still mean the same thing.

If you were a synonym, you could act as different parts of speech.

If you were a synonym, you would be found in a thesaurus.

Not sure what a synonym is? This picture book demonstrated with examples and whimsical collage artwork.

How to Use a Thesaurus

Now that you know all about the Thesaurus, let’s start by looking at your story and identifying words that could be more interesting. Let’s look them up in your Thesaurus. How exactly do you use all those related words? Let’s think about a few things:

A synonym is a word that has the same, or nearly the same, meaning as another word.

When you are trying out a new word, the first thing you should do is put it into a sentence. Does it sound right? If you are not sure, you can look up how the word is used in a sentence. Now try it in your sentence. Is it working?

This game is from If I Were a Synonym:

Have a group of friends split up into two teams. Next, have each group write a different word on 10 pieces of paper. Adjectives work best.

One team starts by drawing a piece of paper. They say the word out loud. Fr exmaple, one team might draw “big.” Then the other team must think of a synonym for “big.” They might say “huge.” The teams go back and forth, naming synonyms for “big,” until one team is stumped. The team to think of the last synonym gets a point and gets to draw again.

This post is part of a four-part series to help PickyKidPix with her writing, and hopefully other kids too on: