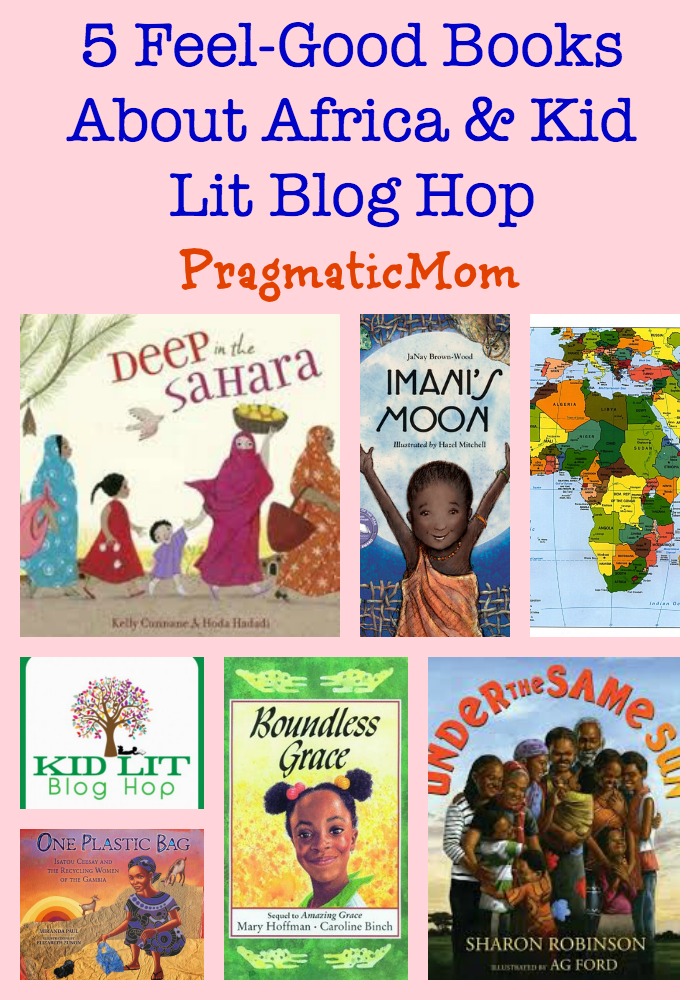 I know very little about the continent of Africa so today I wanted to explore it through picture books. These five books show different perspectives from the story of young Masaii girl who wants to touch the moon to visiting family in Tanzania and The Gambia. I was surprised to learn that the people in Mauritania, West Africa are Muslim and that Jackie Robinson’s daughter wrote a book about her mother. Finally, there’s the true story of Isatou Ceesay and the Recycling Women of the Gambia who turn trash into treasure with an ecological bent.

I hope you enjoy this five book trip to Africa too! What are your favorite books on Africa? Please share! Thank you! Under the Same Sun by Sharon Robinson, illustrated by AG Ford

Sharon Robinson is the daughter of baseball great Jackie Robinson but this story is not about her famous father but about her brother who moved to Tanzania in search of a new life in East Africa. Sharon and her mother make frequent visits to see her brother and his family and this picture book celebrates the simple life there … the markets filled with fresh produce, the Serengeti National Park and Bagamoyo, a slave trading post on the coast. In a full circle from slavery to returning to Africa, Under the Same Sun celebrates family, both past and present.  Sharon wanted to pay tribute to her little mentioned but indomitable mother in this book. [picture book, ages 4 and up]

Anyone short of stature — I can relate — will love this picture book of little Imani who gets teased for her size but fosters big dreams thanks to the role models her Masaii mother presents to her in the form of African folk tales. There’s Olapa the goddess of the moon who defeated the god of the sun, and Anansi, the small spider who captured a snake. But it’s the older boys who are young warriors performing adumu, the jumping dance that inspire Imani the most. She decides she can reach the moon by jumping, jumping, jumping high into the sky. And, because she believes in herself, she does just that! [picture book, ages 4 and up]

One Plastic Bag: Isatou Ceesay and the Recycling Women of the Gambia by Miranda Paul, illustrated by Elizabeth Zunon

Plastic bags litter the ground in The Gambia and cause problems for both man and beast. The goats die from eating them and mosquitoes flourish from the water trapped and spread malaria. Isatou has an idea.

Holding her breath, she plucks one plastic bag from the pile.

By cutting the bags into strips, Isatou and her friends cut the bags into strips and roll them into spools of plastic thread. They teach themselves to crochet them into bags. Some people in the village laugh at them; others call them “dirty” but the women prevail. They bring them to market and manage to sell them. With this money, Isatou can replace her grandmother’s goat. But even more than that, Isatou has created a cottage industry for women that, by upcycling plastic bags, also helps make her people healthier, wealthier and more self-reliant. [picture book, ages 6 and up]

Grace’s parents are divorced and her father moves to Africa where he re-marries and starts another family. Grace is nervous to go all the way to The Gambia with her nana, but when she sees him in the airport he is the same dad she recognizes. The world around her here is so different. There are sheep the roadside and the market is filled with open air stalls. Grace gets to select fabric for her first African dress. In stories that Grace knows, there doesn’t seem to be any families like hers but families are families the world over, her grandmother reassures her. And Grace resolves to write her own story about her own unique family. [picture book, ages 4 and up]

Deep in the Sahara by Kelly Cunnane, illustrated by Hoda Hadadi

p.s. For July and August, the Kid Lit Blog hop is scaling back to once a month on the second Wednesday of the month. 6 thoughts on “5 Feel-Good Books About Africa”