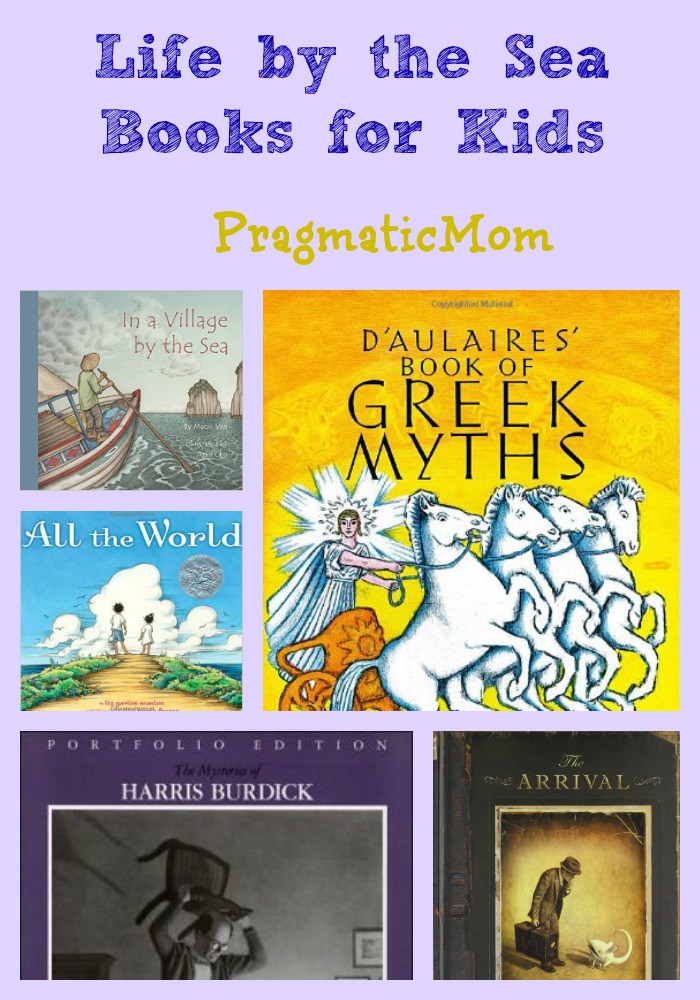 Today, I have guest author team of writer and illustrator Muon Van and April Chu. Their picture book,  In a Village by the Sea, has been described by The New York Times as “Breathtaking” and Publisher’s Weekly (Starred Review) said, it’s a “lovely, resonant portrait of family life that hums with quiet magic.” Life by the Sea Books for Kids

I was first introduced to D’Aulaires’ Book of Greek Myths in elementary school when our class used it as a textbook for our Greek mythology course and it has remained one of my favorite books. What I appreciated most were the charming illustrations that offer the reader an interpretation of the complex narrative. Even as an adult, I still recall closely examining the level of detail in each of the vivid illustrations, making it one of the most memorable books from my childhood. [non-fiction picture book with chapters, ages 8 and up]

The Arrival by Shaun Tan

The Arrival portrays a compelling story of a man’s immigration to a new land in the form of a wordless graphic novel. Shaun Tan’s sepia illustrations are beautiful and extremely detailed. The story panels which resemble a collection of old photographs in a scrapbook, show a variety of perspectives and scale and help set the pace for the story. The reader will not only be intrigued by how realistic the illustrations are but also by the addition of fantastical elements such as the surreal landscapes and alien-like creatures. [wordless picture book/graphic novel, ages 12 and up]

The Mysteries of Harris Burdick by Chris Van Allsburg
The Mysteries of Harris Burdick is one of those books that really sparked my imagination. Each puzzling illustration is accompanied by an equally puzzling title and brief caption that invites readers to come up with their own stories. Chris Van Allsburg’s signature realistic drawings almost look like eerie black and white photographs that you just can’t seem to stop looking at. There is an unexplainable, magical quality in the illustrations that makes the reader want to revisit the book over and over again. [picture book, ages 4 and up]

All the World by Liz Garton Scanlon, illustrated by Marla Frazee
I absolutely love the playful interaction between the words and pictures in All the World. This book is also a great example of how to illustrate a variety of scale, settings, weather, and emotions. With her use of intricate line work and watercolor, Marla Frazee masterfully depicts a busy summer day for a family of four as they drive along a sweeping coastline, try to get shelter from the rain, eat in a cozy, warm cafe, and witness the calm after a storm. [picture book, ages 4 and up]

In a Village by the Sea by Muon Van, illustrated by April Chu

“The illustrations, with strong references to Chinese pen-and-ink landscapes and Japanese woodblock prints of the sea, will draw readers to this book again and again.”
— Kirkus Reviews, starred review

When I first read the manuscript by Muon Van, I knew I wanted to illustrate her story right away. It had all the elements of a classic story but it was also unique and refreshing at the same time. Her circular style of writing inspired me to play around with different angles and perspectives in my illustrations. There was also enough room in the text for me to add another level of detail to the story through my artwork. Much like the illustrated children’s books that have inspired me, Muon and I hope to create a book that readers will want to return to time and time again. [picture book, ages 4 and up] MUON VAN was born on the run in the southern port city of Rạch Giá, Vietnam. When she was nine months old, she left Vietnam as part of the “boat people” mass exodus. She now lives in Northern California with her family, where she gets a glimpse of the sea every morning and every evening. APRIL CHU began her career as an architect with a degree from the University of California, Berkeley, but decided to return to her true passion of illustrating and storytelling. April currently lives and works in Oakland, California.  For more information, visit www.aprilchu.com. 8 thoughts on “Children’s Books About Life by the Sea”