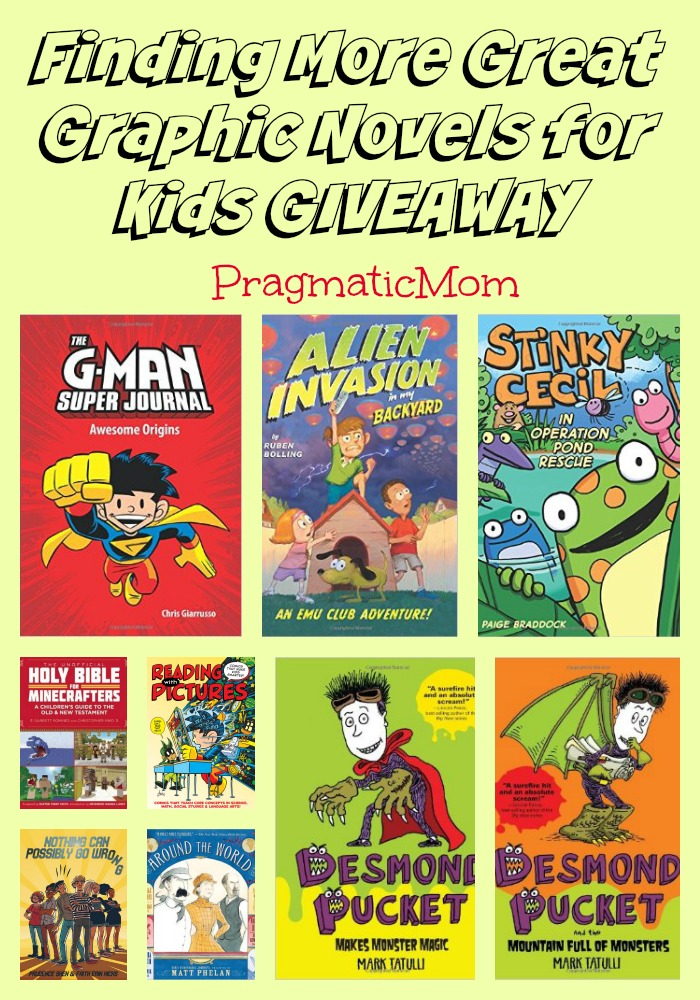 It’s the magic of pictures and words. Words + Pictures = A Game Changer for Readig Comprehension. Not only do kids love graphic novels and notebook novels and will eagerly devour them, but having to figure out the story from the words and the images helps kids develop critical reading comprehension strategies that they will need to employ for school, for life and certainly, for Common Core standardized testing. This kind of reading comprehension strategies transfers to chapter books, non-fiction and all other genres.

To celebrate the educational value + sheer pleasure of graphic novels/notebook novels = reading nirvana, I have a book list below to help you find more graphic novels for your kids based on other books that you might know.

How about you? What graphic novels do you and your kids like and could you please give us the plot with two books? (Or not!) Thanks for sharing!

If you take the friendship and reading level of Frog and Toad Are Friends by Arnold Lobel and add in the environmental message of Hoot by Carl Hiaasan, you get …

Stinky Cecil, a toad, and his animal friends notice a new highway that threatens their pond and are not afraid to take on the machines and humans to save their way of life. One of their friends, a salamander, saves the day in an unexpected way. [graphic novel for newly independent readers, ages 5 and up]

If you take the “every boy” in school of Diary of a Wimpy Kid by Jeff Kinney but add in comic book superheroes such as The Return of Superman (DC Comics) by Dan Jurgens, you will end up with …

Michael G wants superpowers of his own as his friends seem to effortlessly acquire them. He needs some kind of boost given his teacher is out to get him and his older brother picks on him. Could it be that his grandfather’s blanket will unlock his latent superpowers? [notebook novel, ages 6 and up]

Alien Invasion in My Backyard: An EMU Club Adventure by Ruben Bolling

11-year-old Stuart forms The EMU Club with his best friend and little sister in search of Exploration, Mystery and “Unbelieveable,” not realizing that this combination is brewing in his own backyard. When his video game controller goes missing, they discover something unbelieveable in their dog’s doghouse — he’s a computer genius who’s staved off an alien invasion for 500 years. Unfortunately, the aliens arrive and it’s up to The EMU Club to send them home. Will their prowess in a water fight save the day? [notebook novel, ages 7 and up]

The allure of popularity in Big Nate: Say Good-bye to Dork City by Lincoln Peirce combined with a theme park adventure in Kingdom Keepers: Disney After Dark by Ridley Pearson will get you …

Desmond Pucket and the Mountain Full of Monsters by Mark Tatulli

Sixth grader Desmond Pucket has a gift for pulling off “scares.” A “scare” is like a magic trick; it requires a lot of planning and precise execution. All of his life, he’s waited to ride a theme park roller coaster called Mountain Full of Monsters. He wants to ride it with cutie Tina Schimsky — she’s game — but his teacher Mr. Needles is working overtime to prevent him from any fun during their school field trip. And this is his last chance, because the Mountain Full of Monsters roller coaster is coming down. Can Desmond get the ride of dreams, the girl and even possibly, the monsters from the ride? [notebook novel, ages 7 and up]

If you take the daring adventure of Around the World in Eighty Days by Jules Verne and add in three unknown adventures including The Daring Nellie Bly: America’s Star Reporter by Bonnie Christensen which is a picture book biography about a real female reporter who went on a daring around the world trip for a newspaper scoop, you end up with …

Three Remarkable Journeys Around the World by Matt Phelan

There are three true life adventures in this graphic novel of world travel but Nellie Bly is the only female. She raced around the world to beat Jules Verne’s 80 days against another newspaper female reporter adversary. There’s also Thomas Stevens, a miner who wanted something more. He pedaled a giant front wheeled bicycle in all kinds of terrain traversing the world as both adventurer and writer. Finally, sea-captain Joshua Slocum repaired a sloop and then sailed it alone in dangerous seas. [graphic novel, ages 9 and up]

If you take the high school social drama of Drama by Raina Telgemeier and add in a robotics competition that requires know how such as Robotics: Discover the Science & Technology of the Future with 20 Projects by Kathy Ceceri, you will end up with …

It’s the cheerleaders against the robotics team, but not like you’d think. You see, the ex-boyfriend of the head cheerleader is also involved. Who would have thought the basketball captain — who’s afraid of his ex — would side with the robotics squad while being a pawn for the cheerleaders in a school election that will determine which team can make their big competition? For readers who liked Smile and Drama, here’s the most similar graphic novel I can find with high school drama, the kind that is not played out on a stage! [graphic novel, ages 12 and up]

Thank you to AMP! Comics for Kids for sponsoring this giveaway of Stinky Cecil in Operation Pond Rescue and Alien Invasion in My Backyard. To enter, please fill out the Rafflecopter below.