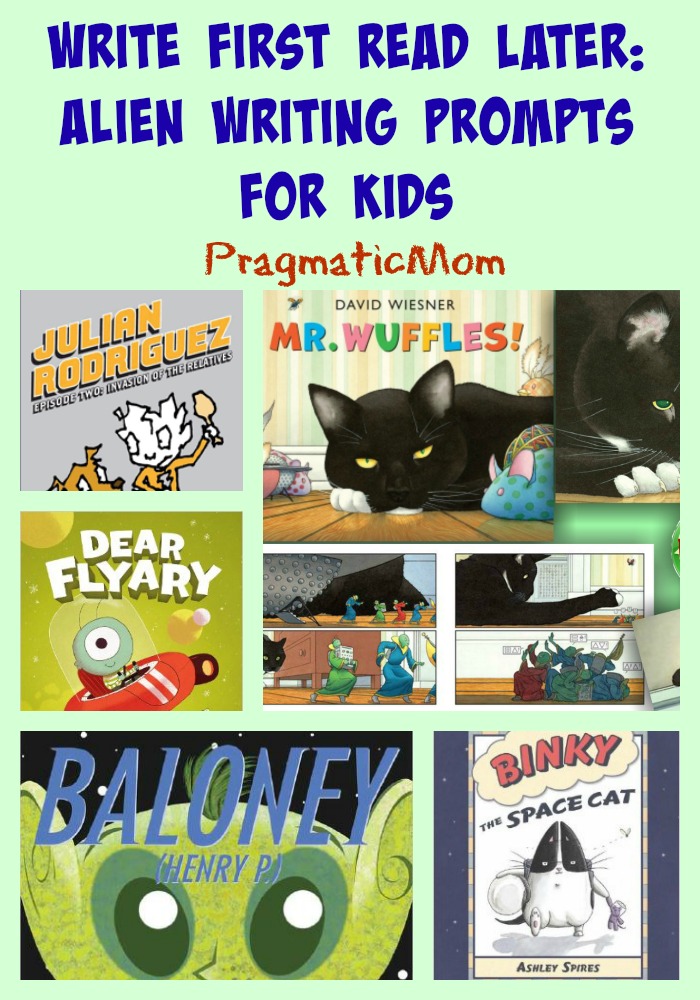 A reader asked me for summer writing ideas and I sent her all the links I could find. It made me think about what a challenge it is to get my own kids writing when they don’t have too so I came up with an idea of Write First Read Later: Writing Prompts for Kids. The idea is fun writing prompts and a book to go along with it either to inspire or just for comparison. This week’s Write Now Read Later is about aliens. I hope to get my son writing this summer too!

Binky is a house cat who thinks he’s protecting the “mother ship” from alien invaders. It’s a short graphic novel series that is funny to boot. [graphic novel, ages 6 and up]

Henry is late for school but he has a whopper of story why it’s not his fault. Jon Scieszka draws on words from many other languages to come up with alien words that do sort of sound like what they mean. [picture book, ages 4 and up]

My son loves this picture book that also includes alien vernacular which is fun to figure out. Bigheart. Laffy. Flyary. You’ll understand these words when you read it!

Frazzle gets a new space vehicle but it starts to make strange noises. Does he need to get a new one or can it be fixed? [picture book, age 4 and up]

Julian Rodriguez is sent from the Mothership to learn about humans and he does this by posing as child in a family. It’s a hilarious early chapter book! [easy chapter book, ages 6 and up]

You can write a story or draw a graphic novel. If you want to share your work, please send it to me (pragmaticmomblog at gmail dot com) and I’ll add it to this post! Thanks!

I just finished this fun chapter book geared towards girls (or anyone who has ever babysat a difficult child). Gabby Duran has some serious babysitting skills. She is in such demand that her younger sister has to keep her schedule and her clientiele includes troublemaking triplets of a movie star in which she is flown to the set via private jet. Word gets out in galaxy that she can handle anything so naturally aliens inhabiting earth come calling offering to pay quadruple the current rate. There are other complications besides the difficult charge to sit; there’s Madison next door who wants to beat her out for the orchestra solo, keeping the alien thing a secret from her friends and family, and the aliens who are trying to kidnap her newest client. Is Gabby up to the task? [chapter book, ages 8 and up]

Getting Kids Writing With a Progressive Story

Getting Kids Published from This Kid Reviews Books