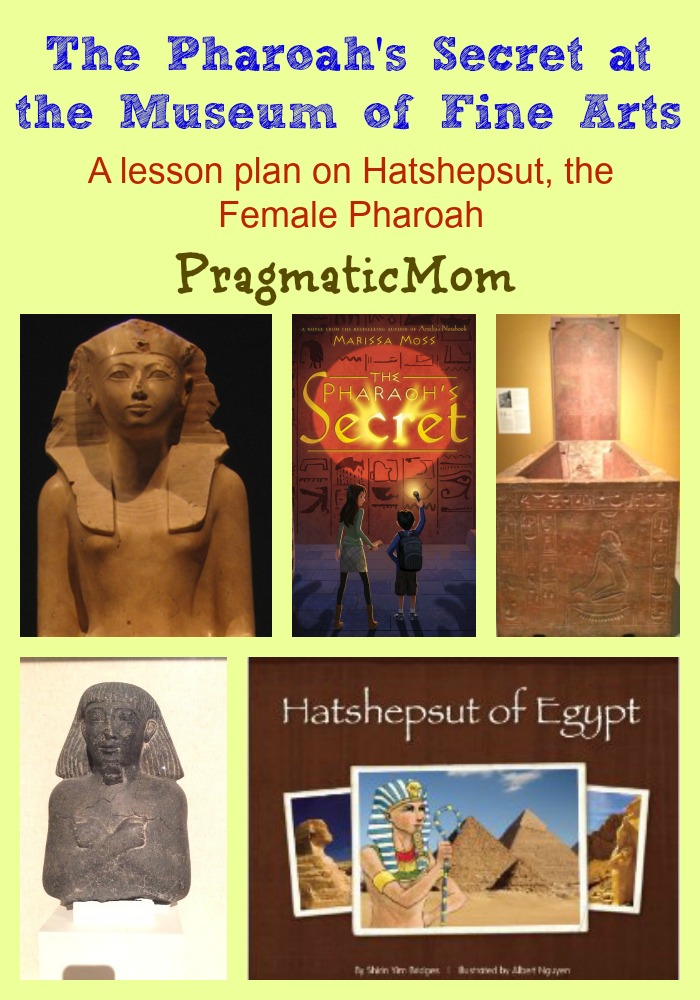 When I read an action adventure fantasy that has time travel, it’s easy to believe that it’s just a made up story. Sure, Hatshepsut is a real person but she’s from so long ago that she seems like a mythical person. Until I ran into her at Boston’s Museum of Fine Arts… And so I have a lesson plan around The Pharoah’s Secret in three parts:

Part I: Learn about Hatshepsut Hatshepsut was given a reign of about twenty-two years by ancient authors, assuming power as early as 1512 BC, or, as late as 1479 BC. Statue of Hatshepsut on display at the Metropolitan Museum of Art

Hatshepsut was one of the most prolific builders in ancient Egypt, commissioning hundreds of construction projects throughout both Upper Egypt and Lower Egypt. Arguably, her buildings were grander and more numerous than those of any of her Middle Kingdom predecessors’. Later pharaohs attempted to claim some of her projects as theirs. She employed the great architect Ineni, who also had worked for her father, her husband, and for the royal steward Senemut. Following the tradition of most pharaohs, Hatshepsut had monuments constructed at the Temple of Karnak. Another project, Karnak’s Red Chapel, or Chapelle Rouge, was intended as a barque shrine and originally, may have stood between her two obelisks. It was lined with carved stones that depicted significant events in Hatshepsut’s life. Following the tradition of many pharaohs, the masterpiece of Hatshepsut’s building projects was a mortuary temple. She built hers in a complex at Deir el-Bahri. It was designed and implemented by Senemut at a site on the West Bank of the Nile River near the entrance to what now is called the Valley of the Kings because of all the pharaohs who later chose to associate their complexes with the grandeur of hers. Sarcophagus of Queen Hatshepsut recut for her father, Thutmose I. At the Deir el-Bahari temple, Hatshepsut’s numerous statues were torn down and in many cases, smashed or disfigured before being buried in a pit. At Karnak, there even was an attempt to wall up her obelisks. While it is clear that much of this rewriting of Hatshepsut’s history occurred only during the close of Thutmose III’s reign, it is not clear why it happened, other than the typical pattern of self-promotion that existed among the pharaohs and their administrators, or perhaps saving money by not building new monuments for the burial of Thutmose III and instead, using the grand structures built by Hatshepsut.

Amenhotep II, the son of Thutmose III, who became a co-regent toward the end of his father’s reign, is suspected by some as being the defacer during the end of the reign of a very old pharaoh. He would have had a motive because his position in the royal lineage was not so strong as to assure his elevation to pharaoh.

Hatshepsut was the fifth pharaoh of the Eighteenth dynasty of Egypt. Hatshepsut came to the throne of Egypt in 1478 BC. Officially, she ruled jointly with Thutmose III who had ascended to the throne as a child one year earlier. She is generally regarded by Egyptologists as one of the most successful pharaohs, reigning longer than any other woman of an indigenous Egyptian dynasty. from Wikipedia

Talibah and her younger brother Adom are linked to an ancient Egyptian mystery: who and why wanted to wipe out Hatshepsut’s legacy? They visit their ancestral homeland in Egypt with their Egyptologist father and find out that their deceased mother had a vital role to play for a long-dead pharaoh. Now Talibah is called upon to complete her mother’s unfinished task tied to the great female pharaoh Hatshepsut and her high priest Senenmut. But what exactly transpired in the 1450’s B.C.? Talibah and her brother must find out in order to solve the mystery that enshrouds them. [chapter book, ages 8 and up]

I found this information below from Wikipedia about Senenmut that readers who have completed The Pharoah’s Secret might want to mull over: Could this be Senenmut?

Senenmut first enters the historical record on a national level as the “Steward of the God’s Wife” (Hatshepsut) and “Steward of the King’s Daughter” (Neferure). Some Egyptologists place Senenmut’s entry into royal service during the reign of Thutmose I, but it is far more likely that it occurred during either the reign of Thutmose II or while Hatshepsut was still regent and not the pharaoh. After Hatshepsut was crowned pharaoh, Senenmut was given more prestigious titles and became the high steward of the king. Senenmut supervised the quarrying, transport, and erection of twin obelisks, at the time the tallest in the world, at the entrance to the temple of Karnak. One still stands today; the other broke in two and toppled centuries ago. Karnak’s Red Chapel, or Chapelle Rouge, was intended as a barque shrine and may have originally stood between the two obelisks.

Some Egyptologists have theorized that Senenmut was Hatshepsut’s lover. Facts that are typically cited to support the theory are that Hatshepsut allowed Senenmut to place his name and an image of himself behind one of the main doors in Djeser-Djeseru.

Although it is not known where he is buried, Senenmut had a chapel and a tomb constructed for him, respectively at (TT71) in the Tombs of the Nobles, and the tomb at (TT353) which contains a famous star ceiling, near the temple at Deir el-Bahri, near Hatshepsut’s mortuary temple. They were both heavily vandalized during the reign of Thutmose III, perhaps during the latter’s campaign to eradicate all trace of Hatshepsut’s memory.

I really like this series depicted real princesses who defied custom and forged a path of their own. I also like how the illustrations combine both art and artifact to capture the princesses’ life. [picture book, ages 6 and up]

Here’s a great book about pyramids!

David Macaulay takes us back in time to show us step by step how the great pyramid gets constructed as well as who is involved. With detailed illustrations, this book captures the magnificence and enormity of building a pyramid fit for a pharaoh. Interestingly, the architect depicted, Mahnud Hotep, is also the pharaoh’s best friend. [advanced nonfiction picture book, ages 9 and up]

Here’s a great book about Tutankhamen

The Secrets of Tutankhamun: Egypt’s Boy King and His Incredible Tomb by Patricia Cleveland-Peck, illustrated by Isabel Greenberg

“This large-format picture book is more reminiscent of Motel of the Mysteries in its vocabulary, content and writing style. It is part biography of Tutankhamun, with excellent information about the background of the Egyptian royal family at the time and explanations of how succession and intermarriages played into the political climate. There is a chapter about the process of mummification that would be very helpful to have at hand while reading the first chapter of Rubalcaba’s The Wadget Eye that includes information about funeral processions and tombs as well. The last part of the book gives detailed information about Carter’s dig that is almost as complete as Schlitz’s The Hero Schliemann. I especially liked that the various incidences  of people affected by the “curse” of the tomb are discussed, but the author acknowledges that there were many more people involved with the dig who suffered no ill-effects.” [nonfiction chapter book, ages 8 and up]

How about you? I’m fascinated with The Queen Who Was King. Are there any great books about Hatshepsut that you recommend? Please share! Thank you!