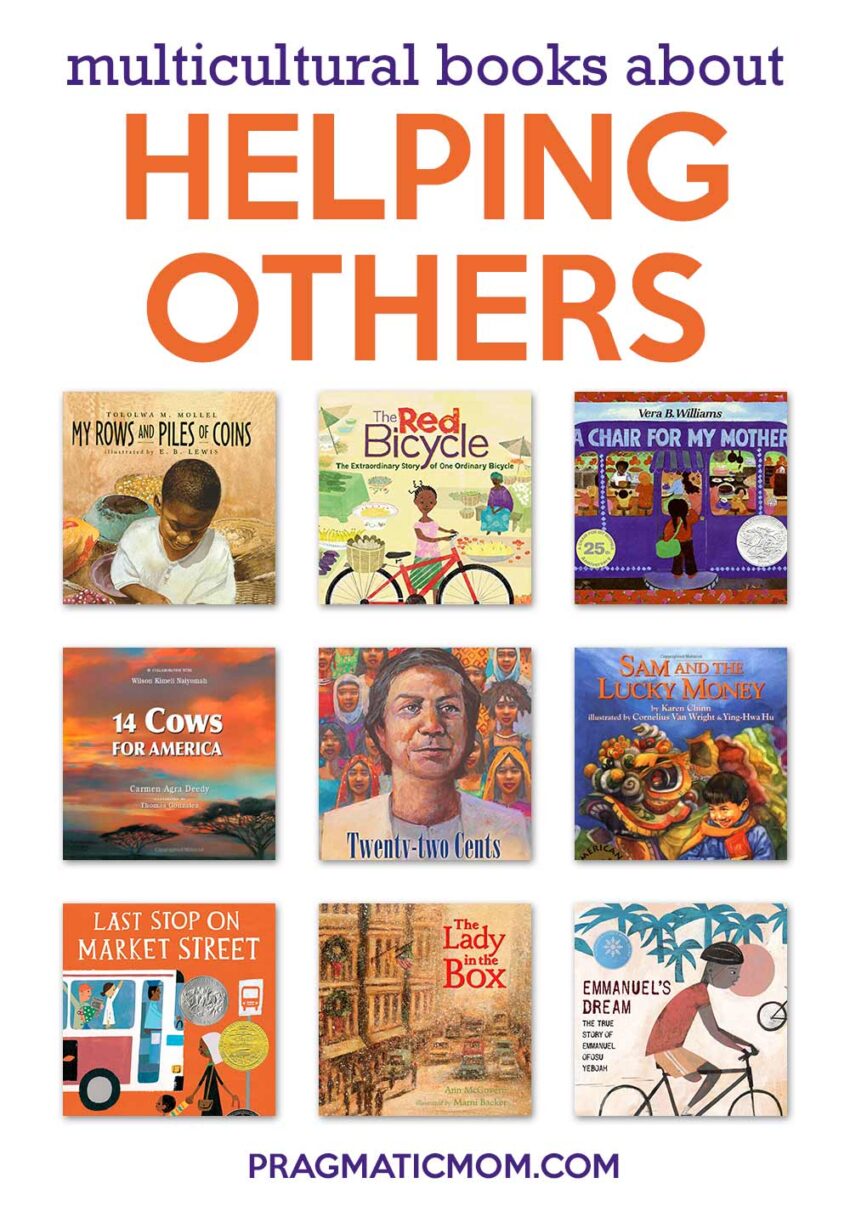 I think kids are naturally compassionate and it only takes a single story or book to motivate them to help out in someway. But can a child truly make a difference? I’m hoping these books will help demonstrate that, like a ripple effect, a small act of kindness, can make a big difference.

I didn’t set out to find books centered around bicycles but there are a few here that demonstrate how such a simple means of transportation can change lives. In fact, it’s this idea of how small things (and single ideas) can change lives that inspired this list.

What books for kids inspire you and your kids to change the world? Please share!

10. My Rows and Piles of Coins by Tololwa M. Mollel, illustrated by E. B. Lewis*

In Tanzania, Saruni helps his mother with market work, pushing a squeaky old wheelbarrow loaded with goods. His mother gives him an allowance for helping but he isn’t tempted by toys or sweets at the marketplace. He’s saving his coins to buy something truly special. Over the weeks selling produce, firewood, and eggs, Saruni’s savings grows into more piles and rows of coins. His goal: to buy a bicycle to help his mother on market day. When he goes to buy a bike, he’s disappointed to learn he doesn’t have nearly enough money but his mother is touched by his generous gesture. When his father gets a motorbike, Saruni is able to buy his father’s old bike in exchange for his savings. Now, he can load his bicycle with goods to help his mother take them to market. As he returns from the market, he thinks … “If only I had a cart to pull behind my bicycle … I could lighten [my mother’s load]. And his savings goal starts anew! [picture book, ages 4 and up]

9. The Red Bicycle: The Extraordinary Story of One Ordinary Bicycle by Jude Isabella, illustrated by Simone Shin

Leo in America has worked hard to earn a bicycle which he names Big Red. Now that he’s grown, his bike is too small for him and he decides to donate it to a country that really needs it. Big Red ends up in Ghana where a young girl, Alisetta, uses it to help her family protect their sorghum crop from the birds and carry items to market in the bike’s basket. When Big Red’s spokes break from a runaway pig, she donates it to a local medical clinic where it’s turned into an ambulance bike. The red bike from America has made life much easier across the world. For readers who are inspired to donate their old bikes, there are resources listed in the back:

A recycled bike can change a person’s life! [picture book, ages 8 and up]

8. A Chair for My Mother by Vera Williams

There was a big fire at their old house, and all the furniture was destroyed. Now, the three of them — grandmother, mother, and daughter — are saving their coins in a gigantic jar to buy a big comfy chair. The jar is finally full and now it’s time to find the perfect chair for mom to put her feet up after a long day working at the diner. And they find the perfect one! [picture book, ages 4 and up]

Can one person with a single idea help millions fight their way out of poverty? This is the point I wanted my kids to mull over. Muhammad Yunus is one such person. His idea is a very small loan with a low-interest rate and not requiring collateral, inspired by a single mom who made bamboo stools.

He learned that she had to borrow the equivalent of 15p to buy raw bamboo for each stool made. After repaying the middleman, sometimes at rates as high as 10% a week, she was left with a penny profit margin. Had she been able to borrow at more advantageous rates, she would have been able to amass an economic cushion and raise herself above subsistence level.

In Bangladesh today, Muhammad Yunus’ microloan bank, Grameen, serves 8.29 million borrowers in 81,367 villages. Of the borrowers, 97% are women and over 97% of the loans are paid back, a recovery rate higher than any other banking system. [picture book, ages 3 and up]

5. Sam and the Lucky Money by Karen Chinn, illustrated by Cornelius Van Wright and Ying-Hwa Hu

It’s Chinese New Year and Sam has a pocketful of small red envelopes called leisees filled with lucky money that he’s allowed to spend any way he wants instead of a notebook or socks as usual. Four dollars is a lot of money for Sam but not enough for the basketball he wants. As Sam navigates the crowds, he accidentally kicks a barefoot homeless man sitting in the street. The man’s image haunts Sam’s thoughts as he shops with his mom. When he runs into the man again, Sam makes a big decision: his four dollars is not enough for shoes, but it would buy a pair of socks for him and he gifts his lucky money to him. [picture book, ages 4 and up]

*Matt de la Pena has been accused of sexual misconduct.

When CJ is with his nana, she always manages to find something positive, even magical, in everything around them. The bus breathes fire and the trees drink the rain through straws in her eyes. The last stop on the bus route is Market Street and that’s their final destination. Even in this urban blight, nana helps CJ find the beauty in a rainbow arcing over their soup kitchen when they spend the rest of the day helping out. [picture book, ages 3 and up]

3. The Lady in the Box by Ann McGovern, illustrated by Marnie Backer

Lizzie and  Ben noticed that the grate at the Circle Deli was home to a homeless woman who slept in a cardboard box there at night. The warm air from the grate kept her from freezing. Lizzie and Ben started to bring her food and other small gifts to help her out. One day, the owner of the Circle Deli complained and made her move. This new spot did not have a grate and the lady’s lips turned blue from the cold. It was time to involve Mama who made it her mission to let the woman return to her grate. Mama took Lizzie and Ben to a soup kitchen to help out where they saw their homeless friend again. Ben gives her a good luck key chain hoping that one day she’ll have a place of her own to stay. [picture book, ages 4 and up]

This is the true story of Emmanuel Ofosu Yeboah, who was born disabled in Ghana. Despite having only one leg, his mother encouraged him to reach for his dreams and made sure that he got an education even though he had to hop to school two miles each way. He learned how to play soccer and to ride a bicycle and eventually rode a bicycle across his entire country with just one leg becoming a hero for his people. He continues to work on behalf of the disabled for his country. [picture book, ages 4 and up]

1. A Symphony of Whales by Steve Schuch, illustrated by Peter Sylvada

In Siberia during the winter of  1984-1985, thousands of whales were trapped by ice in a narrow inlet. Glashka and her people of the Siberian Chukchi Peninsula want to help the whales. A Russian icebreaker helps out by clearing for the whales to return to open water but the whales are not following the icebreaker. Glashka (a fictional girl in the book) who hears whale music in her head, has the boat play classical music after folk music and rock and roll fail. Accompanying the music with their own voices, the whales finally follow the boat out to safety. This is a true story! [picture book, ages 4 and up] 10 thoughts on “10 Amazing Multicultural Picture Books About Helping Others”