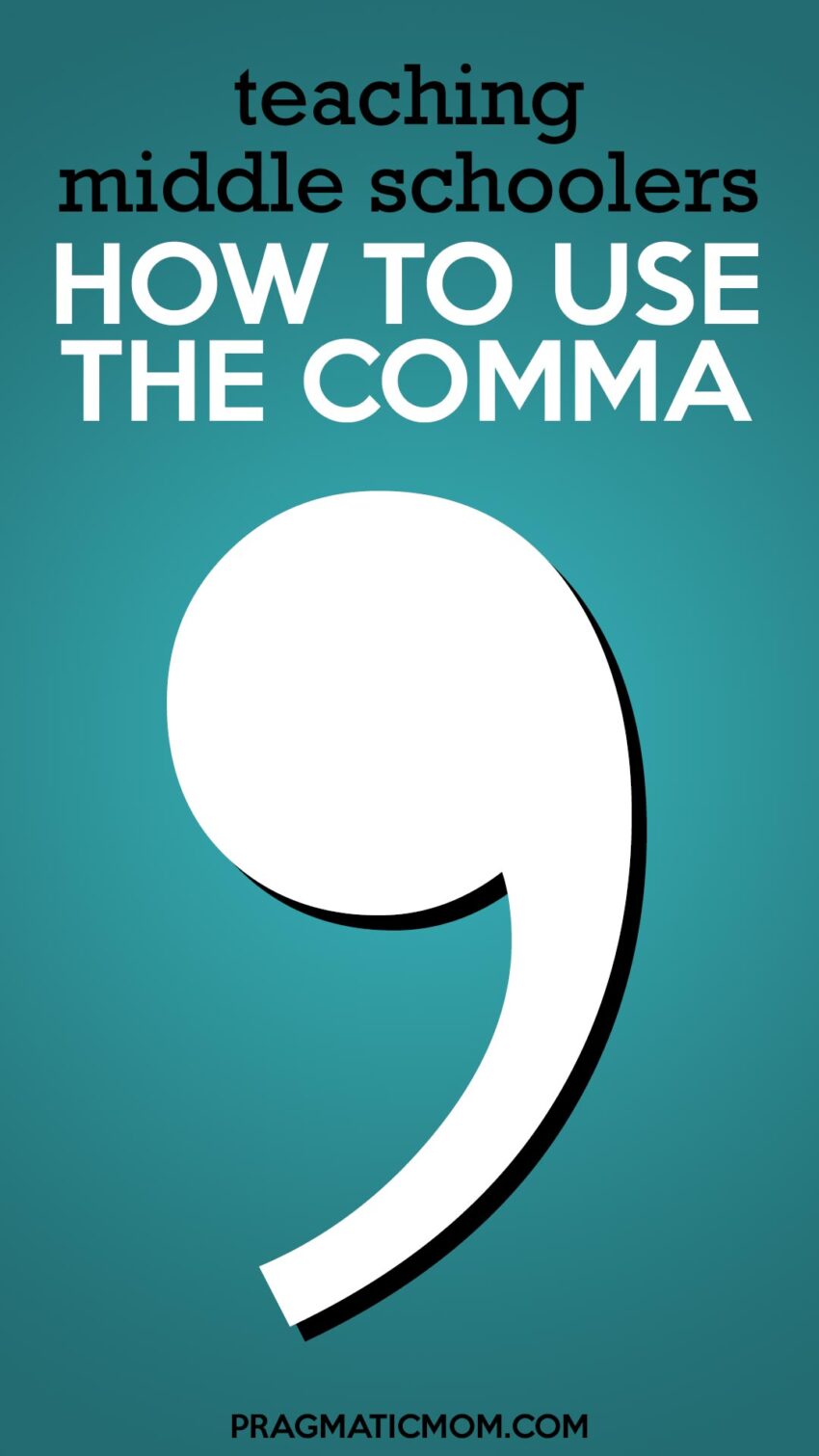 PickyKidPix asked me to help her edit her English assignment last night. She said that she’s having trouble with sentence fluency which is bringing her grade down. I wasn’t sure what “sentence fluency” means but after reading her essay and helping her fix it, I’ve decided that I need to do a four part series to help her, and hopefully other kids too on:

Let’s get started on how to use the comma. I noticed that PickyKidPix’s first issue is that she just doesn’t the comma enough. I asked her if she reads her essay out loud to figure out pauses and she said that she did, but because she reads really fast, the lack of pauses sounds fine to her; hence she omits the necessary commas separating the descriptive phrases from the main sentence. That’s not good! I’m pulling examples of where my daughter gets confused from Business Insider: 13 Rules for Using Commas Without Looking Like an Idiot.

Step 1: Identify the subject and predicate of the main sentence.

Circle it or highlight it and then see what is leftover. Do you have two sentences? How are they connected? Chances are you:

Use a comma before any coordinating conjunction (and, but, for, or, nor, so, yet) that links two independent clauses.

Example: “I went running, and I saw a duck.”

You may need to learn a few grammatical terms to understand this one.

An independent clause is a unit of grammatical organization that includes both a subject and verb and can stand on its own as a sentence. In the previous example, “I went running” and “I saw a duck” are both independent clauses, and “and” is the coordinating conjunction that connects them. Consequently, we insert a comma.

If we were to eliminate the second “I” from that example, the second clause would lack a subject, making it not a clause at all. In that case, it would no longer need a comma: “I went running and saw a duck.”

My daughter is having problems with a descriptive clause running into her sentence without the separation of a comma. Having her identify the subject and predicate of the sentence will help flush out these buggers.

Use a comma after a dependent clause that starts a sentence.

Example: “When I went running, I saw a duck.”

A dependent clause is a grammatical unit that contains both subject and verb but cannot stand on its own, like “When I went running …”

And again, finding the main sentence will help her with adverbs that introduce her sentences.

Use a comma after introductory adverbs.

“Unsurprisingly, I saw a duck when I went running.”

Many adverbs end in “ly” and answer the question “how?” How did someone do something? How did something happen? Adverbs that don’t end in “ly,” such as “when” or “while,” usually introduce a dependent clause, which rule number two in this post already covered.

Also insert a comma when “however” starts a sentence, too. Phrases like “on the other hand” and “furthermore” also fall into this category.

Starting a sentence with “however,” however, is discouraged by many careful writers. A better method would be to use “however” within a sentence after the phrase you want to negate, as in the previous sentence.

She also needs to take a second pass at her essay to look specifically for particular things like a shift in a sentence that makes a comparison. She also has to be mindful of a series of items because she will often miss the last comma in the series. Finally, when she uses multiple adjectives in a row, they need separation with commas.

This editing pass isn’t difficult but requires close reading and attention to detail. She needs to read specifically to find these patterns in her sentences and double-check that she’s following the rules. She can look up the rules but it would be helpful to memorize them.

Use a comma to offset negation in a sentence.

For example: “I saw a duck, not a baby seal, when I went running.”

In this case, you still need the comma if the negation occurs at the end of the sentence. “I saw a baby seal, not a duck.”

Also use commas when any distinct shift occurs in the sentence or thought process. “The cloud looked like an animal, perhaps a baby seal.”

Use commas to separate items in a series.

For example, “I saw a duck, a magician, and a liquor store when I went running.”

That last comma, known as the serial comma, Oxford comma, or Harvard comma, causes serious controversy. Although many consider it unnecessary, others, including Business Insider, insist on its use to reduce ambiguity.

Use a comma between two adjectives that modify the same noun.

For example: “I saw the big, mean duck when I went running.”

Since “I saw the mean, big duck ” and “I saw the big and mean duck” both sound fine, you need the comma.

Sentences with non-coordinate adjectives, however, don’t require a comma. For example, “I lay under the powerful summer sun.” “Powerful” describes “summer sun” as a whole phrase. This often occurs with adjunct nouns, a phrase where a noun acts as an adjective describing another noun — like “chicken soup” or “dance club.”

How do you get a busy middle school kid to practice grammatical rules when it’s not a school assignment. I will try two tacts:

EZ Comma is free and will drill the comma rules we reviewed above. Here’s a video on commas for those who like to learn via screens. This is from Ted-Ed on the Oxford Comma and shows the confusion around the use of the comma! A grammatical rule that is optional? Or confusing?

The Ghouls’ Guide to Good Grammar by Leslie Kimmelman, illustrated by Mary Sullivan

Commas are tricky. They have many jobs. Just like periods, they can tell you when to pause, but they come in the middle of a sentence, not at the end.

Learning grammar has never been so fun! The Ghouls introduce young readers to the basics of punctuation including how to use the comma. [picture book, ages 4 and up] Writing Revision Tips for Kids: Why Writing is All About Revising

Activities and Learning Resources for #KidLitQuarantine

Getting Kids Involved with Creative Writing

Get Kids Writing with a Progressive Story

Writing Tips for Kids Who Write for School Newspapers

6 thoughts on “Middle School Writing: How to Use the COMMA”