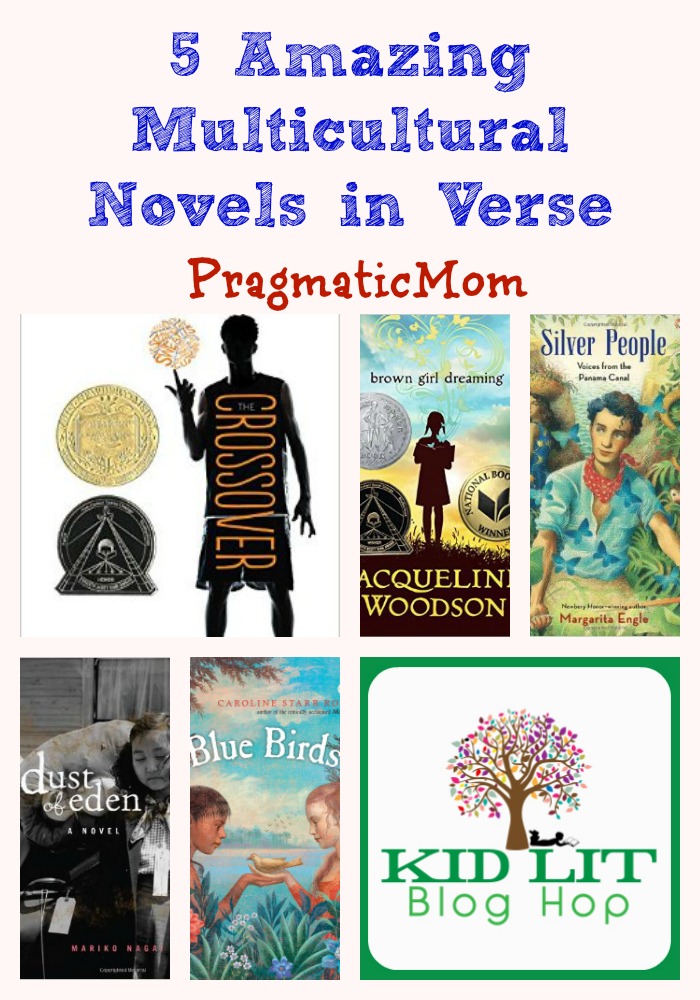 It’s been such a great year for those who love both multicultural/diversity/inclusive books for kids AND novels in verse! I picked five amazing favorites that I’ve loved from this past year and hope that the popularity of these books will encourage more diversity books to be published!

What are your favorite novels in verse? Please share! Thanks!

The New York Times article by Veronica Chambers picked up on the nuances of a publishing and marketing conundrum: is it the cart or the horse? Who is defining the book audience too narrowly?

I will say first that the title seems to confine the book in too narrow a box. I wondered if the author and publishers, by calling the book “Brown Girl Dreaming,” were limiting its audience or, at the very least, the audience of girls who would pick it up right away.

But I worry that such a specific title might lead a reader — especially a teenage reader — to miss what a big tent Woodson is pitching. Will girls who aren’t brown know, without prompting, that they too are invited to this party?

Thankfully, the National Book Award, and a Newbery Honor Award have put Brown Girl Dreaming where it belongs: front and center. And for all different kinds of readers: boys, girls, browns, yellows, whites and all other colors of the rainbow.

I will confess that although I noticed that every Mock Newbery list seemed to include The Crossover, I avoided reading it, not wanting to put myself through the traumatic story of a single mother, inner city drug war zone, and a boy struggling to escape this harsh environment through the medium of basketball. I couldn’t have been more wrong about the plot!

I’m aware, now, of my own biases that I bring to the table, but also of the lack of books for kids that portray middle two-parent, middle class African-American families. Josh and Jordan are twins, each equally talented on the basketball court. This is not surprising since their father was a European basketball star with a legendary crossover move. But middle school brings that great divide of those obsessed with girls and those who just don’t care about that. And it’s this struggle between basketball and girls that threatens to tear everything apart.

I’m thankful that the 2015 Newbery Award for The Crossover puts this coming-of-age middle school story on the top of everyone’s reading pile.

A historical novel in verse can also be a riveting pageturner as it seeks out to figure out the mystery of what happened to the colonists who came to Roanoke Island in the late 16th century. Caroline Starr Rose’s gift is that not only is her novel in verse plausible as to the final outcome of the 115 men, women and children attempting to start a new life in Virginia but her story makes you see the conflict from both points of view: that of the American Natives who live there and that of the English colonists.

At the conclusion of the book, despite being a most satisfying read, I found it impossible not to want to know more, including wanting to visit Roanoke firsthand. I’m hoping to bring the family there soon!

Perhaps only Margarita Engle could tell us this story, that of costs to the rain forest and human lives sacrificed, because of her background as a botanist. Her novel in verse also brings to light the relatively unknown Apartheid-like system enforced for those working to build the canal: the darker the skin, the less you made.

The costs of building the Panama Canal engineering marvel are subtly presented in this novel-in-verse and will likely cause the reader a little anxiety in thinking about this new, big expansion. And so it should!

Dust of Eden by Mariko Nagai

I’ve read many picture books at the Japanese American internment (my mother was one such person forced to relocate during WWII) but Nagai’s novel in verse is the first to really make me feel and understand the racism that my mother, who was born in San Francisco’s Japantown, faced. (And it makes my blood boil.) … I would change my hair color into a honey

blond that changes into lighter

shades of almost white during the summer,

my name, if I could change my parents,

I could change my life. I would be an American.

But I already am.

Nagai’s haunting novel in verse chronicles the Mina Tagawa’s family after the Japanese bomb Pearl Harbor. Her father is held in prison without charges, her grandfather suffers in stoic silence, her older brother’s anger and her mom’s graceful pride not to let racism destroy them. They are forced from Seattle to Camp Harmony and then to Minidonka Relocation Center in Idaho, losing three years of their lives and much, much more. These Japanese Americans lost everything: their bank accounts were frozen, their homes and businesses and all that they owned save for two bags they were allowed to take. Like Mina’s brother Nick in this book, my mother’s brother also joined the 442nd regiment composed almost entirely of Japanese Americans. The 442nd Regiment was the most decorated unit for its size and length of service in the history of American warfare.

In 1988 when most internees were dead, the U.S. Government paid reparations to the surviving internees. My mother used hers to buy a Lexus which she drove until she could no longer operate a car.

You may not have heard of civil rights hero, Fred T. Korematsu.

In 1942, at the age of 23, he refused to go to the government’s incarceration camps for Japanese Americans. After he was arrested and convicted of defying the government’s order, he appealed his case all the way to the Supreme Court. In 1944, the Supreme Court ruled against him, arguing that the incarceration was justified due to military necessity.

In 1983, Prof. Peter Irons, a legal historian, together with researcher Aiko Herzig-Yoshinaga, discovered key documents that government intelligence agencies had hidden from the Supreme Court in 1944. The documents consistently showed that Japanese Americans had committed no acts of treason to justify mass incarceration.

With this new evidence, a pro-bono legal team that included the Asian Law Caucus re-opened Korematsu’s 40-year-old case on the basis of government misconduct. On November 10, 1983, Korematsu’s conviction was overturned in a federal court in San Francisco. It was a pivotal moment in civil rights history. From Korematsu Institute

Dust of Eden forces us to remember what happened and one hopes it will not happen again to anyone, but that’s only if we truly learn from our mistakes. Welcome to the 58th Kid Lit Blog Hop where we continue to develop a dynamic and engaged community of children’s books bloggers, authors, publishers, and publicists. So, you are always more than welcome to join us by popping in a post and hopping around to meet some of your fellow Kid Lit bloggers and authors!

This week, we are excited to be including a Twitter Linky Party to be held in conjunction with the Kid Lit Blog Hop. These linky parties are designed to give you the opportunity to connect with and grow your network of fellow kid lit bloggers, authors, and parents through your various social media platforms.

2. KID LIT BLOG HOP: Link up any Kid Lit related post in the Kid Lit Blog Hop. This can be a link to a children’s book review, a discussion about children’s literature/literacy, or a post on a recently-read children’s book or one that you love from your childhood.

3. KID LIT BLOG HOP: Please visit AT LEAST the TWO LINKS from the Kid Lit Blog Hop directly ahead of your own and leave them some love in the form of a comment. We are trying to build a community of bloggers, readers, parents, authors, and others who are as passionate about children’s literature as we are so please CONNECT and follow any or all of the blogs that interest you!