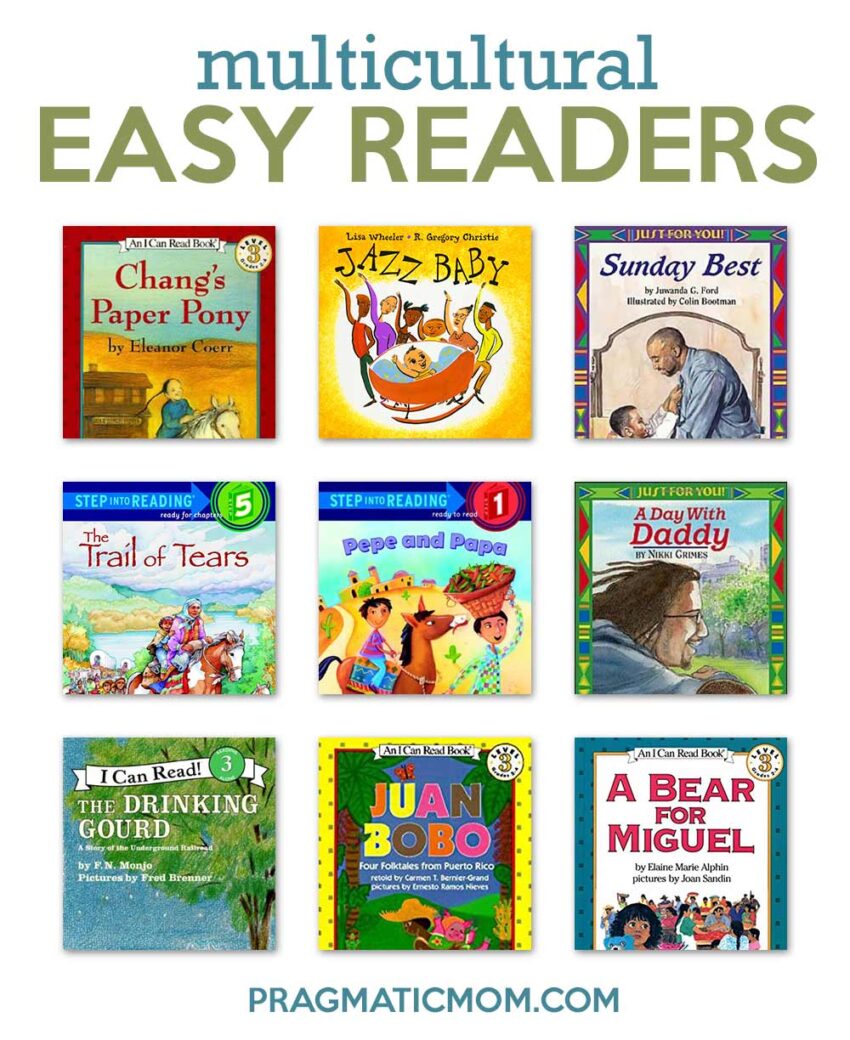 It wasn’t easy finding great multicultural easy readers! My town library has about 49 cubic feet of easy readers — an entire wall — but about half have animal characters and most of the remaining books do NOT have characters of color. From my search that day, I’d say that about 2% of the square footage were multicultural books. I culled through all of these plus ran through the Geisel award-winning books and came up with my ten favorites.

Some of favorite Easy Readers include Little Bear, Mr. Putter and Tabby, Henry and Mudge, anything by Arnold Lobel, Fly Guy, Elephant and Piggie, Biscuit, and Dr. Seuss, but sadly, none of these books have diversity characters. I can understand that the animal-based Easy Readers can not, but Mr. Putty could have a friend who isn’t white, right?! And Henry with his big dog Mudge could too. It doesn’t have to be a big deal; the friend just happens to be of color (and sometimes I prefer it that way). So just a thought to plant out there…let’s hope in 2016, Henry and Mr. Putter make new friends of color.

Chang and his grandfather immigrated from China to work in the kitchen of a mining camp during the Gold Rush in California where many of the miners treated him unkindly. Chang dreams of owning a pony; his first real friend. Chang has an actual friend too. Big Pete is the tallest, strongest miner Chang has met, but also one of the kindest. He teaches Chang how to pan for gold in exchange for cleaning services. While sweeping Big Pete’s floor, Chang finds gold under the floorboards. He wants to use it to buy his pony but his grandfather makes him do the right thing. Big Pete takes the gold to a bank in Sacramento and returns with a big surprise for Chang. [easy reader for those who can read 20 to 30 words on a page]

I would consider Jazz Baby a picture book rather than an easy reader, but it won a 2008 Geisel Honor award which honors authors and illustrators for the most distinguished American book for beginning readers.  The Geisel list is another great list to find books for kids just starting to read independently and so I wanted to include it, particularly since so few Geisel books have diversity themes or characters.

Like Charlie Parker Played Be Bop (another favorite of mine), Jazz Baby crackles with energy and swings with rhythm! I especially like how a multi-generational African-American family is represented in various shades of brown. It’s a perfect bedtime story that starts off with a finger-snapping beat but winds down into sleep time. [picture book]

A week in the life of an African-American family highlights Sunday; the day when they do everything “the best.” It starts with a really great breakfast, followed by coat and ties for father and son and pretty dresses for mother and daughter.  A leisurely stroll comes next with time to enjoy the flowers and greet friends. Church service is next, and then family time, sometimes with relatives and sometimes not. Sunday Best is all about the importance of family in this story about everyday life for a middle-class African-American family. [easy reader for those who can read 20 to 30 words on a page]

7. The Trail of Tears by Joseph Bruchac

17,000 men, women, and children of the Cherokee nation were forced to walk west in 1838 with inadequate provisions including food and blankets.  What we know as Georgia, Alabama, Tennessee, Kentucky, South Carolina, and North Carolina were once all Cherokee land. For over 100 years, the Cherokee lived peacefully with white settlers but after the American Revolution, their lands were taken away bit by bit. Andrew Jackson sponsored the Indian Removal Laws which, among other things, made it illegal for Cherokees to dig for gold on their own land. Their homes and lands were given away to white settlers in a lottery, including their leader, John Ross. Finally, Andrew Jackson succeeded by a single vote to make The Treaty of New Echota a law, forcing the removal of the Cherokees from their lands. The Trail of Tears should be taught in every school about a shameful part of American history when greed, racism, and broken promises prevailed. Today two Cherokee nations survive in Oklahoma and North Carolina. Their survival is a lesson of hope, courage, and determination against all that is wrong. [easy reader for those who can read 40 to 80 words on a page]

6. Pepe and Papa by Linda Hayward, illustrated by Laura Huliska-Beith

Easy Readers run the gamut from very simple stories for those just learning to read, to texts to transition children to chapter books. Pepe and Papa fall in the easiest of Easy Readers and therefore uses just three or four simple words on most pages. And yet, with a minimum of words, this Easy Reader conveys a funny adventure of a boy and his father trying to travel to market with their burro but not quite getting it right according to others. [easy reader for those who can read 3 to 4 words on a page]

5. A Day with Daddy by Nikki Grimes, illustrated by Nicole Tadgell

It’s a weekend, and today daddy has custody of his son. They spend a wonderful day together at the park, eat lunch at a restaurant and go to the movies for a ninja adventure. When the day ends and the little boy returns to his mother, he misses his father but knows he will see him soon and do this all over again. [easy reader for those who can read 15 to 25 words on a page]

It’s 1851 and slaves in the United States have to escape to Canada to be free. Young Tommy Fuller, the son of a minister, doesn’t know much about runaways. He’s too busy pulling pranks in church by dangling an apple core out of the window to “catch” geese. It’s in his barn that he makes a startling discovery; a family of slaves hidden in the hayloft by his father, who is part of the Underground Railroad. He helps his father hitch the wagon to get them to their next stop but while his father is gone locating a boat to get them across the river, U.S. marshals intervene. Tommy thinks fast and tells them he’s the runaway, afraid of a licking after his church prank. His quick wits save the family hidden in the hay wagon. Tommy hopes that they make it all the way to Canada by following the constellation in the sky, the Drinking Gourd to some, and The Big Dipper to others.

This Easy Reader sets up a young reader for Common Core Civil Rights and U.S. Slavery curriculum in 4th and 5th grade but it’s also just a great story making the past come alive. It’s doubly exciting for us; many homes in our neighborhood were stops in the Underground Railroad including our local Historical Society museum. [easy reader for those who can read 20 to 30 words on a page]

These four classic folk tales feature a young boy called Juan Bobo who reminds me of Big Anthony of Strega Nona fame. While Juan Bobo is kind of a “noodlehead”, these folk stories authentically illustrate what life was like in poor rural areas of Puerto Rico at the beginning of the twentieth century but his antics are also hilariously funny and sure to make a young reader laugh out loud. [easy reader for those who can read 20 to 30 words on a page]

2. A Bear for Miguel by Elaine Marie Alphin, illustrated by Joan Sandlin

How do you explain civil war to a young child so that it’s meaningful but not too scary? Elaine Marie Alphin manages to pull this off in an Easy Reader format, no less! The author introduces us to María and her family who live in El Salvador during the Civil War. For a non-political family, life is tough. María’s father can’t take a government job for fear of guerrilla attacks, but he can’t work for the people who help the guerrillas or the government will arrest him. No work for her father means her family must trade for the groceries and necessities of life they need.

María accompanies him on a trip to the market to help him to barter and ends up making a deal of her own. A young couple is desperate for María’s stuffed bear for their young son who was injured by soldiers and now can’t run and play. For the butter, milk, and cheese that her family needs, Maria decides to give up Paco the Bear, but she’s happy with her decision when she thinks of that boy who can’t run, lighting up when he sees the bear. [easy reader for those who can read 20 to 30 words on a page]

1. Ling and Ting: Not Exactly the Same by Grace Lin

Grace Lin’s first Easy Reader won a Geisel honor award and I’m so thrilled that Ling and Ting are a (much needed) series. Two identical twins are not the same at all! One is careful and tidy; the other is impetuous and squirmy. Their differences are noticeable during a trip to the barber when they end up with very different hairstyles. There are other gentle adventures as well including magic tricks, making dumplings, and a trip to the library. [easy reader for those who can read 20 to 30 words on a page]

Padma is excited for the neighborhood block party but embarrassed by their offering. Lentil Curry soup doesn’t seem like the right kind of food for a block party, so Padma tries to hide it. Will her friends like her mom’s lentil soup from India? [easy reader, ages 5 and up]

Top 10 Multicultural Board Books for Kids