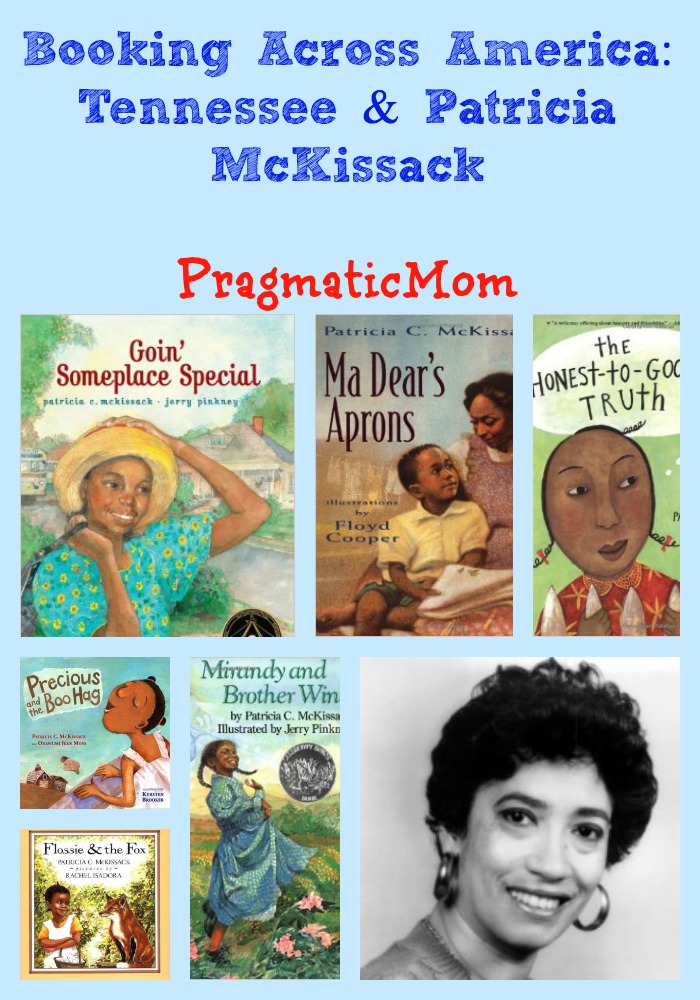 I am thrilled to be co-posting with Valarie Budayr of Jump Into A Book for the Book Across America blog tour.  I was late to the sign up to my birth state of California was already taken, as well as Massachusetts where I now reside. No matter. Tennessee was open where Valarie lives so I grabbed it for us.

We chose Patricia McKissack as our children’s author to represent Tennessee. Not only was she born there, but she’s very active doing school visits and book talks all over the state. You might not have heard of her … so we’ve included a list of her books as well as a book extension idea. Patricia McKissack was born in Smyrna, Tennessee in 1944 and is well known for her Dear America books that cover three different stories of enslavement: A Picture of Freedom: The Diary of Clotee, a Slave Girl; Color Me Dark: The Diary of Nellie Lee Love, The Great Migration North, and Look to the Hills: The Diary of Lozette Moreau, a French Slave Girl.

She has also written a novel for The Royal Diaries series: Nzingha: Warrior Queen of Matamba.

Her picture books also reflect her interest in exploring diversity topics that reflect her birth state: slavery, racism during Jim Crow south and full circle back to Africa during and before the time of slavers.

For Booking Across America, we chose Goin’ Someplace Special and we have an activity below based on this picture book.

During Jim Crow American, ‘Tricia Ann gets permission to travel by herself to “someplace special.” She takes the bus and has to sit in the colored section way in the back, which can run out of seats quickly. As she crosses the public garden, she accidentally sits on a “For Whites Only” bench. When a celebrity pulled up in front of the fancy hotel ‘Tricia Ann stood in front of, she got swept in with the crowd and wound up in the lobby. The manager throws her out and she runs to the protection of a walled church garden in tears. As she makes her way to “someplace special,” she passes the movie theatre where all but three balcony rows are off-limits to her. Finally, she makes her way to her special place. It’s the public library where all are welcome.

The author’s note tells the reader that in the 1950s, Nashville’s public library board of directors quietly voted to integrate all their facilities. During Jim Crow south, the library was one of the few public places where blacks were treated with some respect.

Patricia C. McKissack notes that “reading is the doorway to freedom” but for ‘Tricia Ann, it’s a stressful journey to get there. [picture book, ages 4 and up] Was your local public library ever segregated? Do you know when it was built and who designed it? Use the internet or ask your local librarian how to find out more about your library. 1. When was your library built?

My local library, Newton Free Library, was originally built August 1868! On July 27, 1989, my library was rebuilt into a 91,000-square-foot main library building at a cost of just over $15 million. 2. Did slavery exist when your library opened?

The Thirteenth Amendment (December 1865) formally outlawed the institution throughout the United States so my library opened a few years after that. It was never segregated; I live in an area that had many Underground Railroad stops and Jim Crow laws did not exist here. 3. Who was the architect of your library? 4. When your library opened, how many books did it have?

My library opened with about 7,000 volumes, composed of previous library associations’ collections, new purchases, as well as private donations. 5. How many books does your library have now?

What Is Given from the Heart by Patricia C. McKissack, illustrated by April Harrison

This is a story of what goes around, comes around. Things are tough for James Otis and his mother after his father passed away. They are barely getting by, but when their church pastor asks everyone to give to a single mother and her daughter who have lost everything in a fire, they reach deep inside and give what they can with love in their hearts. James Otis’ mother takes their only nice thing, a white tablecloth and turns into an apron. James Otis ponders hard and comes up with a gift from his heart for the girl in need. This is a wonderful story about gnerosity, empathy, and kindness. [picture book, ages 4 and up]

McKissack’s latest book is a hilarious tall tale set in the bayou. Hugh Thomas knew that Bayou Clapateaux is a mighty peculiar place where strange things happen but that didn’t deter him from a fishing trip. Three small fish soon turned into a massive catch; about a million or so. The alligators in the bayou objected to the loss of their food source, and the grand-père of them all came to work it out with him. He throws half the fish back. Getting the rest of the fish home turns out to be challenging. And in the end, three small fish is all that he’s left with. That, and a mighty tall tale. [picture book, ages 4 and up]

Ma Dear is short for Mother Dear and this story was inspired by a plain muslin apron that McKissack inherited from her great-grandmother, who was a single parent raising three kids in rural Alabama during the early 1900s by cooking, cleaning and doing laundry for other people. This tribute to her chronicles Ma Dear’s daily routine, marked by different aprons, as she worked long hours but still always made time for her son and for helping others. [picture book, ages 4 and up]

The collage illustrations by Kyrsten Brooker make this book especially delightful. Precious is sick so she has to stay home alone while her family plants corn and she is not to let anyone into the house, particularly Pruella the Boo Hag, a mythical trickster, who tries in many iterations to come inside. [picture book, ages 4 and up]

Ma Dear is back in this Caldecott Honor picture book illustrated by Jerry Pinkney. McKissack’s grandparents win an African-American dance competition known as a CakeWalk. The winning couple is awarded a cake. A recipe for a cake is also included!

Mirandy wants to catch Brother Wind so that she can win the Junior CakeWalk competition and tries all kinds of advice from elders to capture the mythical wind. She finally succeeds but when her friend Ezel is rejected by Olinda as a dance partner for being clumsy, she knows just what to do. [picture book, ages 4 and up]

Flossie and the Fox by Patricia C. McKissack, illustrated by Rachel Isadora

McKissack was born from many, many generations of storytellers, and this story comes from her beloved grandfather who was the most masterful bard of them all! She captures the dialect of the rural South in this Aesop-like folk tale about a clever talking fox and a little girl named Flossie who needs to outsmart the fox in order to save the eggs in her basket. [picture book, ages 4 and up]

Libby Louise gets a lesson in telling the truth after she fibs to her mother about doing her chores. She vows to only tell the unvarnished truth, not realizing she is hurting everyone’s feelings with her observations. Finally, she gets the lesson on honesty: “The truth is often hard to chew. But it is sweetened with love, then it is a little easier to swallow.” Giselle Potter’s wonderful illustrations make the book playful, with a folk art appeal. [picture book, ages 4 and up]

Set in West Africa, a young boy is kidnapped and sold into slavery in America but he’s never forgotten by his family he left behind. [picture book, ages 4 and up]

This 1995 Coretta Scott King Honor Book is a tribute to all those involved in the Negro Baseball Leagues: owners, players, fans and the heroes that emerged. [nonficion chapter book, ages 8 and up]

Come check out the other 49 States of Booking Across the USA with these great bloggers: 6 thoughts on “Booking Across the USA: Tennessee & Patricia McKissack”