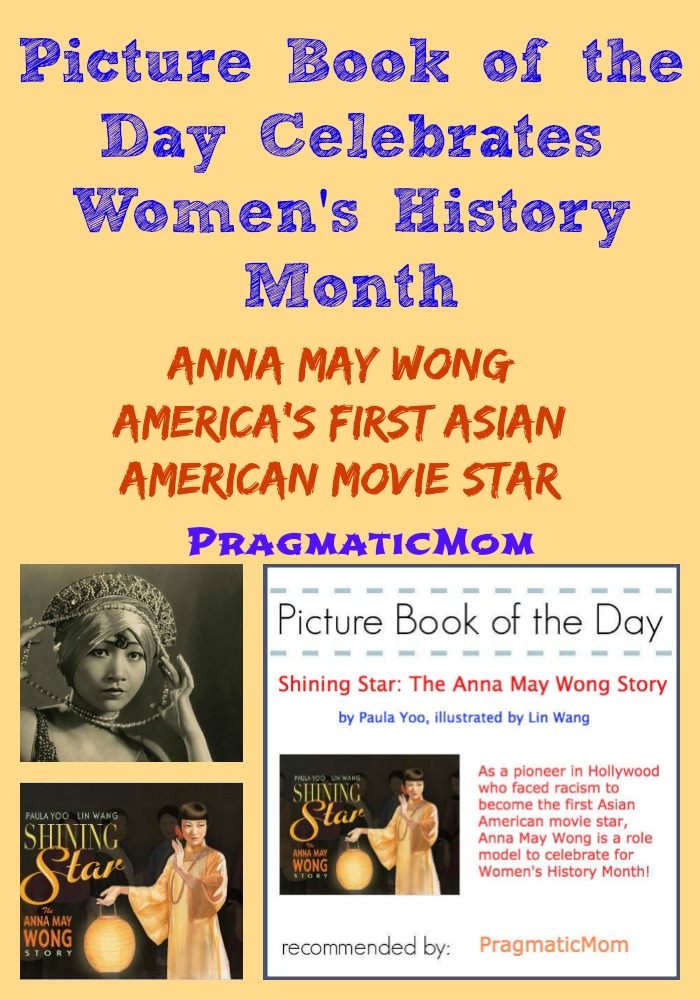 I’m thrilled to be participating in KidLit Celebrates Women’s History Month, run by Margo Tanenbaum, of The Fourth Musketeer, and Lisa Taylor, of Shelf-employed. I met Margo at KidLitCon in 2012. Their great blog celebrates women in history by organizing a month of guest posts about women in history. My post on Anna May Wong was on March 11th. I am also chosing Shining Star: The Anna May Wong Story for Picture Book of the Day today, and I include a short interview with author Paula Yoo. You might remember her for her wonderful post on Best Biographies for Kids.

Picture Book of the Day for Women’s History Month

Anna May Wong was the first Chinese American movie star, and the first Asian American actress to gain international recognition. Despite facing racism in 1920’s Hollywood, her career  was long and varied and included silent and sound film, television, stage and radio.

She rose from humble beginnings growing up in Los Angeles’ Chinatown where her family ran a laundry business. Breaking into Hollywood was especially tough for an Asian American woman, and she took what little roles were offered to her to get started including those that included yellowface and Anti-Asian stereotyping. In 1929, her role as a dancer in Picadilly made her a star in Europe. She vowed never to take roles that demeaned Asians again, even if it meant limited work opportunities.

As a pioneer in Hollywood paving the wave for future generations of Asian Americans in Hollywood, Anna May Wong is a role model to celebrate for Women’s History Month! What modern actress would be most like Anna May Wong today?
Thankfully, I’m having trouble thinking about just one actress to answer your question. Which is good, because it means that there have been MANY Asian American actresses in Hollywood today! Anna May Wong would love that Aisan girl power! 🙂 In terms of Anna May Wong’s talent and determination, my first thought is the fiercely talented veteran actress SANDRA OH whose credits include SIDEWAYS and of course, GREY’S ANATOMY. The beautiful MING NA WEN, whom I first saw in THE JOY LUCK CLUB, is now all over TV especially with her latest role in ABC’s AGENTS OF S.H.I.E.L.D. (Ming Na also played a great role on SyFy’s EUREKA, where I was a writer/producer.) Of course we can’t forget badass LUCY LIU who adds a lot of attitude and fire to her roles, as well. And I think young actress BRENDA SONG (THE SUITE LIFE OF ZACK & CODY and THE SOCIAL NETWORK) could play Anna May Wong in a biopic movie because she has such expressive eyes, just like Anna May Wong. The list goes on and on – there are so many new Asian American actresses on TV and in the movies these days, so I think that’s a good sign!

Anna May Wong encountered yellowface while filing Bits of Life in 1921 and yellowface still exists today. What do you think Anna May Wong would make of this, given it’s nearly 100 years later?
First of all, I think Anna May Wong would be very happy and encouraged by some of the positive progress we’ve made in recent years with images of Asians and Asian Americans in the media. For example, she would love the new show “FRESH OFF THE BOAT” on ABC. She would also be proud about how more Asian American actors are being cast in TV and movie roles that were not Asian-specific but just looking for the best actor to play the part. Plus, there have been positive portrays of Asian and non-Asian interracial romances onscreen as well, something that was forbidden back in her day.

But having said that, I still think she would be disappointed because we have not come as far along as we should have by 2015. It’s been 94 years – almost a century – since Anna May Wong’s movie Bits of Life, and we’re STILL seeing examples of racist, stereotyped images in the media. For example, as much as I love ABC’s “Fresh Off the Boat,” it’s only the second sitcom to feature an Asian American family on TV in the past 21 years.  Twenty-one years. (The first Asian American family sitcom was ABC’s ALL AMERICAN GIRL starring the wonderful Margaret Cho… in 1994.) Let’s do the math – we haven’t come as far along as we should have. So despite the positive progress in some areas of the media, I believe Anna May Wong would be disappointed and impatient with Hollywood today.

What’s next for you?
My latest book is TWENTY-TWO CENTS: MUHAMMAD YUNUS AND THE VILLAGE BANK (illustrated by Jamel Akib, Lee & Low Books 2014). It’s about the Nobel Peace Prize winner Muhammad Yunus and his revolutionary idea of “micro credit” in which he developed a system for the poor to borrow money without high interest rates and thus help them break the cycle of poverty. This book was chosen as a 2014 Junior Library Guild Selection and was also included in the 2015 Notable Books for a Global Society and the CCBC Choices Annual Best Children’s Books of the Year.

In terms of TV writing, I am currently a writer/producer for DEFIANCE on SyFy. Before that, I was a writer/producer for Amazon’s MOZART IN THE JUNGLE. I’m also working on a couple of new book projects for LEE & LOW Books as well as some other novels-in-progress. The writing never stops! 🙂