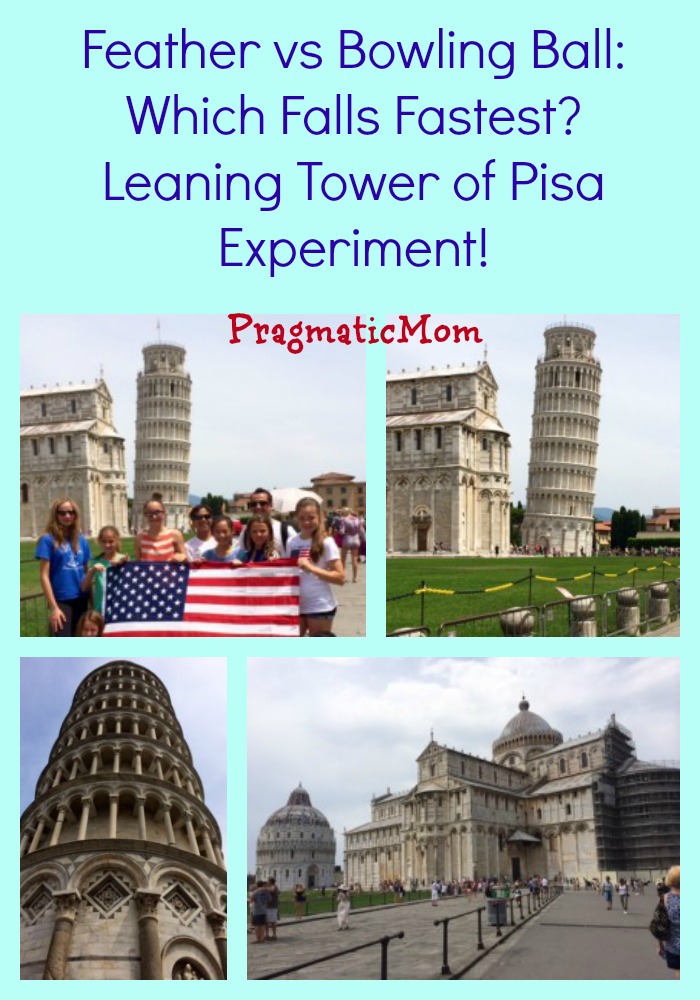 PickyKidPix‘s soccer team played in Italy this past summer and the tour included a stop at Pisa on the Fourth of July. We were warned that Pisa is swarming with petty thieves and that we had to be on high alert. Once we got there though, the square is so beautiful with other buildings besides the leaning tower.

The Leaning Tower of Pisa is the campanile, or freestanding bell tower, of the cathedral of the Italian city of Pisa, known worldwide for its unintended tilt to one side. The tower’s tilt began during construction, caused by an inadequate foundation on ground too soft on one side to properly support the structure’s weight. The tilt increased in the decades before the structure was completed, and gradually increased until the structure was stabilized (and the tilt partially corrected) by efforts in the late 20th and early 21st centuries. From Wikipedia So I thought I would center this post around Galileo’s Leaning Tower of Pisa experiment, but done in the world’s largest vacuum chamber to show that when you remove friction, a feather and a brick will fall at the same rate.

If you drop a brick and a feather at the same time the brick will probably hit the ground first. But this is because of differences in the amount of friction between these objects and the air around them, not because their masses are different. If there were no air…

What happens? How does a hammer, brick, or bowling ball move in comparison to the feathers when you remove any air resistance? Books for Kids to Learn More About Galileo Galilei

In this amazing new book, Peter Sís employs the artist’s lens to give us an extraordinary view of the life of Galileo Galilei. Sís tells his story in language as simple as a fairy tale, in pictures as rich and tightly woven as a tapestry, and in Galileo’s own words, written more than 350 years ago and still resonant with truth. [picture book, ages 6 and up]

I, Galileo by Bonnie Christensen

Acclaimed author-illustrator Bonnie Christensen adopts the voice of Galileo and lets him tell his own tale in this outstanding picture book biography. The first person narration gives this book a friendly, personal feel that makes Galileo’s remarkable achievements and ideas completely accessible to young readers. [picture book, ages 8 and up]

When the great scientist and professor Galileo meets a bright farm boy, Massimo, the teacher becomes the student. On an ordinary day, Galileo encounters Massimo dropping food from a bridge to his uncle passing below in his boat. This simple action makes Galileo rethink Aristotle’s teachings. Galileo takes an interest in Massimo’s cleverness, and together, in a series of experiments, the two investigate the science of motion. [chapter book, ages 8 and up] 8 thoughts on “Feather vs Bowling Ball: Which Falls Fastest?”