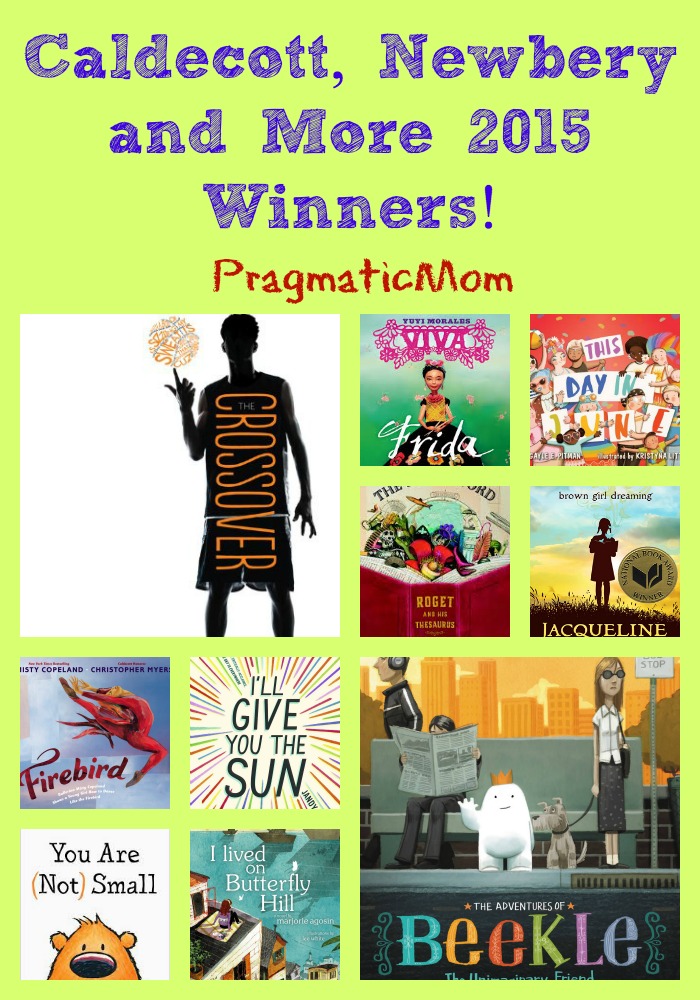 The live webcast is here. Here are the winners and honor books! Of couse, my big question that I have asked goes unanswered is: Why isn’t APALA at the ALA party? Where are the best Asian American books for kids and teens? APALA is an affiliate of the ALA (American Library Association). They are announcing at the same place on the same day. And yet, their award is not included in the ALA event nor on the ALA awards page. It’s feels like a “separate but equal” thing.

The awards will be announced at the 2015 ALA Midwinter Meeting in Chicago (which is were all the rest of the awards are being announced). APALA is an affliate of the ALA.

American Library Association talks a lot about the need for diversity, inclusive and multicultural books for kids and teens but … do they talk the talk but not walk the walk? Why are only Asian American books for kids specifically excluded from this rainbow of diversity? As you can see by the awards below, the ALA awards include specific awards for African American, Latino American, Special Needs, LBGT, but not Asian American. Why is this? I have no idea. You tell me! It’s 2015 … if not now, when?

To recify this situation, I am including the APALA awards in my post.

My picks for Caldecott and Newbery 2015

More 2015 Caldecott Picks and Picture Book of the Day This is what winning the Caldecott looks like! Dan Santat with Lisa Yee.

The Adventures of Beekle: The Unimaginary Friend, written and illustrated by Dan Santat

Nana in the City, written and illustrated by Lauren Castillo

The Noisy Paint Box: The Colors and Sounds of Kandinsky’s Abstract Art by Barb Rosenstock, illustrated by Mary GrandPré

The Right Word: Roget and His Thesaurus by Jen Bryant, illustrated by Melissa Sweet

This One Summer by Mariko Tamaki, illustrated by Jillian Tamaki

[I have to say that I am a little taken aback by the language of the APALA awards in that it seems like they think their award isn’t good enough. It’s not a “goal”; they actually do it: APALA honors and recognizes best books related to Asian/Pacific American experiences or Asian/Pacific American cultures for adults, children and teens.]

I’ll Give You the Sun by Jandy Nelson

And We Stay by Jenny Hubbard

The Carnival at Bray by Jessie Ann Foley

This One Summer by Mariko Tamaki, illustrated by Jillian Tamaki

The Geisel Award is given annually to the author(s) and illustrator(s) of the most distinguished American book for beginning readers published in English in the United States.

You Are (Not) Small by Anna Kang, illustrated by Christopher Weyant

Waiting Is Not Easy! written and illustrated by Mo Willems

I Lived on Butterfly Hill by Marjorie Agosín, illustrated by Lee White

Green Is a Chile Pepper by Roseanne Greenfield Thong, illustrated by John Parra

Separate Is Never Equal, written and illustrated by Duncan Tonatiuh

Mikis and the Donkey by Bibi Dumon Tak, translated by Laura Watkinson

Hidden: A Child’s Story of the Holocaust by Loïc Dauvillier, translated by Alexis Siegel

The Wilder Award honors an author or illustrator whose books, published in the United States, have made, over a period of years, a substantial and lasting contribution to literature for children.

The Scandalous Sisterhood of Prickwillow Place, written by Julie Berry

A Snicker of Magic, written by Natalie Lloyd, narr. by Cassandra Morris

The Robert F. Sibert Informational Book Medal is awarded annually to the author(s) and illustrator(s) of the most distinguished informational book published in the United States in English during the preceding year. The award is named in honor of Robert F. Sibert, the long-time President of Bound to Stay Bound Books, Inc. of Jacksonville, Illinois. ALSC administers the award.

The Right Word: Roget and His Thesaurus by Jen Bryant, illustrated by Melissa Sweet

The Family Romanov: Murder, Rebellion, & the Fall of Imperial Russia by Candace Fleming

How I Discovered Poetry by Marilyn Nelson

How It Went Down by Kekla Magoon

Little Melba and Her Big Trombone by Katheryn Russell-Brown, illustrated by Frank Morrison

When I Was the Greatest by Jason Reynolds

Deborah D. Taylor  is the winner of the Coretta Scott King – Virginia Hamilton Award for Lifetime Achievement. The award is presented in even years to an African American author, illustrator or author/illustrator for a body of his or her published books for children and/or young adults, and who has made a significant and lasting literary contribution.

A Boy and a Jaguar by Alan Rabinowitz

All the Light We Can Not See by Anthony Doerr

Lock In by John Scalzi

Bingo’s Run by James A. Levine

The Martian by Andy Weir

Everything I Never Told You by Celeste Ng

Those Who Wish Me Dead by Michael Koryta

2015 Margaret A. Edwards Award for lifetime achievement in writing for young adults

This Day in June by Gale E. Pitman, Ph.D., illustrated by Kristyna Litten

Beyond Magenta: Transgender Teens Speak Out by Susan Kuklin

I’ll Give You the Sun by Jandy Nelson

Morris Micklewhite and the Tangerine Dress by Christine Baldacchio, illustrated by Isabelle Malenfant

Gabi, a Girl in Pieces by Isabel Quintero

The Strange and Beautiful Sorrows of Ava Lavender by Leslye Walton

The Scar Boys by Len Vlahos

The Story of Owen: Dragon Slayer of Trondheim by E.K. Johnston

The Carnival at Bray by Jessie Ann Foley

The Port Chicago 50: Disaster, Mutiny, and the Fight for Civil Rights by Steve Sheinkin

The Family Romanov: Murder, Rebellion & the Fall of Imperial Russia by Candace Fleming

Laughing at My Nightmare by Shane Burcaw