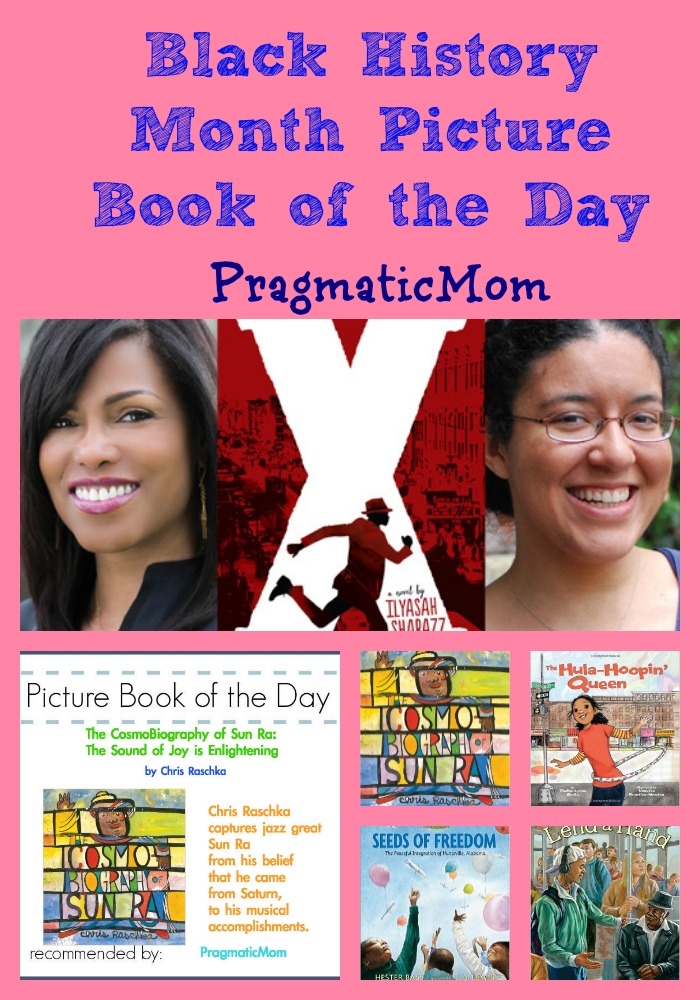 February is Black History Month and I’m celebrating with a round-up of books that I hope teach and inspire for different reasons. I have two biographies on Sun Ra, a jazz legend, and Malcolm X, the great civil rights leader. I chose Lend a Hand for the inspiring poems and inclusive illustrations that urge readers to help make the world a better place. The Hula-Hooping Queen is a picture book story not of a real person but it reminds us that we need stories that denote children of color where it’s not the main plot of the story.

Black History Month, also known as African-American History Month in America, is an annual observance in the United States, Canada, and the United Kingdom for remembrance of important people and events in the history of the African diaspora. From Wikipedia

It’s also my turn for Picture Book of the Day! I chose the picture book of biography of Sun Ra in honor of Black History Month to shine a light on this jazz great in the spirit of remembering important African Americans (who might not be well known). Lend a Hand: Poems About Giving by John Frank, illustrated by London Ladd

The latest research in a Time Magazine article shows that mindfulness including 3 minutes of meditation, acts of kindness and focusing on gratitude can actually increase kids’ math and science scores.

Lend a Hand gently prompts kids to think about compassion and giving back with lovely free-verse poems that are a meditation in itself to read. Illustrated with kids of all colors, I’d use this book as a bedtime story for all ages to inspire kids to do their own acts of kindness. [poetry picture book, ages 6 and up]

It makes a great Valentine’s gift for a child because Valentine’s Day is also International Book Giving Day! Give to a teacher to read to the class for a gift that amplifies the giving! I’m going to do that!

This is one of those picture book stories where the characters just happen to be African-American. It’s not the point of the story. The story is really about a fierce hula hooping rivalry on W. 139th Street between Kameeka and her friend (or frenemy) Jamara.

Distracted by their hula hooping dual, Kameeka forgets to get the sugar back to her mother in time to bake a cake for their neighbor, Miz Adeline, but all is well because Miz Adeline is a fierce hula hooper herself, despite her advanced age.

The illustrations and address suggest that The Hula-Hoopin’ Queen is set in the Bronx. What’s especially nice is the little details in the illustrations. Kameeka’s Brownstone apartment features her mother’s graduation picture, an African mask, and an African fabric throw pillow. [picture book, ages 6 and up]

The CosmoBiography of Sun Ra: The Sound of Joy is Enlightening by Chris Raschka

Chris Raschka captures the jazz great Sun Ra from his belief that he came from Saturn to his musical accomplishments. Give this to a young musician who feels like his music might be out-of-place!

Though some New Yorkers complained that Sun Ra was too far out (what did they expect from a Saturnian?), the wise ones, like Dizzy Gillespie and Thelonius Monk, said,

Sometimes all it takes is one person to start something good. In your community, that person could be you.

Sowing the seeds of freedom took ingenuity, perseverance and inner strength. It helped that Huntsville wanted to win a government contract for the space program and those in charge were hesitant to make headlines by arresting mothers and babies who steadfastly sat at lunch counters. Still, this non-violent model would not have worked everywhere in the South but it’s an inspiration that it did work during such dangerous times.

The integration of Huntsville, Alabama was peaceful by comparison to other Southern cities but not entirely without violence, as noted in the Author’s Note. While the public school integration in Huntsville occurred peacefully in Birmingham, Alabama, the Sixteenth Street Baptist Church was bombed, killing four girls. [advanced picture book, ages 5 and up]

Governor George Wallace, Jr. led obstructionist efforts as governor of Alabama to deny integration. I wondered what happened to him so I looked it up:

A 1972 assassination attempt left Wallace paralyzed, and he used a wheelchair for the remainder of his life. He eventually renounced segregationism but remained a populist. From Wikipedia This is the face of racism and it’s not pretty.

X: A Novel by Ilyasah Shabazz with Kekla Magoon

This YA book is special because it is written by Malcolm X’s daughter Ilyasah Shabazz with assistance by Kekla Magoon. Malcolm X has always been a charismatic but scary icon of the Civil Rights movement for me. Larger than life, he symbolized the dark to Martin Luther King, Jr’s light. It was in this story of his youth that I understood just how limited his life choices were (and are still today for many African American boys in inner American inner cities).

His intelligence, charm, and charisma resonate in this book and it’s tragic that he wasn’t given the opportunities his father wished for him. If his father wasn’t murdered for his own Civil Rights beliefs, would Malcolm have become Malcolm X or could he have been an icon in a different way?

I appreciate learning this side of Malcolm X from a reliable source — his daughter — who pulls no punches to cast her father in a glowing light. Instead, we get a peek back in time when the Civil Rights movement was just beginning. This book screams to me to be a movie. I hope that happens soon! [young adult, ages 12 and up]

For those who want to know more about Birmingham (and teens should definitely read its counterpart in Huntsville Seeds of Freedom), the confrontation can be illuminated by the relationship between two men: Reverend Fred L. Shuttlesworth who is a target of the Ku Klux Klan and Commissioner Gene “Bull” Connor. [young adult nonfiction, ages 12 and up] Frederick Lee “Fred” Shuttlesworth (March 18, 1922 – October 5, 2011)  was a U.S. civil rights activist who led the fight against segregation and other forms of racism as a minister in Birmingham, Alabama. He was a co-founder of the Southern Christian Leadership Conference, initiated and was instrumental in the 1963Birmingham Campaign, and continued to work against racism and for the alleviation of the problems of the homeless in Cincinnati, Ohio, where he took up a pastorate in 1961. Connor’s actions to enforce racial segregation and deny civil rights to Black citizens, especially during the Southern Christian Leadership Conference’s Birmingham campaign of 1963, made him an international symbol of racism. Connor directed the use of fire hoses and police attack dogs against civil rights activists, which included the children of many protestors. These tactics exposed the extent of racism when shown on national television. They served as one of the catalysts for major social and legal change in the southern United States and contributed to passage by the United States Congress of the Civil Rights Act of 1964.

On June 3, 1964, Connor resumed his place in government when he was elected President of the Alabama Public Service Commission. He suffered a stroke on December 7, 1966, and he used a wheelchair for the rest of his life. From Wikipedia

p.s. Do you think it’s a coincidence that George Wallace and Bull Connor both ended up in a wheelchair for the rest of their lives not long afer the Civil Rights war was won? Does this not make you believe in karma: what goes around, comes around? 8 thoughts on “Black History Month Picture Book of the Day”