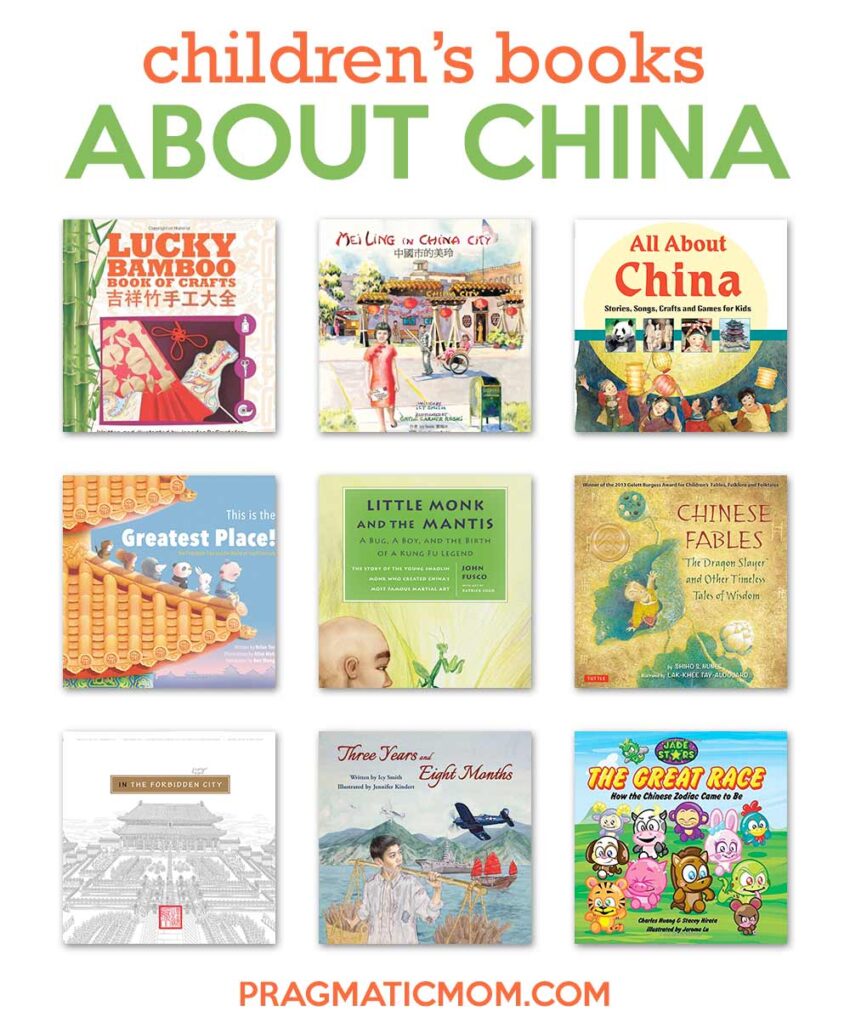 My kids do a country unit on China in second grade where they spent a day celebrating Chinese Culture with Red Envelope Crafts. My kids also studied Mandarin Chinese and my oldest middle school Chinese language teacher also did a Chinese New Year celebration with crafts and food.

With over 100 projects and ideas celebrating Chinese culture, Lucky Bamboo Book of Crafts is perfect for celebrating Chinese New Year with the kids and all year as well. Drawn from the historical narratives to introduce a unit on China in the classroom or use for kids learning to speak Mandarin Chinese. This is a resource that you will come back to again and again! It’s truly a treasure trove of craft projects on Chinese culture! [nonfiction, ages 4 and up]

The Sheep Beauty: A Story in English and Chinese by Li Jian, translated by Yijian Wert

The Docile and Compassionate Sheep

The eighth sign of the Chinese zodiac symbolizes obedience and kindness. People born in the year of the Sheep are sensitive, prudent, and upright. Beneath the Sheep’s mild exterior lies an inner strength. They are able to protect themselves when needed. They are selfless and easily touched by the misfortune of others. The Sheep can seem pessimistic and be a worrier. They tend to resign themselves to fate and don’t like to be stuck with routines.

In this Chinese fable, a kind doctor finds a wounded sheep and cares for it, bringing it to his home until the sheep is well. The village is threatened by a tiger who demands a child from the family. The villagers ask the doctor for advice and the sheep has a solution. It turns itself into a young girl and lures the tiger away from the village when the sheep tricks the tiger into falling into a spring. There is still danger; the tiger returns and tries to take a child but the sheep intervenes at the last second, sacrificing itself to save the boy. [bi-lingual in Mandarin Chinese and English picture book, ages 4 and up]

This is a Chinese folk tale that epitomizes the Chinese zodiac Sheep personality and is perfect to read to kids to celebrate this year’s Chinese New Year. Kid World Citizen: Sheep Crafts for Chinese New Year (a round up of 8) Here is a sheep coloring page from ChildBook.com. Mei Ling in China City: Divided by war, united by friendship … a lifeline of letters from China City to Manzanar by Icy Smith, illustrated by Gayle Garner Roski

Mei Ling in China City is a bi-lingual Chinese/English story, telling the story of the Japanese American relocation from an unusual perspective; that of Mei Ling in Los Angeles’ China Town writing to her best friend in Manzanar internment camp. As Mei Ling prepares to celebrate the Chinese New Year, she thinks of her friend Yayeko and others affected by the war. I love how this picture book embeds Asian American history into a Chinese New Year story. [advanced picture book, ages 8 and up]

All About China: Stories, Songs, Crafts and More for Kids by Alison “Aixin” Branscomb, illustrated by Lin Wang

If you want just one book to explore Chinese culture that includes projects, recipes, songs, and crafts then this is it. It works on many levels from preschool to high school. You can use the informative text and illustrations as background information, or simply use the art projects, crafts, and recipes to dive right for a full-body experience. It also works as a crash course for anyone about to visit China as a tourist or to do business. [nonfiction, ages 4 and up]

The Pandas and Their Chopsticks and Other Animal Stories by Demi

Think Aesop tales but with an Asian twist. Demi brings these delightful animal stories adapted from Chinese folk tales with a moral about life with her gorgeous illustrations. The morals of each of the stories are:

This Is the Greatest Place: The Forbidden City and the World of Small Animals by Brian Tse, illustrated by Alice Mak, translated by Ben Want

This book is a fun way for kids to explore The Forbidden City and its connection to the natural world. For anyone interested in Chinese architecture, young or old, This is the Greatest Place, shows the underpinnings of nature in Chinese culture. [picture book with Lift the Flaps, ages 4 and up]

Little Monk and the Mantis: A Bug, A Boy, and the Birth of a Kung Fu Legend by John Fusco, illustrated by Patrick Lugo

This is a must-read for anyone who likes Kung Fu, even if it’s just the Kung Fu Panda movies! It’s the story of the founder of a boy abandoned by the Shaolin monks who go on the develop the Praying Mantis Kung Fu style.

It takes half a lifetime to master even one animal of the five animal styles of Shaolin Kung Fu. Kung fu does not mean fighting, it means accomplishing a skill through hard work over time.

Respect: to consider yourself and others worthy of high respect.

Honesty: to be truthful

Kindness: to be gentle and helpful

Humility: not to think or consider yourself better than others

Perseverance: to continue despite opposition, hardship, or discouragement. To never give up.

[advanced picture book, ages 6 and up]

Chinese Fables: The Dragon Slayer and Other Timeless Tales of Wisdom by Shiho S. Nunes, illustrated by Lak-Khee Tay-Audouard

Drawn from China’s golden age of fables during the fourth and third century B.C., these timeless tales teach and entertain. With delicate watercolor illustrations by Lak-Khee Tay-Audourard, these stories invite the reader to guess at the lesson it is trying to impart. I’d read a single story at bedtime, right before lights out so that we could ponder the story. The lessons are not always that clear so it’s a different way of looking at stories. [advanced picture book, ages 6 and up]

In the Forbidden City by Chiu Kwong-Chiu

“This book contains a fascinating account of life beyond the gates of the Forbidden City during the Ming and Qing dynasties. An extensive survey of its history is included, with line drawings and fold-out spreads that cover everything from the lives of palace inhabitants to the numerous political conflicts and intrigues that was an inevitable part of palace life.”—Travel Life magazine

[advanced picture book, ages 8 and up]

It’s an interesting juxtaposition; using poems to introduce Chinese musical instruments to kids as well as a prose sidebar. If your kids are lucky enough to experience Chinese musical performances, this is the book to use before or after the concert! [poetry nonfiction, ages 4 and up]

As someone who is both Japanese and Chinese, I do think that the Japanese should apologize for war crimes committed during WWII when they occupied various countries including Hong Kong. The Japanese chose to steadfastly ignore any acknowledgments of crimes against ordinary citizens but their stories deserve to be remembered. Icy Smith puts forth a sanitized version of the three years and eight-month occupation of Hong Kong; the women forced into servitude for the Japanese army story is particularly poignant. [advanced picture book, ages 10 and up]

The Great Race: How the Chinese Zodiac Came to Be by Charles Huang and Stacey Hirata, illustrated by Jerome Lu

The Emperor’s race which determined the animals and order in the Chinese Zodiac is faithfully retold in this app-like illustrated picture book that will appeal to gamers. [picture book, ages 4 and up]

Maisy celebrates Chinese New Year by cleaning the house, shopping for food, a new outfit, and decorations. Her friends arrive, including new friend Tiger, and they eat the feast that Maisy prepared, play games, and receive Chinese red envelopes. Tiger tells them the story of the Chinese zodiac. They end the year with a parade and fireworks! Use this delightful picture book to introduce young children to Chinese New Year! [picture book, ages 2 and up]

Want to learn Chinese? Here’s a coloring sheet for a New Year Greeting from ChildBook.