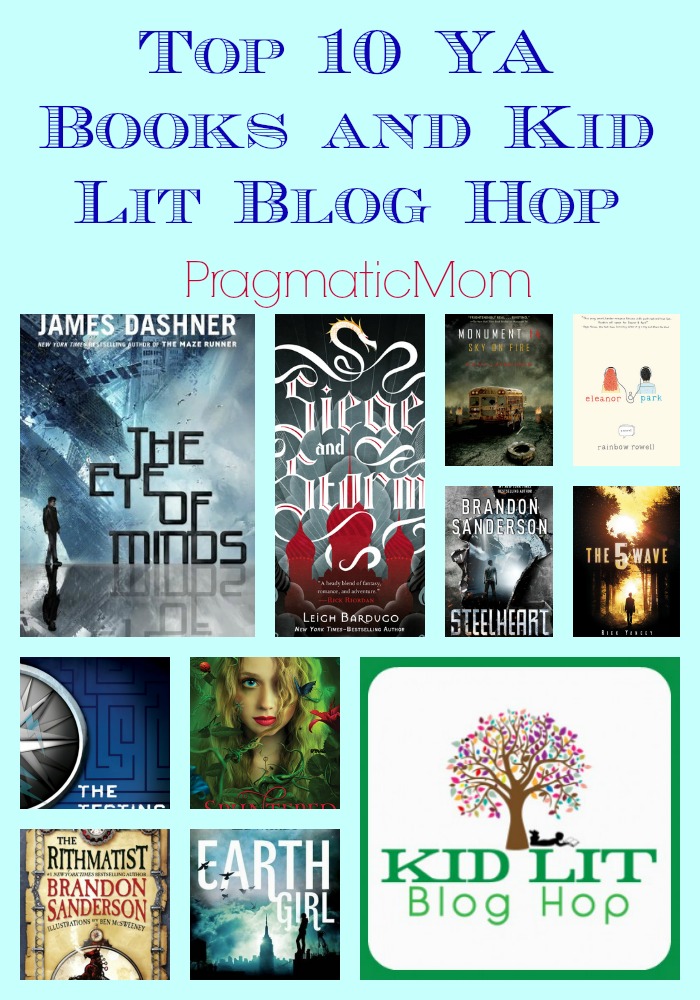 My friend Ginny sent me this list. We both have high school freshman girls and she must know that I’m always searching for books to present to Grasshopper and Sensei to keep her reading. Now that our girls are in high school, they no longer have assigned reading logs. While they get assigned books to read in English, their teachers do not require them to read a certain number of minutes a day like they did in elementary and middle school.

Thus, it is even harder to keep high schoolers reading as now they are truly reading for pleasure.

This is what my daughter tells me she likes:

So … I will continue to tempt her with books that will have to compete with her limited free time. This list is from the ALA. The only book that my daughter might read from this list is Eleanor & Park. My 10-year-old son will love The Eye of Minds next year.

My 14-year-old still might be too young for this but I think it’s worth waiting for! And I’m sure she has a bunch of friends who have already read it! [young adult, ages 15 and up]

The Raucous Librarian: “So…Eleanor and Park? Not so much a middle school book…Given its themes, plot, language, style, and tone, I’d say it’s firmly high school even for very mature, advanced readers. Some of the other people I know who’ve read it don’t even really think it’s YA…more like adult fic about teens. I wouldn’t want someone to be thinking they were getting a sweet, light first love story when this book TOTALLY is not that. Don’t get me wrong–it’s wonderful–it’s just very, very mature.”

When her mother’s mental health takes a turn for the worse, Alyssa learns that what she thought was fiction is based in terrifying reality. The real Wonderland is a place far darker and more twisted than Lewis Carroll ever let on. There, Alyssa must pass a series of tests, including draining an ocean of Alice’s tears, waking the slumbering tea party, and subduing a vicious bandersnatch, to fix Alice’s mistakes and save her family. She must also decide whom to trust: Jeb, her gorgeous best friend and secret crush, or the sexy but suspicious Morpheus, her guide through Wonderland, who may have dark motives of his own. [YA, ages 14 and up]

The Rithmatist by Brandon Sanderson

As the son of a lowly chalkmaker at Armedius Academy, Joel can only watch as Rithmatist students learn the magical art that he would do anything to practice. Then students start disappearing—kidnapped from their rooms at night, leaving trails of blood. Assigned to help the professor who is investigating the crimes, Joel and his friend Melody find themselves on the trail of an unexpected discovery—one that will change Rithmatics—and their world—forever. [YA, ages 12 and up]

The 5th Wave by Rick Yancey

Now, it’s the dawn of the 5th wave, and on a lonely stretch of highway, Cassie runs from Them. The beings who only look human, who roam the countryside killing anyone they see. Who have scattered Earth’s last survivors. To stay alone is to stay alive, Cassie believes, until she meets Evan Walker. Beguiling and mysterious, Evan Walker may be Cassie’s only hope for rescuing her brother–or even saving herself. But Cassie must choose: between trust and despair, between defiance and surrender, between life and death. To give up or to get up. [YA, ages 14 and up]

Trapped in a superstore by a series of escalating disasters, including a monster hailstorm and terrifying chemical weapons spill, brothers Dean and Alex learned how to survive and worked together with twelve other kids to build a refuge from the chaos. But then strangers appeared, destroying their fragile peace, and bringing both fresh disaster and a glimmer of hope.

Knowing that the chemical weapons saturating the air outside will turn him into a bloodthirsty rage monster, Dean decides to stay in the safety of the store with Astrid and some of the younger kids. But their sanctuary has already been breached once. . . .

Meanwhile, Alex, determined to find their parents, heads out into the darkness and devastation with Niko and some others in a recently repaired school bus. If they can get to Denver International Airport, they might be evacuated to safety. But the outside world is even worse than they expected. . . . [YA, ages 14 and up]

Just because she’s confined to the planet, doesn’t mean she can’t reach for the stars.

2788. Only the handicapped live on Earth. Eighteen-year-old Jarra is among the one in a thousand people born with an immune system that cannot survive on other planets. Sent to Earth at birth to save her life, she has been abandoned by her parents. She can’t travel to other worlds, but she can watch their vids, and she knows all the jokes they make. She’s an “ape,” a “throwback,” but this is one ape girl who won’t give in.

Jarra makes up a fake military background for herself and joins a class of norms who are on Earth for a year of practical history studies excavating the dangerous ruins of the old cities. She wants to see their faces when they find out they’ve been fooled into thinking an ape girl was a norm. She isn’t expecting to make friends with the enemy, to risk her life to save norms, or to fall in love. [YA, ages 12 and up]

The Testing by Joelle Charbonneau

It’s graduation day for sixteen-year-old Malencia Vale, and the entire Five Lakes Colony (the former Great Lakes) is celebrating. All Cia can think about—hope for—is whether she’ll be chosen for The Testing, a United Commonwealth program that selects the best and brightest new graduates to become possible leaders of the slowly revitalizing post-war civilization. When Cia is chosen, her father finally tells her about his own nightmarish half-memories of The Testing. Armed with his dire warnings (”Cia, trust no one”), she bravely heads off to Tosu City, far away from friends and family, perhaps forever. Danger, romance—and sheer terror—await. [YA, ages 12 and up]

Robert Jordan’s Wheel of Time series, and creator of the internationally bestselling Mistborn Trilogy, presents Steelheart, the first book in the Reckoners series, an action-packed thrill ride that will leave readers breathless. How far would you go for revenge if someone killed your father? If someone destroyed your city? [YA, ages 12 and up]

Siege and Storm by Leigh Bardugo

Hunted across the True Sea, haunted by the lives she took on the Fold, Alina must try to make a life with Mal in an unfamiliar land, all while keeping her identity as the Sun Summoner a secret. But she can’t outrun her past or her destiny for long.

The Darkling has emerged from the Shadow Fold with a terrifying new power and a dangerous plan that will test the very boundaries of the natural world. With the help of a notorious privateer, Alina returns to the country she abandoned, determined to fight the forces gathering against Ravka. But as her power grows, Alina slips deeper into the Darkling’s game of forbidden magic, and farther away from Mal. Somehow, she will have to choose between her country, her power, and the love she always thought would guide her–or risk losing everything to the oncoming storm. [YA, ages 12 and up]

The Eye of Minds by James Dashner

Michael is a gamer. And like most gamers, he almost spends more time on the VirtNet than in the actual world. The VirtNet offers total mind and body immersion, and the more hacking skills you have, the more fun. Why bother following the rules when most of them are dumb, anyway?

But some rules were made for a reason. Some technology is too dangerous to fool with. And one gamer has been doing exactly that, with murderous results.

The government knows that to catch a hacker, you need a hacker. And they’ve been watching Michael. If he accepts their challenge, Michael will need to go off the VirtNet grid to the back alleys and corners of the system human eyes have never seen—and there’s the possibility that the line between game and reality will be blurred forever. [YA, ages 12 and up] Welcome to the 51st Kid Lit Blog Hop where we continue to develop a dynamic and engaged community of children’s books bloggers, authors, publishers, and publicists. So, you are always more than welcome to join us by popping in a post and hopping around to meet some of your fellow Kid Lit bloggers and authors!

2. Link up any Kid Lit related post. This can be a link to a children’s book review, a discussion about children’s literature/literacy, or a post on a recently-read children’s book or one that you love from your childhood.

3. Please visit AT LEAST the TWO LINKS directly ahead of your own and leave them some love in the form of a comment. We are trying to build a community of bloggers, readers, parents, authors, and others who are as passionate about children’s literature as we are so please CONNECT and follow any or all of the blogs that interest you!

Interested in co-hosting the Kid Lit Blog Hop? If you’ve joined us before, you are welcome to join us again! Please email renee @ motherdaughterbookreviews (dot) com and put Co-Hosting Blog Hop in the subject line.