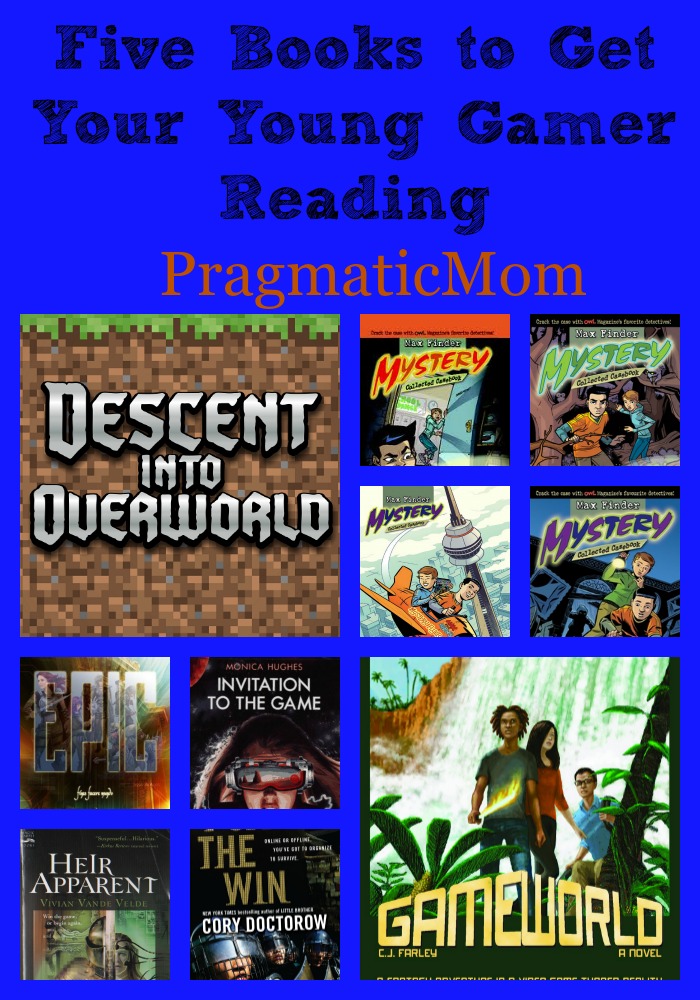 My son and I LOVED the Max Finder by Liam O’Donnell graphic novel mystery series when he was in first and second grade. These short mysteries were HARD to figure out; sometimes the two of us would be right, sometimes we missed the mark entirely. But, Liam’s books worked beautifully to keep my son reading and wanting more.

Now, he has a new series that is honestly sheer genius! A chapter book series based on MINECRAFT! My son is a serious gamer — he actually went to Minecraft camp not once but twice! — and my husband and I work hard but futilely to keep his screen time down to two hours a day. Our policing job is going to get easier!

Got a reluctant reading gamer in your life?

They’re the ones who would rather smash zombies than turn pages. And really, who can blame them? Video games offer a world of adventure with a side order of colorful graphics and loud explosions. And books? Well, books have words on a page. On the surface, it’s not a fair match up. Getting a young gamer to read a book often feels like an epic quest doomed to fail.

I can relate. I’m a gamer who was once a reluctant reader. But sometime around middle school, I discovered the power of words on a page. Now, I’m a teacher who struggles each day to get my game-loving students reading. I am also children’s author. Video games are at the heart of my books, like Ganked my young adult gamer geek mystery or Descent into Overworld, my Minecraft-inspired adventure for middle graders. By using video games as settings for my stories and gamers as my heroes, many reluctant readers are able to find a welcome home in my stories.

Thankfully, I’m not the only author bridging the divide between books and video games. Check out these five books that are sure to get the young gamer in your life to put down the game controller and pick up a book.

For the inhabitants of New Earth, success in life depends on success in the video game known as Epic. Every person on New Earth must play the game, fighting monsters and completing quests to earn gold that translates into real world wealth and power. For teenage Erik, Epic is a game rigged to favor those who are already rich and powerful. Refusing to play by the rules of the game, Erik creates a character doomed to fail and in the process unlocks the dark secret  that caused his father’s exile to the edges of civilization and could lead to his family’s salvation.

Epic is the first in the Avatar Chronicles trilogy and is a great read for teen readers not put off by thick books. Weighing in at 384 pages, it might seem daunting for reluctant readers, but the video game battle sequences, inspired by real world games like World of Warcraft, will keep readers engaged. [chapter book, ages 9 and up]

Every gamer is familiar with those two dreaded words: “Game Over”. When 14 year old Giannine gets trapped inside the virtual reality game Heir Apparent, “Game Over” could mean life over, if she doesn’t solve the game’s puzzles in time. Taking on the role of a medieval peasant suddenly in line to inherit the kingdom’s throne, Giannine must dodge rivals, outwit a riddling dwarf and defeat a man-eating dragon before returning to reality with her life, and her mind, in one piece.

Game-loving readers will relate to Giannine’s struggles as she starts her video game over and over again after each mistake. With each restart, Giannine learns from her mistakes and gets one step closer to overcoming her enemies, inheriting the throne and escaping the game.

Vande Velde writes with a sharp humor that gamers will enjoy. By making her hero a girl, she challenges the myth that games are just for guys. That said, even with a girl protagonist, middle grade boys will be pulled into this story of monster-filled technology gone wrong. [chapter book, ages 10 and up]

For the Win by Cory Doctorow

In this globe-trotting, virtual world hopping adventure, Cory Doctorow takes teen readers deep into the dark side of video games to rally all gamers in a fight for equality and human rights.

Told from multiple perspectives, For the Win follows a group of teens each with their own reasons to play their favorite online video game. Among them is Leonard, a typical American teen gamer and fifteen year old Mala from rural India who toils for hours in the game as a low-paid gold farmer, harvesting virtual items to sell to rich gamers for real money. When they’re contacted by mysterious player known as Big Sister Nor, these two gamers are soon caught up in a fight to protect their fellow gamers from exploitation both in-game and in the real world.

While For the Win deals with some big issues, like worker’s rights and globalization, its fast action and gamer-speak style of writing will appeal to readers who like a little espionage and hacking with their dragon-hunting adventures. [young adult, ages 13 and up]

Invitation to the Game by Monica Hughes

From the early 1980s, before there were Xboxes or Playstations, Canadian science fiction author Monica Hughes was writing video game inspired adventures for middle grade readers. Invitation to the Game (also published as The Game) is one of her finest. In this short book, Hughes takes readers to a dystopian future where a group of teenagers, deemed unemployable by society, are given the chance to play a virtual reality game that tests their endurance and survival skills. As they spend more time in the mysterious game, the teens find the lines between reality and fantasy begin to blur, leading to an unexpected climax that holds all the hallmarks of a classic science fiction plot twist.

At under 200 pages, Invitation to the Game is an ideal length for even the most page-phobic reluctant reader. The suspense created behind the game’s true purpose mixed with some very tense survival scenes will keep gamers guessing until the very end. It is definitely a sci-fi classic that holds up even in today’s high tech reality. [young adult, ages 12 and up]

Sixth-grader Dylan Rudee is good at only one thing: video games. He’s not so good at standing up to the bullies who harass him at school, getting homework done or succeeding at anything that doesn’t involve a game controller. When Dylan gets a chance to compete in the Game Changers video game tournament, he hopes it will solve his problems and help his aunt who just lost her job. But when his gaming skills release some very real creatures from Jamaican folklore, Dylan and his friends are thrown into an adventure that threatens to destroy all worlds, both real and imagined.

CJ Farley’s Gameworld draws on West Indian mythology and features a multicultural cast that  brings some much needed diversity to modern children’s books while telling an action-packed story sure to engage middle grade readers. [chapter book, ages 10 and up]

In Real Life by Lawrence Tabak

Fifteen-year-old math prodigy Seth Gordon knows exactly what he wants to do with his life—play video games. Every spare minute is devoted to honing his skills at Starfare, the world’s most popular computer game. His goal: South Korea, where the top pros are rich and famous. But the best players train all day, while Seth has school and a job and divorced parents who agree on only one thing: “Get off that damn computer.” Plus there’s a new distraction named Hannah, an aspiring photographer who actually seems to understand his obsession.

While Seth mopes about his tournament results and mixed signals from Hannah, Team Anaconda, one of the leading Korean pro squads, sees something special. Before he knows it, it’s goodbye Kansas, goodbye Hannah, and hello to the strange new world of Korea. But the reality is more complicated than the fantasy, as he faces cultural shock, disgruntled teammates, and giant pots of sour-smelling kimchi.

What happens next surprises Seth. Slowly, he comes to make new friends, and discovers what might be a breakthrough, mathematical solution to the challenges of Starcraft. Delving deeper into the formulas takes him in an unexpected direction, one that might just give him a new focus—and reunite him with Hannah. [young adult, ages 14 and up]

Game On and Read On

These five books only scratch the surface on books that bridge the worlds between pages and pixels. While there are many more amazing video game inspired stories, hopefully these suggestions will spark a love of reading in the gamer in your life.

Want Your Own Gamer Fiction?

Enter the giveaway for your chance to win one of three signed copies of Descent into Overworld, the first book in my new action-adventure series set in the world of Minecraft. Please use the Rafflecopter below. There will be 3 winners! Liam is the award-winning author of over 35 books for reluctant readers. He is also a gamer and a teacher in Canada, where he uses video games like Minecraft to engage students with reading and writing. His latest book, Descent into Overworld, is a middle-grade adventure set in Minecraft and is perfect for reluctant reader gamers. His young adult gamer geek mystery, Ganked, is an ideal choice for tech-savvy teens who like magic, monsters and a little computer hacking with their whodunits. Every month, Liam shares a new tech resource for parents and teachers to get their reluctant readers hooked on books. Visit liamodonnell.com and subscribe for your first resource and get your reluctant readers reading! To examine any book more closely at Amazon, please click on image of book. 10 thoughts on “Five Books to Get Your Young Gamer Reading & GIVEAWAY!”