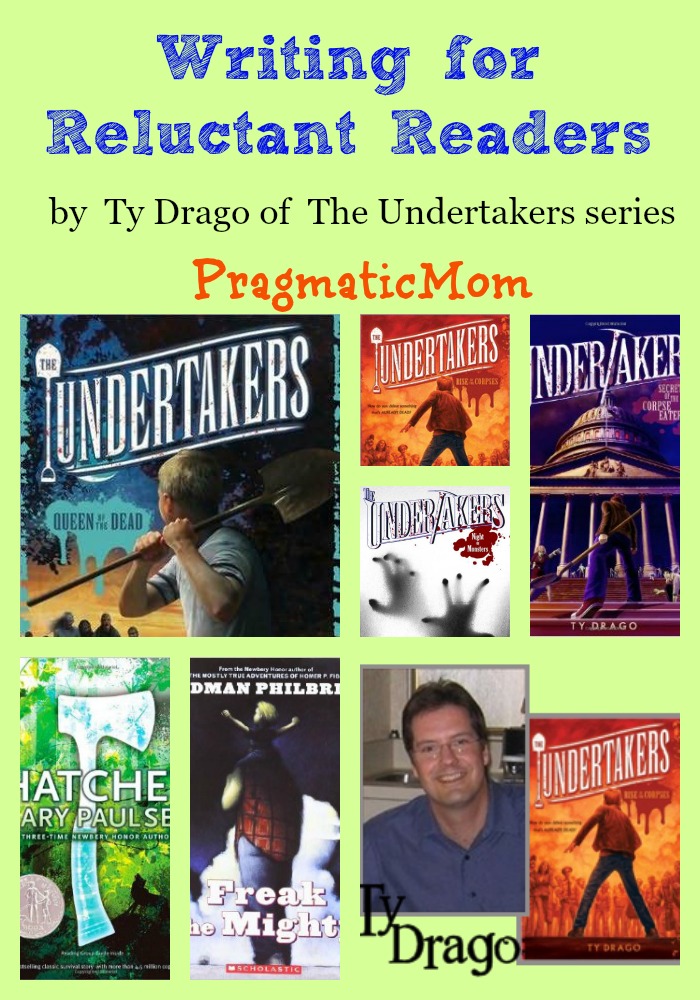 Please welcome my guest blogger today, author Ty Drago of The Undertakers series. He’s giving advice based on years of school visits on how to get reluctant readers writing.

I often tell people that I “scare children for a living.”

It’s a cute, funny thing to say — and it’s true, given the fact that my claim to fame is a series of horror novels written for middle grade kids (ages 10 and up).

But the truth is that I don’t want to scare anyone.  I’m not interested in inspiring nightmares or giving anyone the shakes before bed.  My goal in writing what I do is to welcome middle schoolers into my books, encourage them to keep coming back, and to try to win the hearts of the often un-winnable reluctant readers.  And I do this by presenting as original and, yes, frightening a story as I can.

My Undertakers series chronicles a war between intrepid teens and an invasion of other-worldly beings who animate and occupy the bodies of the recently dead.  These “smart” zombies are intelligent, articulate, and bent on world conquest.  Worse, they’re able to disguise their deadness behind an illusion of normalcy, a telepathic barrier than only this small group of adolescent resistance fighters is able to penetrate.

These kids call themselves the Undertakers and they range in age from 11 to 17.  All are runaways, unable to go home because doing so would put their families at risk.  No one will believe them.  No one sees what they see.  So all they can do is somehow learn to fight back.  They’re outmatched, outgunned, and totally alone.  They’re also humanity’s only hope.

I’ve gotten more than a few emails from parents thanking me for the books, three of which have so far been released (the last two will out in spring and fall of 2015, respectively). These moms and dads make it a point to tell me that their son or daughter is a “reluctant reader” and that they’re so happy to see them jazzed about the series and eager for the next installment.  That sort of thing is music to my ears, of course, and not just because it speaks of sales to come.

It tells me that I’m doing my job.

My stories aren’t the sort that win awards.  I don’t get very many literary accolades.  But that’s okay, because the fact is that there are two kinds of children’s fiction: literary and commercial.  Literary includes classics like Hatchet and Freak the Mighty, while commercial authors have brought us the Percy Jackson, Harry Potter, and Darren Shan tales, to name a few.  I definitely fall into the latter category.

But at least I’m read, and voluntarily at that!

Though it’s not always easy. Children’s writers today have a lot with which to contend and compete. Television shows, video games, the internet, texting, are just some of the distractions tugging at my target audience.  If I’m going to win them away from so many experiential snares, I need to bring something more to the table than simply a “good story.”  I need to show these kids something they haven’t seen before.

The Undertakers adventures are intense and, frankly, a bit graphic.  These are walking cadavers, after all, and they tend to look like it.  But, while I definitely show evil in my plots, I never paint my bad guys as good guys.  Instead, I maintain a very clear delineation between right and wrong, and put my main focus on the kids themselves.  My young heroes are courageous, self-sacrificing, and fiercely loyal to one another.  They’re also undeniably cool, a claim that my fans keep confirming!

To date, I’ve visited nearly sixty middle schools across six states, speaking to more than 25,000 5th, 6th, 7th and 8th graders about writing, dream-chasing, and the great mystery of where ideas come from.  Throughout all of that, I’ve yet to have a teacher or parent come up to me to admonish me for my themes or call my work in anyway inappropriate.  Instead, they almost universally express their appreciation to me for luring kids who “hate reading” into books that they can appreciate and embrace.  It’s a wonderful feeling.

So, with all this mind, when people ask me what my rules are for writing to middle schoolers, I respond thusly:

Commercial authors, as a rule, aren’t out to change the world.  We’re working storytellers who are trying, sometimes desperately, to make a living doing what we love.  So keep your awards and professional accolades!  I’ve got a box filled with hundreds of fan letters, with more coming in all the time.  And I have a readership that appreciates what I give them and clamors for more.  My only real problem is, now that the Undertakers series is concluded, what comes next!

Personally, I can’t wait to find out. The Undertakers: Rise of the Corpses

The Undertakers: Queen of the Dead

The Undertakers: Night of Monsters (a novelette)

The Undertakers: Secret of the Corpse Eater

New titles from The Undertakers series by Ty Drago coming soon! The last two will out in spring and fall of 2015, respectively.

The Undertakers: Last Siege of Haven

The Undertakers: End of the World 4 thoughts on “Writing for Reluctant Readers by Ty Drago”