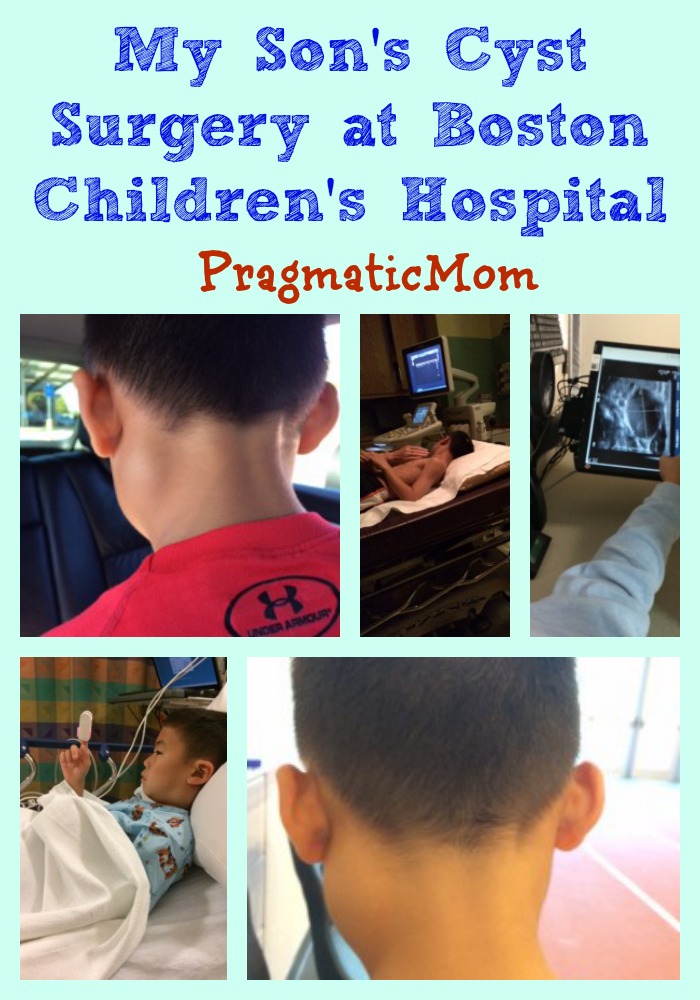 It turns out that my husband was thinking the same thing this past summer. Our pediatrician is only about 7 miles away but it usually takes us an hour to get there because the traffic is always in a snarl around Longwood Medical Center in Boston. Maybe it was time to get a new doctor closer to home?

But our doctor is really awesome and he’s also affiliated with Boston Children’s Hospital. If anything ever happened, I’d want my kids to be treated there, especially if it’s something unusual.

In August, my daughter brought home a virus that was running rampant at her sleepaway camp. She was sick with fever, persistent cough and achy limbs for about 5 weeks. My husband was even sicker. PickyKidPix couldn’t play soccer for two weeks, a first for her. I was in bed for a week but my son was only sick for about a weekend. It turned out that his virus seemed to go into his neck where a strange swelling occurred.

The Lump: AKA The Evil Unborn Twin My Son Named “Greg”

At first, I pooh poohed the lump, thinking it was an infected lymph node. After 2 weeks, my husband freaked out and rushed him to the pediatrician. The blood work came back negative and the lump got smaller so we all breathed a sigh of relief!

But then, a week later, the lump got bigger and bigger! We went back to the pediatrician who was pretty sure that it would not need to be removed but recommended that we get an ultrasound and see a specialist, Dr. Michael Cunningham in Ear, Nose, Throat at Boston Children’s Hospital.

My husband joked that the lump was our son’s evil unborn twin. My son promptly named it “Greg”. His friends all started referring to it as “Greg” as well. The Ultrasound: It Needed to Be Removed

The ultrasound at Children’s Hospital was but a walk across the street and a short wait. The lump was filled with fluid — good news! — because solid would indicate possible cancer. A fluid filled lump was likely a benign cyst but it would probably have to be surgically removed, a little tricky because it’s under the muscles and near an artery. The round thing in the middle of the ultrasound is the cyst. The MRI: A Day of Mishaps

Dr. Cunningham, the ENT specialist, turned out to be a rockstar. He has the bedside manner of the perfect children’s doctor and he was reassuring and helpful. We could not be in better hands. He needed an MRI for the surgery for the precise location of important arteries to avoid so we drove an hour away to Peabody that same day after our appointment with him to get the MRI scan. No time like the present.

The MRI took about an hour and went smoothly enough, but then we had a series of fails.

Flat tire in the parking lot! We needed a flatbed tow truck tow the car which is not fast! Because my son’s surgery was considered elective — there was a possibility that the cyst could become infected and also could possibly burst — we were able to delay the surgery for about a week so that my son could enjoy his 10th birthday party which was set up months ago. By the day of the surgery despite a round of antibiotics that our doctor hoped would shrink the cyst, it only grew bigger! What is surgery like at Boston Children’s Hospital? It really is an amazing experience. You are at the Disneyworld of children’s hospitals where the lines are short and every detail is taken care of for you. My son loved the warm blankets that are kept in a special machine that looks like a refrigerator. He could help himself to a warm blanket whenever he wanted!

We did come in a week before the surgery for the pre-op appointment. We met with anesthesia and set up the paperwork for the surgery. My son was thoroughly informed with what was to happen to him including choosing which flavor of gas he wanted in order to go to sleep. He chose raspberry but cotton candy was a close second!

The day of the surgery, we started early and went to the pre-op center where we waited in a room and then went to the surgical waiting area where my son changed into hospital pjs. We ran into this delivery robot on the way there!

While we waited for my son to go into surgery, a volunteer caricaturist drew my son anyway he wanted. He chose ninja. I snuggled with my son and read him the last installment of Percy Jackson, The Blood of Olympus by Rick Riordan. Both were a nice distraction for my son. My husband went into the operating room with him until he went to sleep and then we both waited outside until the surgery was over. Two and a half hours later, the surgery was complete. The cyst, the size of an egg, was removed from under the muscles of my son’s neck. The incision was large and it took two and a half more days in the hospital for the wound to drain out before we could go home. I think Blood of Olympus was a good choice for a book … blood was involved in both worlds! It’s been over a month now and my son is fully recovered. We were lucky that the incision healed nicely and did not get infected. The scar is shrinking and will fade into a small line in time. Our doctor placed it on the neck where there would naturally be a fold anyway, but we all agree that chicks dig scars and that scars are pretty cool!

The families that we encountered in the pre-op waiting area came from all over the world. We feel so fortunate that Boston Children’s Hospital is only 7 miles from where we live. If your child has a weird genetic malformation like my son’s cyst (diagnosed a Brachial Cleft cyst resulting from genetic material going awry during his formation in the womb), Children’s Hospital is the place to be. They have seen it all!

My husband jokes that my son’s cyst is due to my smoking crack when I was pregnant (because my son also was underformed ears and a bald spot on his head also caused by cells not going where they were supposed to in gestation). That’s not true! But one thing is for sure: we are NOT switching pediatricians!