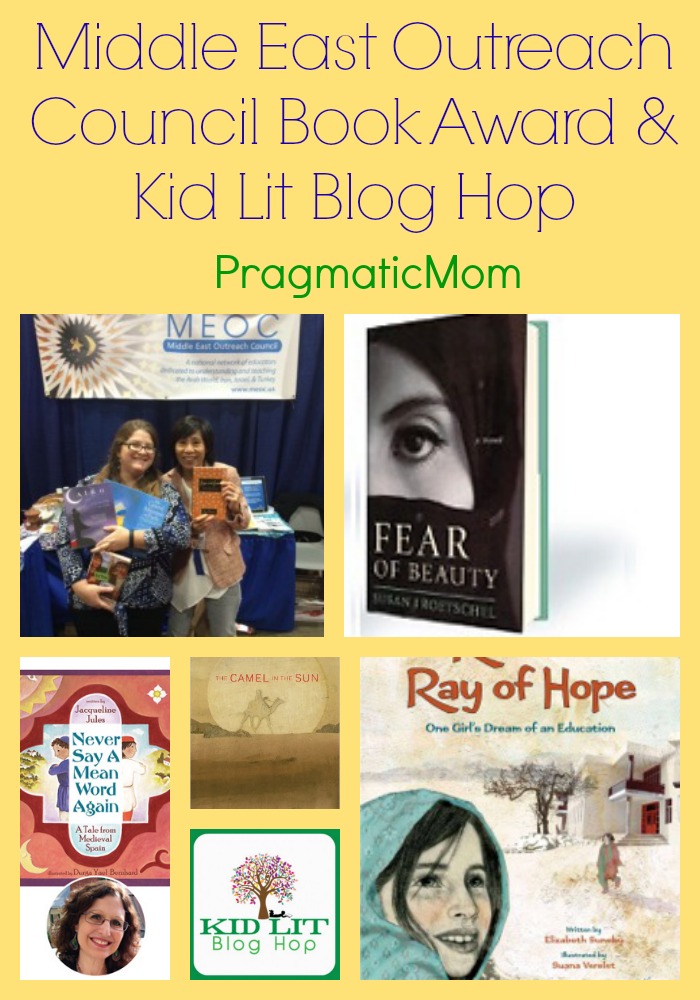 Established in 1999, the Middle East Book Award recognizes quality books for children and young adults that contribute meaningfully to an understanding of the Middle East and its component societies and cultures.

Books are judged on the authenticity of their portrayal of a Middle Eastern subject, as well as on characterization, plot, and appeal for the intended audience. For this award, the Middle East is defined as the Arab World, Iran, Israel, Turkey, and Afghanistan.
Awards are given in three categories: Picture Books, Youth Literature, and Youth Nonfiction.

Here are the winners!

Razia’s Ray of Hope: One Girl’s Dream of Education by Elizabeth Suneby, illustrated by Suana Verelst

Set in a village in Afghanistan, Razia and her family watch as a new school is being built–just for girls! She hopes more than anything to attend but faces resistance due to a traditional gender roles, family needs, and a community overcoming the effects of war.  Based on a true story, Razia’s Ray of Hope offers a view of Afghan culture in real world context, emphasizing the role of family members in problem-solving and the importance of education. [picture book, ages 8 and up]

The Camel in the Sun by Griffin Ondaatje, illustrated by Linda Wolfsgruber

A sad but hard-working camel belongs to an unfeeling merchant Salim.  As they travel and trade through the desert in what is now Saudi Arabia, Salim pays little attention to the comfort and needs of his increasingly forlorn camel.  After a visit to Salim by the Prophet Mohammed, who shows empathy toward the camel, Salim has a much-needed change in heart and behavior. [picture book, ages 5 and up]

Two boys, one Jewish and one Muslim, grow up as close friends in medieval southern Spain, or Al-Andalus. One of their fathers, a powerful vizier, comes up with a creative strategy for settling a conflict between the boys.  It resolves the issue and sheds light on the challenges of friendship any time but especially when there are cultural and status differences.  The story is based on a real-life actions of the Jewish poet Samuel Ha-Nagid, a royal advisor in 11th Century Muslim Spain. [picture book, ages 4 and up]

Fear of Beauty by Susan Froetschel

Fear of Beauty by Susan Froetschel offers a compelling portrait of a rural Afghanistan village, Laashekoh, and its complex relationship with a recently established American military outpost. All of the novel’s players–villagers, Americans, and Taliban–work to figure out each other’s multiple, and sometimes conflicting intentions. [young adult, ages 14 and up]

p.s. The Kid Lit Blog Hop is on hiatus this week for the December holiday season but stay tuned for the first and third Wednesday of January.