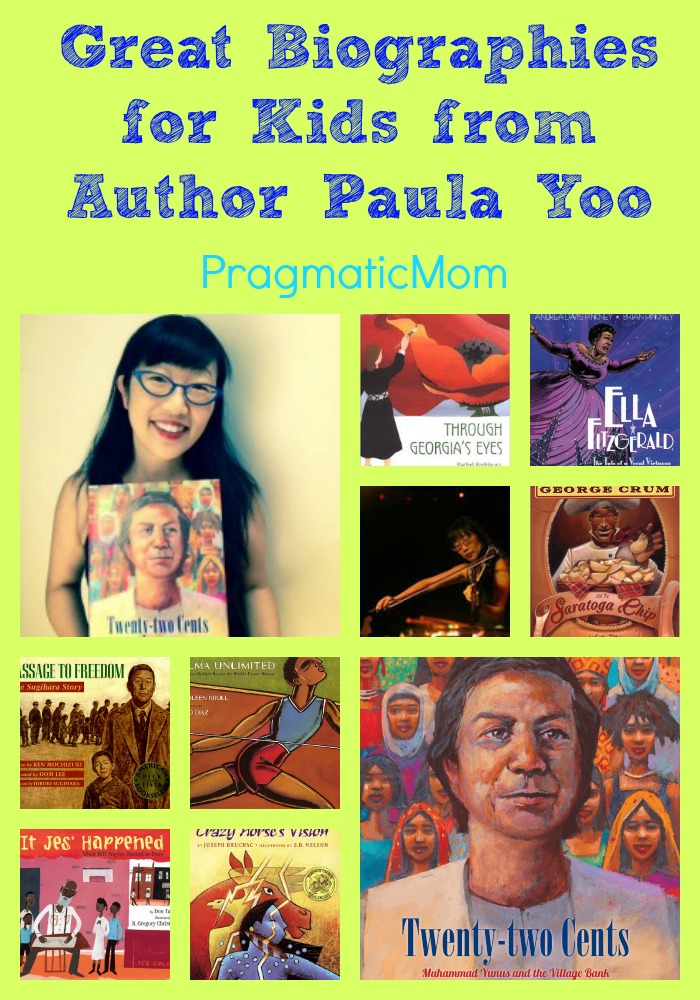 Before I started writing books for children, I was a journalist. I wrote for The Seattle Times, The Detroit News, and PEOPLE Magazine.

I learned that being a journalist was not just about digging for the truth and finding the facts. Being a journalist also required storytelling. How do you compile all the facts, statistics, research, and interview quotes into a compelling and relevant story that captures a reader’s interest and inspires that reader to learn something new?

So when I wrote my first children’s book, I chose to write a biography. A biography was the perfect transitional bridge from journalism to children’s literature for me.

A biography is the story of a person’s life. It provides a natural structure for telling a story. What happened in that person’s childhood to influence their path in life? How did their contributions as an adult affect the world?

Whenever I write a picture book biography, I first immerse myself in READING picture book biographies to inspire me. Below is a list of some of my favorite children’s picture book biographies about a wide range of characters, from the man who created the potato chip to a World War II hero to an Olympic Gold Medalist who overcame a physical disability to musicians, artists, and other unique heroes. These books helped me as I worked on my own biographies, including my latest book TWENTY-TWO CENTS: MUHAMMAD YUNUS AND THE VILLAGE BANK, illustrated by Jamel Akib.

I hope this list inspires children, parents and teachers to visit their local libraries and explore the biography bookshelves!

I hope you enjoy this list! What are your favorite children’s picture book biographies?

Crazy Horse’s Vision is about the life of the Native American leader Crazy Horse (1840-1877) of the Oglala Lakota who fought to protect the territories of the Lakota people against the U.S. government. I love the book for its lyrical, poetic writing and vivid art work by artist S.D. Nelson who is of Lakota (Sioux) Indian descent. [biography picture book, ages 5-9]

Ella Fitzgerald: The Tale of a Vocal Virtuous by Andrea Davis Pinkney with Scat Cat Monroe, illustrated by Brian Pinkney

Ella Fitzgerald: The Tale of a Vocal Virtuousa is about the life of renowned jazz vocalist Ella Fitzgerald (1917-1996). She is known as “The Queen of Jazz.” I enjoyed the innovative way this book is laid out as a record album with four “tracks” featuring stories in Ella’s life as told from the point of view of a jazz cat. [biography picture book, ages 5-9]

George Crum and the Saratoga Chip by Gaylia Taylor, illustrated by Frank Morrison

George Crum and the Saratoga Chip is about the life of George Crum (1828-1914), an African/Native American trapper and guide in the Adirondacks and cook/restaurant owner who created the potato chip. It’s a fun and unique biography about an unusual yet important moment in culinary history. [biography picture book, ages 5-9]

Hello, I’m Johnny Cash is about how Johnny Cash (1932-2003) used music to escape not only his difficult childhood but to become one of America’s most famous and influential crossover musicians in rock ’n roll, gospel and country music. I love how this biography uses free verse poetry to portray how Johnny overcame poverty in his childhood through his gift of music. [biography picture book, ages 5-9]

It Jes’ Happened: When Bill Traylor Started to Draw is about the life of former slave Bill Traylor (1854-1949) who became a famous folk artist at the age of 85 when he began to draw pictures based on his memories of his childhood in Alabama. He is now considered one of the central figures in the field of “self-taught” modern art. [biography picture book, ages 5-9]

The Passage to Freedom: The Sugihara Story by Ken Mochizuki, illustrated by Dom Lee, and afterword by Hiroki Sugihara

Passage to Freedom: The Sugihara Story is about the life of Chiune Sugihara (1900-1986), a Japanese diplomat in Lithuania in 1940, who defied the government to assist thousands of Jews escape the Holocaust. The book is illustrated by one of my favorite artists, Dom Lee, who also illustrated my first book SIXTEEN YEARS IN SIXTEEN SECONDS: THE SAMMY LEE STORY (Lee & Low Books 2005). I love the epic nature of this book – it may be a picture book but its subject is powerful and poignant. [biography picture book, ages 6-12]

Snowflake Bentley is about the life of photographer Wilson Bentley (1865-1931) who perfected the process of photographing snowflakes on black velvet before they melted. His technological prowess and passion for nature would prove to the world that no two snowflakes were alike. This book won the Caldecott Medal in 1999 for its poetic text and unique carved woodcut artwork and informational sidebars. [biography picture book, ages 4-8]

Strange Mr. Satie is about the life of eccentric French composer Erik Satie (1866-1925). This book appealed to me especially because I am also a violinist and love any books about classical music composers. This biography is told in a whimsical tone to match Satie’s surreal and eccentric life. [biography picture book, ages 6-12]

Through Georgia’s Eyes by Rachel Rodriguez, illustrated by Julie Paschkis

Through Georgia’s Eyes is about the life of iconic American painter Georgia O’Keeffe (1887-1986) who was inspired by nature and became known as “the Mother of American Modernism.” I liked this book for its spare and simple yet evocative text, as well as its artwork that honors O’Keeffe’s style.  [biography picture book, ages 5-9]

Wilma Unlimited: How Wilma Rudolph Became the World’s Fastest Woman is an inspirational biography about the life of Olympic Gold Medalist Wilma Rudolph (1940-1994) who overcame infantile paralysis (caused by the polio virus) as a child to become a gifted track athlete. She transcended her childhood physical disability to win three gold medals in track and field in the 1960 Olympics in Rome and also became a civil rights and women’s rights pioneer. [biography picture book, ages 6-12]

The Quickest Kid in Clarksville by Pat Zietlov Miller, illustrated by Frank Morrison

Miller’s story about four girls who want to watch a parade in their hometown wonderfully showcases how Clarksville put on their first event for blacks and whites in the town’s history. Olympic track star Wilma Rudolph made history with her three gold medals, but this picture book — a perfect blend of fiction and biography — shows how she inspired change for the better in everyone, including the four girls in the book who admire her! [picture book, ages 4 and up]

A Little More About Paula Yoo

Paula Yoo is a children’s book author and TV writer/producer. Her latest book, Twenty-Two Cents: Muhammad Yunus and the Villlage Bank , is a Junior Library Guild “Best Book” selection. Other books include the YA novel Good Enough and IRA Notables Sixteen Years in Sixteen Seconds: The Sammy Lee Story and Shining Star: The Anna May Wong Story. When she’s not writing, Paula likes to play her violin and hang out with her three cats.

Shining Star: The Anna May Wong Story by Paula Yoo

Anna May Wong—the first Chinese American movie star—was a pioneer of the cinema. Her spirited determination in the face of discrimination is an inspiration to all who must overcome obstacles so that their dreams may come true. [picture book biography, ages 6 and up]

The inspirational true story of Sammy Lee, a Korean American who overcame discrimination to realize both his father’s desire that he become a doctor and his own dream of becoming an Olympic champion diver. [picture book biography, ages 6 and up]

“Teens living through the pressure of college applications and questioning their futures will sympathize with Patti in this enjoyable, funny but not superficial read.” (Kirkus Reviews) [chapter book, ages 14 and up] 10 thoughts on “Great Biographies for Kids From Paula Yoo”