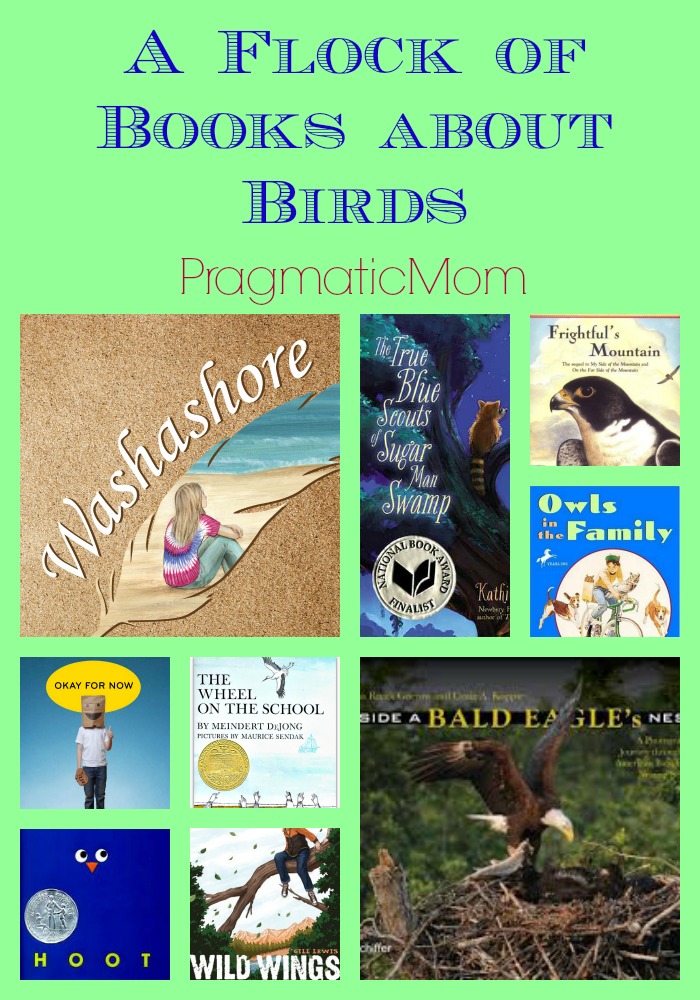 Please welcome author Suzanne Goldsmith, winner of the 2014 Green Earth Book Award in the Young Adult Category, for Washashore. Today she is sharing her favorite books about birds! Suzanne is giving away 3 signed copies of her book to 3 winners! See the Rafflecopter below to win. (This giveaway is going to have a short duration so that winners might receive their copies before the holiday season ends.)

And yet they are so very different from us. Which is why we find them so fascinating.

I should know. Starting from zero knowledge, I willingly dove into months of bird research to write a children’s novel that centers on the survival story and the migration pattern of the majestic ospreys.

The osprey, as regular readers of the Pragmatic Mom will know, is a raptor with a six-foot wingspan that eats only fresh fish, and that travels as far as 3000 miles each way during its fall and spring migrations. Ospreys catch their dinner by dive-bombing headfirst from 50 to 200 feet in the air, reaching out at the last second with long, sharp, curved and deadly talons to snag a fish. The bird is often pulled right under water in the process.

Then the osprey bursts from the water with a fish struggling in its claws (it’s successful about 70 percent of the time!), shakes like a dog in midair, and flies away to eat or feed its young. It’s an extraordinary sight – and one I didn’t witness for real until AFTER I published my book. But I saw it on video, and I was hooked.

Another thing that drew me to the ospreys was their heroic return from the brink of extinction, with an assist from humans. Ospreys were profoundly affected by the pesticide DDT, which was widely used in the US until it was banned in 1973. By that time there were few ospreys left in the U.S. Yet by stopping the use of DDT, and by supporting the birds with safe, man-made nesting spots atop tall poles, we were able to reverse their decline before it was too late. It’s a true environmental success story.

My novel, Washashore, takes place during that time of waiting, 1976: when the birds had a chance to bounce back from the edge, but their fate was still unclear. The story begins when my main character, Clem, finds a drowned osprey with ID bands on its legs on a Martha’s Vineyard beach. Her quest to find out more about the bird leads her to Daniel, a lonely boy who raises orphaned birds. After learning about the birds’ plight, Clem helps with a habitat restoration project while she and Daniel wait for the return of the migrant birds, hoping the dead osprey’s mate will return from its winter retreat in South America and start a new family.

At the same time, Clem is waiting for her own father to return from a job far away; she’s wondering if her family, too, will survive.

Until now, Clem had only noticed seagulls and sandpipers at the beach. But Daniel showed her how little she knew. There were loons, goldeneyes, kingfishers, scaup. Mergansers. Sometimes Harlequin ducks. Eiders. Cormorants. Kestrels. Scoters. Even the seagulls came in different varieties…Soon she could recognize the different sandpipers and plovers by the way they ran along the beach. Some zigzagged, others moved in a straight line. Some bobbed their heads rhythmically. She figured out how to identify birds in flight from the movements and the angle of their wings. She knew that the scaup in Menemsha Creek near Daniel’s house fed on tiny crabs, and that the sanderlings on the ocean beach ate the droppings of other birds to get the protein they needed during the winter. Once in a great while, she even spotted a bird before Daniel did. Or maybe he just let her think so.

The drama of migration, the threats to many bird species, the unique behaviors of so many varieties of birds, and our attraction to the miracle of flight offer fertile ground for authors looking for stories in nature. They also offer a wonderful opportunity for kids to connect stories with science and nature.

Here are a few of my favorite bird-related books for kids and teens.

Frightful’s Mountain by Jean Craighead George (grades 4-8) brings back the falcon, Frightful, who played a role in the book on which a popular movie was based, My Side of the Mountain. Sam Gribley has been told that it is illegal to harbor an endangered bird, so when Frightful comes home, he has to let her go. But Frightful doesn’t know how to live alone in the wild. Frightful struggles to survive and learns to enjoy her new freedom. But she feels a bond with Sam that can never be broken, and more than anything else, she wants to return to him.

Inside a Bald Eagle’s Nest by Tina Ruark Gorrow and Craig Koppie is a photographic and factual account of American Bald Eagles during nesting season. Through 160 breathtaking images captured in eagles’ natural habitats, this book offers a rare glimpse into the behaviors and activities of America’s national symbol as it prepares a nest, mates, lays eggs, and raises its young. Winner of the 2014 Green Earth Book Award (Young Adult Nonfiction)

Okay for Now by Gary Schmidt. Grades 5-9. In this National Book Award finalist, a companion story to the Newbery Honor Book The Wednesday Wars, Doug struggles to be more than the “skinny thug” that some people think him to be. He finds an unlikely ally in Lil Spicer, and in the quest to save not an endangered bird but an endangered set of Audubon paintings of birds. Doug, who must endure an abusive father, the suspicions of a town, and the discovery that his brother was forever changed by his time in Vietnam, sees his feelings reflected in the stories of these beautiful birds.

Owls in the Family by Farley Mowat. Ages 8-12. Every child needs to have a pet. But what happens when your pet is an owl, and your owl is terrorizing the neighbourhood? In this book by the author of Never Cry Wolf, a young boy’s pet menagerie – which includes crows, magpies, gophers and a dog – grows out of control with the addition of two cantankerous pet owls. Warm, funny, suspenseful and filled with information about the Great Horned Owls.

The True Blue Scouts of Sugar Man Swamp by Kathi Appelt (Grades 3-7) is a rollicking tale of two raccoon brothers, a furry swamp creature, and a boy named Chap who lives at the edge of the Louisiana Bayou and is on a mission to save the swamp by locating the last remaining Ivory-Billed Woodpecker. Both comic and mythic, this book has at its center a true-life bird mystery: is the Ivory-Billed Woodpecker extinct? Or are the elusive birds still living?

The Wheel on the School by Meindert Dejong. Grades 3-6. Lina wonders why the storks no longer come to her town, the little Dutch fishing village of Shora. Her question sparks the gets the other children wondering, and sets in motion a chain of events that eventually leads the entire town to work together. Some say it’s a little slow for today’s reader, but this gem from the past won the Newbery Medal in 1955.

Wild Wings by Gill Lewis (grades 3-7) This “vividly imagined and well-written novel” (Booklist, starred review) could be a companion book to Washashore, as it follows the habits of the ospreys on the other side of  the Atlantic Ocean. It tells a gripping story about a boy from Scotland and a girl from West Africa who join together to save a migrating Osprey—and end up saving each other.

A field guide for kids

Backyard Birds by Jonathan Latimer, Karen Stray Nolting and Roger Tory Peterson. From the series Peterson Field Guides for Young Naturalists, Backyard Birds is a wonderful handbook for the novice birder. Whether your young bird-watcher is a curious casual observer or a more systematic collector of sightings, he or she will find this guide informative and easy to follow. Featuring illustrations by the famous naturalist Roger Tory Peterson, the book gives a simple, nonthreatening introduction to the Peterson system of bird identification (essentially a set of drawings and questions that help birders look for particular identifying features). There is enough information here to help readers identify 20 backyard birds common to most parts of the U.S. and Canada. (Scientific American)

And for the younger set:

Hooray for Birds! by Lucy Cousins

Here’s an exuberant book for the littles to get their imagination flowing. Kids can pretend to be birds and they learn about the sounds that different bird species make. This is a fun introduction to birding! [picture book, ages 2 and up]

Birds by Kevin Henkes and Laura Dronzek. Ages 4-8. This picture book by the author of Lilly’s Purple Plastic Purse links the variety of birds to concepts such as color, shape, size and number. “Henkes’ spare, direct words have a lyrical magic, while Dronzek’s bright acrylic paintings, in saturated primary color and heavy black outlines, reflect the text’s plain elegance while carrying an exuberant energy all their own.” (Booklist).

Are You My Mother? by P. D. Eastman. Ages 3 and Up.  This familiar, charming classic follows a confused baby bird who’s been separated from his mother as he asks cows, planes, and steam shovels the Big Question.

Please enter the Rafflecopter to win a signed copy of Washashore. Suzanne Goldsmith’s debut novel for ages 9-14, Washashore, is the winner of the 2014 Green Earth Book Award in the Young Adult Category. The free classroom guide, along with inserts aimed at individual grade levels 5 through 8, is available at Pagespring Publishing. You can find Suzanne on Facebook, Twitter or at her website. She’s hard at work on another book. p.s. Related Links: Free Bird Journal from Doodles and Jots Osprey Migration Books for Kids Birds of Florida Books for Kids British birds created with LEGO (and made an official set)

22 thoughts on “A Flock of Books about Birds”