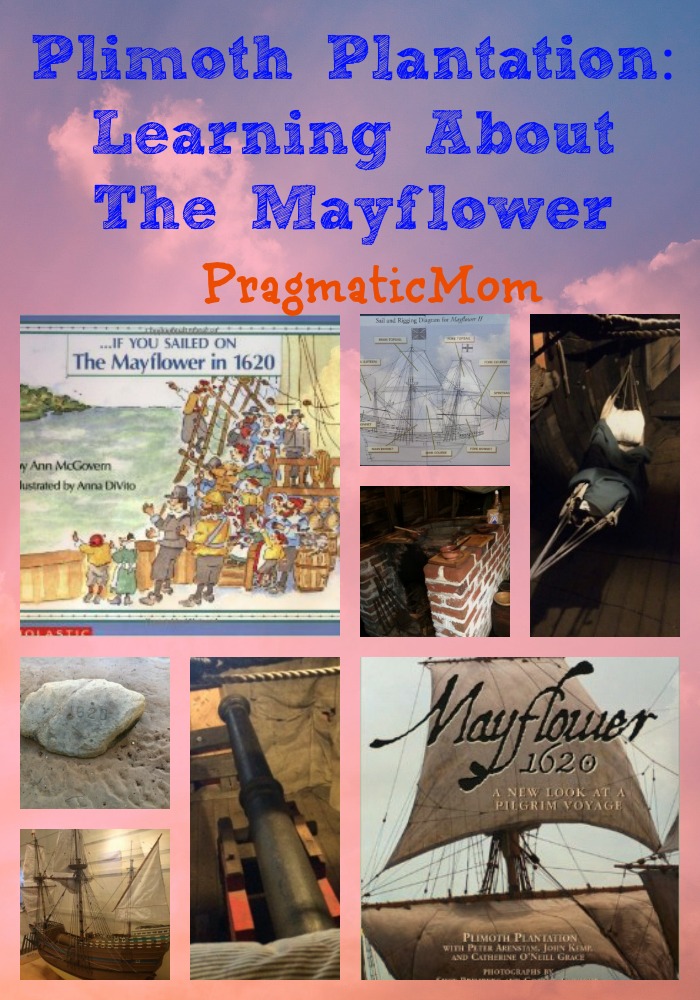 The first stop for the third grade field trip  to Plimoth Plantation on a wet and dreary day was the Mayflower II.  It’s a replica of the Mayflower ship that the Pilgrims sailed on. We also learned about the life for Pilgrims and Native Americans. Here’s a model boat version of the Mayflower at Plimoth Plantation.

On November 9, 1620, Mayflower’s crew first sighted land off Cape Cod near the Wampanoag village of Pamet. The next day, the ship attempted to travel south around Cape Cod to the colonists’ intended destination at the mouth of the Hudson River (present-day New York). Bad weather and dangerous shoals forced Mayflower’s master to turn back. The ship made landfall on November 11 at the tip of Cape Cod (present-day Provincetown). After exploring the Cape Cod area for several weeks, the colonists finally decided to settle at present-day Plymouth. from Plimoth Plantation The complex sails and rigging for the Mayflower. Actors portray the sailors on the Mayflower II

On Board the Mayflower II

We were able to go aboard the Mayflower II and explore the different decks and rooms. The passengers would have lived on board  anywhere from seven to nine months. This is a hammock where the sailors would have slept in.

There were other sleeping quarters as well: beds on the lower deck, bunks and rooms for the ship’s officers. These sleeping quarters were for passengers.

My son’s homework from the field trip was to visualize life aboard the Mayflower II. You can really get a sense of what life was like from visiting Plimoth Plantation in a way that books or videos just can’t convey! What my son learned from Plimoth Plantation and Mayflower II field trip.

The ship’s galley was essentially a fireplace that produced food for all 132 people! Hard to imagine! The officer’s quarters were more spacious. The ship was equipped with cannon.

Did they or didn’t they? This is the famous Plymouth rock, but only oral legend has recorded whether or not the Pilgrims actually stepped off onto this rock. Still, it’s preserved near the Mayflower II and it’s surprisingly small. Boys and girls will find out why the Pilgrims left England to live in America, what they took with them on board the Mayflower, and the hardships they endured. They’ll learn what the Mayflower Compact was, how the Pilgrims made a peace treaty with the Indians, and how these brave settlers managed to survive in their new land.

Ms McGovern has carefully researched the Pilgrims’ journey and their first year in America. Her portrayal is full of fascinating detail about their everyday life. Young readers will be intrigued to discover that Pilgrim boys and girls slept on corn husk mattresses they made themselves, and that most of the houses had only one chair — which was reserved for the man of the house! [advanced picture book, ages 7-10]

Mayflower 1620: A New Look at a Pilgrim Voyage by Plimoth Plantation

Plimoth Plantation and the National Geographic Society come together to tell the true story behind the legendary voyage of the Mayflower. A meticulously researched work, Mayflower 1620 offers children a compelling, fresh account of this much-told story. [advanced picture book, ages 8-12] 4th of July in Plymouth, Massachusetts

8 thoughts on “Plimoth Plantation: Learning About The Mayflower”