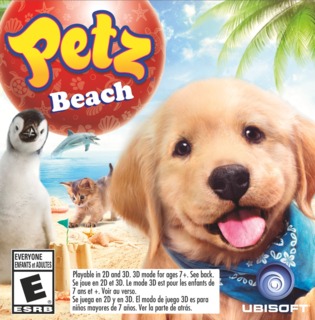 My son, now age 10, is the serious gamer. He goes from screen to screen if we are not careful: iPad, computer, TV, Wii, and 3DS. But lately, the 3DS is rarely used; he’s waiting for the newest Pokémon games to come out, so his device is untended and uncharged.

I had purchased other Petz games in the past for his older sisters when they were younger. PickyKidPix (now 12) and Grasshopper and Sensei (now 14) both have DSi that they don’t use at all. When Petz Beach arrived, I was surprised by how my kids pounced on it. Grasshopper and Sensei said, “Oh, can I please play that game! I love Petz.”

I was surprised that my high school freshman wanted to play video games; she’s plays a few games here and there but she’s not a serious gamer. I think the animals on the cover also caught her eye — Golden Retriever puppy, baby penguin and kitten! She loves the small furry creatures! Then my son saw it and asked to play it too. Shocking because this is not his typical type of video game. I would have assumed incorrectly that Petz is a video game for girls but it seems to appeal to boys too. My bad!

My 14-year-old played Petz Beach first. She noted that it was different from the Petz games of the past; this one was more goal oriented whereas the older games were focused around playing with your Petz. Petz Beach also incorporates some learning along the way with interesting factoids popping up about the animals as you play with them such as learning that the  Chihuahua is the world’s smallest dog. We wandered around a new town to explore that wanted to become a Petz destination playground achieved by happy Petz owners with Petz that played happily together. It had the same wandering feeling that made me feel like I was playing a Pokémon adventure … a safe adventure without rules that might appeal to boys. Our first stop was the pet adoption center and happily we had enough money in account (without having to earn it) to adopt any puppy we wanted. It was hard to choose but ended up with a German Shepard female puppy. She is unlike our real Golden Retriever dog at home in that our female Petz dog is really well-behaved. She doesn’t pull on the leash or jump up on people. She’s also very calm around other puppies that we met. There is a point to this wandering adventure and it’s that it’s a teachable moment in disguise thanks to a partnership with Encyclopaedia Britannica. As the player cares for his or her Petz and works to complete the mission, they will learn about animals, plants and insects without realizing it. There are more than 50 types of animals in the game from cats and dogs to aquatic mammals like dolphins and whales.

In short, Petz Countryside is the perfect 3DSi game — though we played it in 2D — for a child who desperately wants a pet. You know that child, don’t you? I have one too. She has made multiple and incessant requets for:  a Teacup Pig, a really fat squirrel, a rabbit, and a hypoallergenic kitten. I much prefer to let her have Petz Beach! Both might delight your kids as a holiday gift if they own a Nintendo 3DS device. The Petz games are wildly popular; more than 23 million units have been sold! Would you consider it for a holiday gift for the kids on your shopping list?

I was selected for this opportunity as a member of Clever Girls Collective and the content and opinions expressed here are all my own.

6 thoughts on “Petz Beach 3DS Game for Kids Who Want a Pet!”