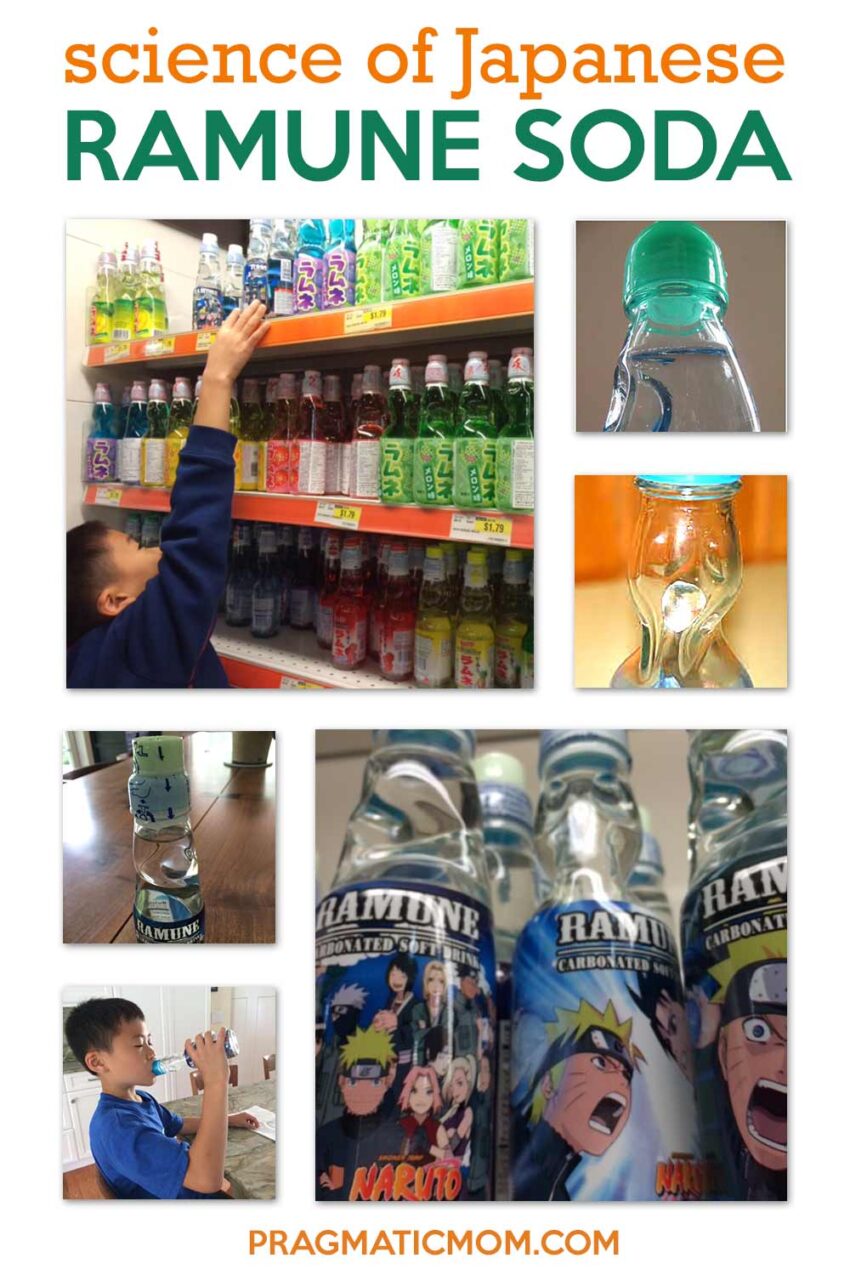 My kids discovered the Japanese Ramune soda recently. It was a discovery PickyKidPix made while eating at a Japanese restaurant with her friend. She was determined to hunt them down and we found them at our local Chinese grocery store. While the flavors of the Ramune sodas seem overly sweet and subtle to me, my kids seem to like them. I think it’s possibly the cool bottle design though. There is a marble in the neck that you have to push down into the bottle using a plastic piece. Sometimes it’s hard to push that sucker down! Once the marble is released into the soda, the carbonation gas is released and the soda fizzes right up. The marble stays inside the bottle, rattling around while you drink. I think my kids like that as well.

I thought the Japanese soda manufacturers invented this bottle but when I investigated, I found that this is actually technology invented by the Brits way back in 1872. While Codd bottles fell out of use in Europe, and never gained much traction in North America, they were crazy popular in Asia. From BoingBoing This video shows how the Ramune soda works. You can see us struggle to push the ball into the neck of the bottle! Ramune is widely known for the distinctive design of its bottle, often called Codd-neck bottles after the inventor, Hiram Codd. They are made of glass and sealed with a marble; the codd head is held in place by the pressure of the carbonation in the drink. To open the bottle, a device to push the marble inward is provided. The marble is pushed inside the neck of the bottle where it rattles around while drinking. The drinks are sometimes called “marble soda” outside of Japan. From Wikipedia

Alexander Cameron Sim (August 28, 1840 – November 28, 1900) was a Scottish-born pharmacist and entrepreneur active in Japan during the Meiji period. In 1884, Sim introduced a carbonated beverage based on lemonade to the Kobe foreign settlement. This drink, called “mabu soda” for “marble soda” due to the marbles placed in the bottle for opening action, soon became very popular with the local Japanese after it was advertised in the Tokyo Mainichi Newspaper as a preventative for cholera. The drink remains a popular soft drink, sold nationwide, under the name of ramune to this day. From Wikepedia

The Science of Japanese Ramune Soda for Kids

This is an interesting video series that shows 40 objects that have shaped the United Arab Emirites. One such object? The Codd-neck soda bottle by way of India back in the 1920’s because of the Brits!! It was the first form of soda in the Middle East! The Codd-neck bottle was everywhere!

How the Codd-neck Bottle Works

In 1872, British soft drink maker Hiram Codd of Camberwell, London, designed and patented a bottle designed specifically for carbonated drinks. The Codd-neck bottle was designed and manufactured to enclose a marble and a rubber washer/gasket in the neck.

The bottles were filled upside down, and pressure of the gas in the bottle forced the marble against the washer, sealing in the carbonation.

The bottle was pinched into a special shape to provide a chamber into which the marble was pushed to open the bottle. This prevented the marble from blocking the neck as the drink was poured. From Wikipedia If you don’t have an Asian supermarket near you but want to try Japanese Ramune soda, I found some online sources for you.

The Asian Food Grocer has a great assortment. There are also a lot of favors available at Amazon.

To examine any Ramune Soda more closely at Amazon, please click on image of Ramune. 23 thoughts on “Science of Japanese Ramune Soda for Kids”