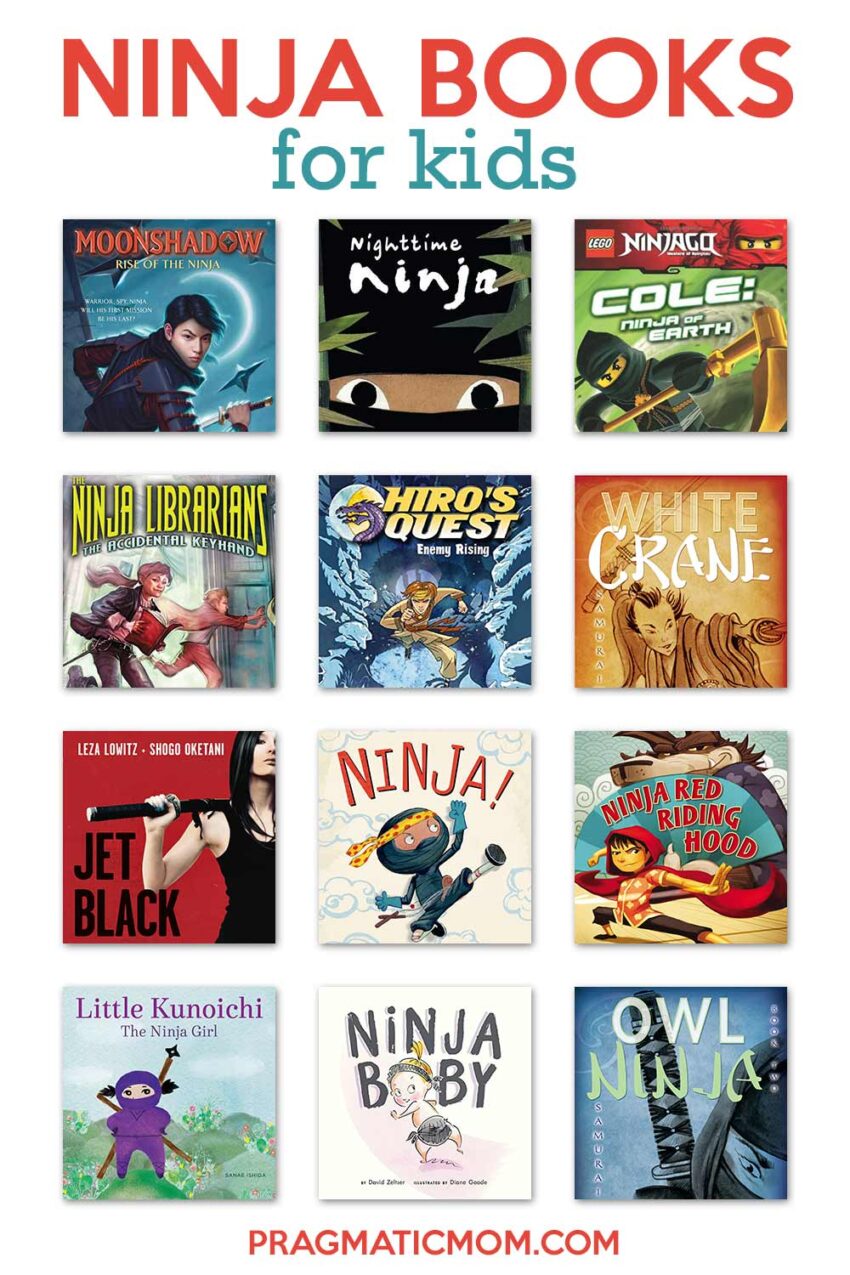 Inside: Does your child love everything ninja and martial arts? Take a look at our top selections of the best ninja books for kids!

My kids are one-quarter Japanese and they wish that their Japanese ancestry is steeped in the way of the ninja. It’s not. Their heritage is actually that of Daimyo, a feudal landowner/warlord,  and our ancestors are located about one hour outside of the city of Hiroshima.

I can see the appeal of the ninja over that of warlord, though. It’s that martial arts thing mixed with mystery and powers that border on mystical. Very appealing!

What is your favorite ninja book for kids? Please share!

Shogun: A Shogun was often one of the military governors of Japan from 1192 to 1867. It was typically a Daimyo who was able to unite the others in opposition of the emperor.

Daimyo:  The Daimyo were the powerful Feudal lords in pre-modern Japan who ruled most of the country from their vast, hereditary land holdings. Subordinate only to the shogun, daimyo were the most powerful feudal rulers from the 10th century to the middle 19th century in Japan. There were about 260 daimyo by the end of the feudal era.

Samurai: Samurai, usually referred to in Japanese as bushi, were the military nobility of medieval and early modern Japan who worked for a particular Daimyo. While the samurai numbered less than 10% of Japan’s population, their teachings can still be found today in both everyday life and in modern Japanese martial arts.

Ninja: A ninja or shinobi was a covert agent or mercenary in feudal Japan. The functions of the ninja included espionage, sabotage, infiltration, and assassination, and open combat in certain situations. Their covert methods of waging war contrasted the ninja with the samurai, who observed strict rules about honor and combat.

Kung Fu: Chinese martial arts, colloquially referred to as kung fu or gung fu and wushu, are a number of fighting styles that have developed over the centuries in China.

Shaolin Monastery: In addition to being the birthplace of Chan (Zen) Buddhism, Shaolin is the first temple that institutionalized kung fu. Because of its long famous association with Shaolin Kung Fu and development of many other Chinese martial arts, it is considered the cradle of kung fu.

10. Moonshadow: The Rise of the Ninja series by Simon Higgins

Set in Japan during the time of the Shogun rule, Moonshadow is an orphan adopted into the Grey Light Order, a secret ninja group loyal to the Shogun.

He must stop a hungry Daimyo (warlord) from developing a powerful new weapon from the west that would threaten the fragile peace finally established in Japan.

We used this for a family book activity! [chapter book, ages 8 and up]

Late at night, when all is quiet and everyone is asleep, a ninja creeps silently through the house in search of “treasure”. Ed Young’s wonderful illustration help to set up the surprise at the end. [picture book, ages 4 and up]

8. Beautiful Warrior: The Legend of the Nun’s Kung Fu by Emily Arnold McCully

This is my kind of martial arts book; a beautifully illustrated picture book by Emily Arnold McCully who never wrote a bad book. It’s a semi-autobiographical story about the Shaolin Temple monks who developed and train in Kung Fu martial arts as part of their spiritual studies.

A young woman joins their ranks, and she helps a young girl who is inspired to train in martial arts herself. Read this to your girls as a story of female empowerment! [picture book, ages 6 and up]

Think of this easy chapter book as a gateway drug for reading for boys who are also gamers. If they love Ninjago — it doesn’t matter what: the lego sets, the TV show, the graphic novel series — just hand them these books. There are only four but they really get boys reading.

I read them too and they aren’t half bad. [easy chapter book, ages 6 and up]

6. The Ninja Librarians: The Accidental Keyhand by Jen Swann Downey

Just a little story about your average sword-swinging, karate-chopping, crime-fighting ninja librarians. “[Downey] shows a rare gift for crafting scrambles so madcap that it’s hard to turn the pages fast enough to keep up.” —Kirkus Starred Review [chapter book, ages 8 and up]

If you have a physical disability, can you still train in the hand-to-hand combat martial arts of a ninja or a samurai warrior?

White Crane or Niya Moto has only one leg and the samurai school — Cockroack Ryu — he ends up joining all have a physical disability that makes them the underdogs of the Samurai Trainee Games which the Dragons also seem to win.

Those Dragons are bullies of the worst kind. Do the ragtag Cockroaches have a chance? [chapter book, ages 8 and up]

3.  Jet Black and the Ninja Wind by Shogo Oketani and Leza Lowitz

This was my YA pick for the Read Around the World series:

Jet Black isn’t sure why she wakes up in the middle of the night to train mysteriously in the ways of the ninja for as long as she can remember. Her training includes mastering how to walk on wet tissue paper without tearing it or making a sound and other such impossible tasks.

Jet never really understood the purpose of her training, but when her mother dies, she is sent on a mission to save a secret family treasure back in Japan.

There are bad guys out to get her and her new-found Japanese family (also well-trained as ninjas). But why is the person who is responsible for capturing her so alluring? This YA action adventure love story is non-stop action as Jet fights to save a sacred mountain in Japan. [young adult, ages 10 and up]

I picked Ninja! as my Picture Book of the Day: A little boy pretends to be a ninja, and using common household items such as a jump rope, kitchen rubber gloves, a billiard stick and a paddle with ball toy, attempts his ultimate heist! Will he go undetected? [picture book, ages 4 and up]

There is nothing more fun, in my mind, than a fractured fairy tale … except for a fractured NINJA fairy tale! And this one even rhymes in an unusual but run to read A BB CC pattern! [picture book, ages 4 and up]

Little Kunoichi trains like crazy at a secret school to learn the ways of the ninja. She’s a ninja-in-training. Her friend, Chibi Samurai, goes to a special school too. Some of the skills they must master are the same such as fitness, strategy, and mindfulness. Use this picture book to learn what ninjas were really like.

The charming watercolor illustrations include references to Japanese culture and folk tales. [picture book, ages 4 and up]

Use this hilarious picture book for any child expecting a new sibling, particularly for a girl preparing for new baby brother! Nina was a ninja baby from the start, wanting to do everything by herself and excellent at advanced infiltration.

When her parents bring home a Kung Fu Master little brother, she’s outmatched … until she learns his secret. And now that they are cross training, their parents better watch out!  [picture book, ages 4 and up]

One of the last remaining Japanese swordsmiths uses all of his skills and knowledge to make Koto, a mythical samurai sword dating back to 794-1333 AD. From Etsy.tv, Korehira Watanabe is The Swordmaker.