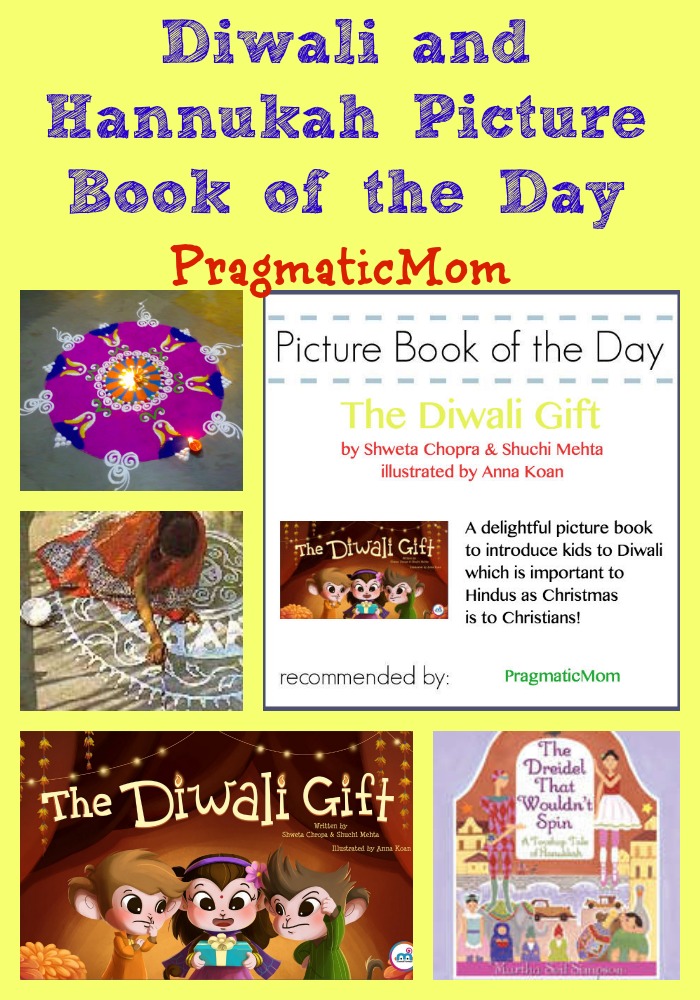 My friend Isra who blogs at The Frugalette told me a few years ago how few Diwali books there are, so when The Diwali Gift floated across my email, I thought it would be nice to learn more about this Hindu holiday. My only impression of Diwali was that it was a festival of lights and that it involved feasting. There is much more to it I learned!

Diwali also known as the “festival of lights“, is an ancient Hindu festival celebrated in autumn every year. The festival spiritually signifies the victory of light over darkness, knowledge over ignorance, good over evil, and hope over despair. The festival preparations and rituals typically extend over a five-day period, but the main festival night of Diwali coincides with the darkest, new moon night of the Hindu Lunisolar month Kartik. In the Gregorian calendar, Diwali night falls between mid-October and mid-November. From Wikipedia

My takeaway is that it is a spiritual harvest festival. But I also learned from National Geographic Kids that Diwali is as important to Hindus as the Christmas holiday is to Christians! It also explains the 5 days of Diwali:

Day 1:  Housewives consider it auspicious to spring clean the home and shop for gold or kitchen utensils.

Day 3: This is the main day of the festival when families gather together for Lakshmi puja, a prayer to Goddess Lakshmi followed by mouth-watering feasts and firework festivities.

Day 4: This is the first day of the new year when friends and relatives visit with gifts and best wishes for the season.

Day 5: On the last day of Diwali, brothers visit their married sisters who welcome them with love and a lavish meal.

The Diwali Gift by Shweta Chopra and Shuchi Mehta, illustrated by Anna Koan

The excitement of Diwali to children (as Christmas is to Christians) is palpable in The Diwali Gift. Three young monkeys get a package from their grandmother — Dadima — for Diwali to share and they try to guess what it is. Is it sparklers to light up on Diwali night? Is it bangles to go with a new lehenga (long skirt)? It is a diya (clay lamp) to decorate the rangoli (or alpanas; a traditional Indian art from using colored rice, sand or flower petals)?

You can use this picture book to introduce Diwali to your kids either by simply reading the story, or diving into the glossary in the back to learn more. [picture book, ages 2 and up] Diwali with its multiple days of celebration reminds me of Hannukah, so I added this charming “new-but-feels -like-an -lden folktale” to my Picture Book of the Day recommendations.

In the classroom, Harini and her friends share with their class how they celebrate Diwali. She finds out that even though five of her friends also celebrate this holiday, each does it in a different way. Harini tells her class at circle time about lighting diyas, eating sweets, and hearing the story of Ram, Sita and Lakshman. Her family is Hindu. Dhimen is Buddhist celebrates Diwali with the story of Ashoka. Urvi’s family tells the story of Prince Mahavira; her family is Jain. Amrit is Sikh and he has yet another Diwali story to share about a strong warrior named Guru Hargobind.

Learn about the similarities in world religions through Diwali, the Festival of Lights, in this delightful multicultural picture book. [picture book, ages 4 and up]

The Dreidel That Wouldn’t Spin: A Toyshop Tale of Hannukah by Martha Seif Simpson, illustrated by Durga Yael Berhard

The toy shop had the most beautiful dreidel and it was snapped up by a wealthy man and his daughter who got whatever she demanded. They returned it the next day, saying that it was defective. A woman and her spoiled son bought it next and they found that it didn’t spin for them either. The shopkeeper reluctantly let a family with patched clothes into his shop. Their son touched nothing but noted the wonders of each special toy. The shopkeeper was touched and gifted the dreidel to the boy. When he spun the dreidel, not only did it spin beautifully — longer than any dreidel they had ever seen — but the words on the dreidel transformed. It was miracle of Hannukah: wonders still occur for those who are ready for them. [picture book, ages 4 and up]

Hannukah starts December 16 and ends December 24, 2014. To learn more about Jewish holidays and books to teach all kids about them, Books My Kids Read has a great post on books she uses with her kids to teach the true meaning of the high holidays.

p.s. I have a post on Bangladesh with Alpanas for celebrating Diwali here. 12 thoughts on “Diwali and Hannukah Picture Book of the Day”