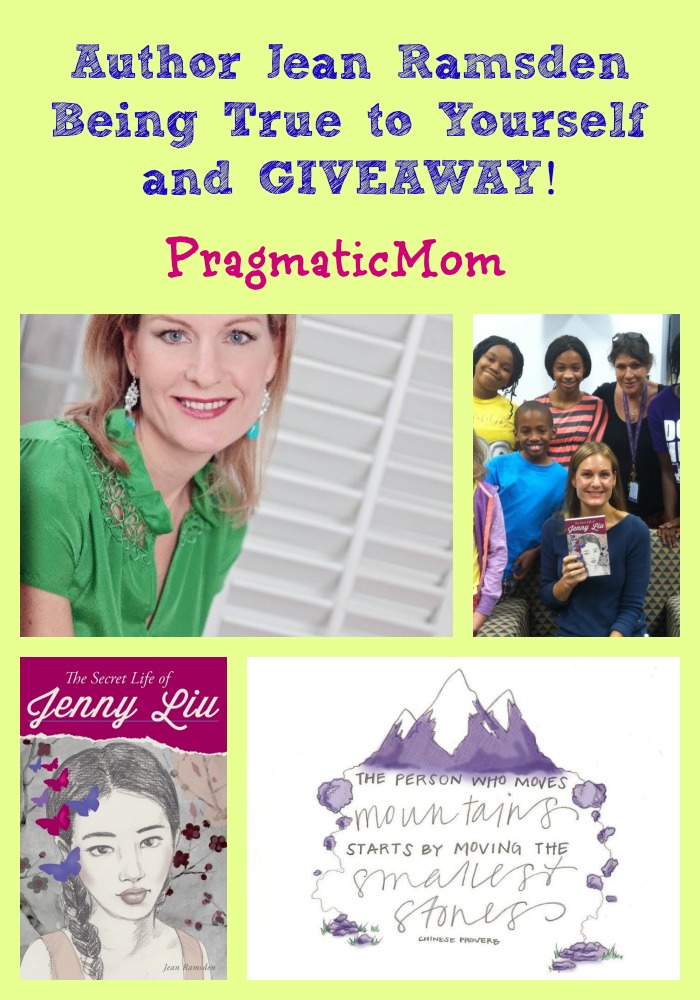 Please welcome author Jean Ramsden who is writing today on the importance of being true to yourself. She is also giving away 3 signed copies of her book! Please see the Rafflecopter at the end of the post to win.

Jenny Liu is on the move again. Except this time, she hasn’t landed at yet another Chinese-American School in California but at a public school in South Carolina. Shy, artistic Jenny wonders if she will ever figure out how to fit in amongst rowdy fifth graders and eccentric teachers with hard-to-understand southern accents. To make matters worse, the class thinks she is super smart and her piano teacher thinks she is a musical genius. With school activities that test her intelligence and an upcoming piano recital, it’s getting harder for Jenny to do what’s right—to tell the truth—especially since she knows that The Real Jenny Liu would be even more of an outsider. Or would she? [chapter book, ages 9 and up]

I sit on the board of a youth at risk organization and we’re always looking for age appropriate books to stock our community center. What I love about this book is that the main character comes from a diverse background. It’s so rare to find that, particularly in stories for youth. The Secret Life of Jenny Liu transported me back to my elementary school days. I essentially blew through the last 200 or so pages because I couldn’t wait to see what Jenny had up her sleeves with her classmates. This book begs for a series. I highly recommend for your older elementary school aged children. They will love it! Review from Germonique Ulmer My middle grade book, The Secret Life of Jenny Liu, is about the importance of being true. The main character, Jenny, excels at discovering the truth about her teachers and classmates, but she struggles with being true to herself. When Jenny moves from a Chinese-American School in California to a public school in South Carolina, her internal conflict intensifies. By the end of the book, Jenny finds strength in the things that make her unique and she realizes that The Real Jenny Liu is “just right.”

It is the quiet character who saves the day in my picture book, It’s Too Loud in Here! I wanted to continue this theme—quiet is powerful—in a middle grade book. I liked the idea of a quiet girl who secretly solves problems because she wants to help others. An unexpected heroine.

In The Secret Life of Jenny Liu, Jenny listens, observes and notices the details that others don’t. Through small acts of kindness, she puts an end to the classroom graffiti before anyone gets suspended, she gets the fifth-grade teachers to admit that they are sweet on each other and she helps the class soccer star play at the Fifth-Grade Soccer Game. Ultimately, Jenny is true to herself. She sees her quiet nature not as a flaw, but as a strength. The Secret Life of Jenny Liu begins with this Chinese proverb.

Shortly after I outlined the story, I received a Chinese New Year letter from friends in Hong Kong. Immediately, I began to envision the story’s main character as being Chinese. I liked the idea of a quiet Chinese girl who secretly solves problems because she wants to help others. A really unexpected heroine and one we don’t often see in children’s books.

During book readings, I ask the kids: What does it mean to be true to yourself?

Here’s what they tell me: I talked to a Young Writers Group about “The Secret Life of Jenny Liu” at one of Charlotte’s public libraries (@cmlibrary). Inevitably, the kids turn my question around and ask: Are the book’s events real or made up? As an author, this means: Are you writing what you know to be true?

Here’s what I tell them:

But writing what you know is more than just including personal events in your story. The cumulation of your experiences shape how you see the world and influence your writing. As a result of my experiences, I think it’s important to see and to talk about physical differences—what someone looks like—but to recognize that this is only one way to identify yourself and others. Of equal importance is noticing internal differences. I hope that readers of The Secret Life of Jenny Liu are inspired to do both.

Thank you for having me as a guest, Pragmatic Mom! You are a valuable force in parenting, education and reading. (And, I LOVE that your Rule #3 is to help your kids to self-actualize.) Jean Ramsden is a writer, producer and educational consultant. She graduated from Cornell University and Harvard University, and lives in North Carolina with her husband and four children. Connect: @jean_ramsden

GIVEAWAY: Three Winners will get signed copies of The Secret Life of Jenny Liu!

To win one of three signed copies of The Secret Life of Jenny Liu by Jean Ramsden, please fill out the Rafflecopter below. 2 thoughts on “Author Jean Ramsden Being True to Yourself and GIVEAWAY!”