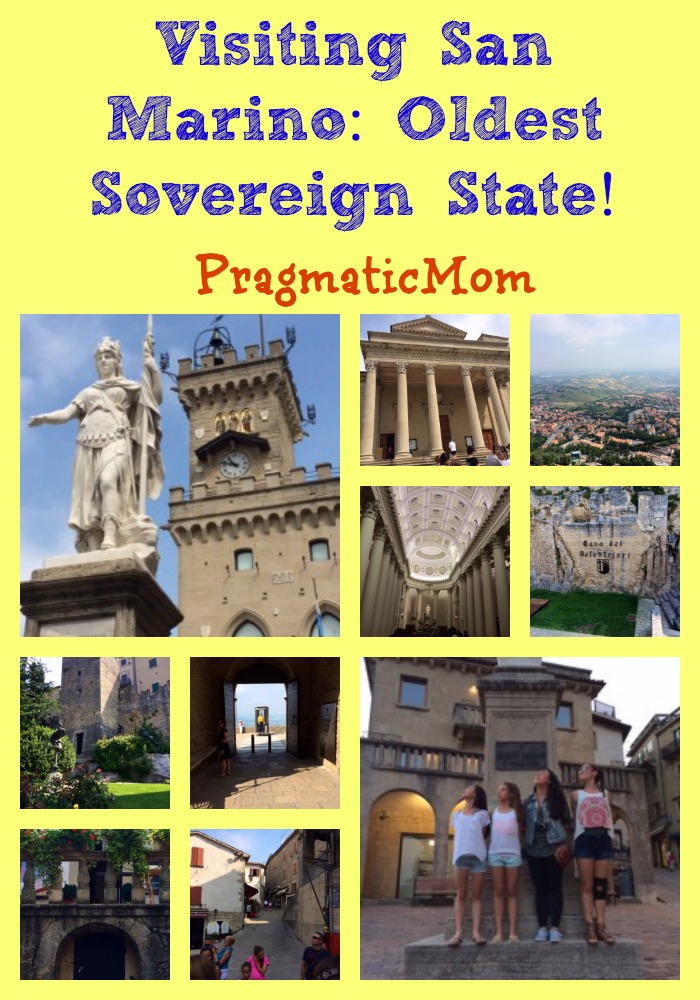 PickyKidPix desperately wanted to join her indoor soccer team on  “trip of a lifetime” playing soccer in Italy with USA Premier Soccer so I used my hoarded stash of money from blogging to take her and Grasshopper and Sensei on a 10 day tour that covered: I had never heard of San Marino before, but as the trip drew nearer, I learned that it hosts a huge international soccer tournament every year that we were NOT participating in. We were, however, staying there three nights and playing one game there against a local girls team.

It turns out that I wasn’t the only one who had never heard of San Marino. It’s actually a country; albeit a tiny one.

The Republic of San Marino claims to be the oldest surviving sovereign state in the word. It’s surrounded by Italy,  situated on the Italian Peninsula on the north-eastern side of the Apennine Mountains. Its size is just over 61 km2 (24 sq mi) with an estimated population of over 30,000 and was founded on 3 September 301.

Population 30,000?! That’s the same size as my hometown in Seal Beach, California!

We had a guided tour and I asked how San Marino was able to survive as a principality all these years. Laying low and diplomacy was the answer. Our guide told us that no one knew San Marino existed for centuries and once they were discovered, they stayed neutral as much as possible to avoid conflict.

Up atop a mountain, the city of San Marino is a walled fortress where entrance is granted through this guarded doorway. Once you enter the city, you climb, climb, climb along steep winding streets burgeoning with stores, restaurants, museums and public buildings. It’s alike a quaint shopping mall. My girls were entranced! Bonus points for no sales tax! We opted to pass on the Museo de Tortue (a museum of torture) that is right near the entrance. Our friends went in and I begged her not to tell me about the different torture devices as this kind of imagery gives me nightmares. Still, she could not help herself and described a device where you are in a perpetual uncomfortable chair pose. That is not my kind of yoga! San Marino was founded by a stonecutter, Marinus of Arbe, part of a monastic community who left a Roman colony when the emperor decreed that nearby Rimini’s walls had to be rebuilt after being destroyed by pirates. This site was the former quarry from which the walls and buildings were constructed. Now it is a public space for performances; the most famous is a cross bow competition! For a small space, San Marino is full of beautiful public art. My daughters and their friends enjoyed posing in front of each statue. The town square here centers around The Palazzo Pubblico, the official government building. There is a changing of the guard just like at Buckingham Palace! We spotted the president entering via black diplomat car. Right now, times are tough in San Marino, according to some local boys we met. Unemployment rates are high and the people are frustrated with government. There are many towers and battlements to explore in San Marino if you are willing to hike up a very steep street with a spectacular view of a castle as your reward. My girls opted instead for more shopping. Our tour guide took us to this beautiful church where you can light a candle in remembrance of a loved one. I hope you enjoyed this tour of San Marino. It was one of our favorite cities on our Italy trip and I hope that we will be able to go back someday with the rest of our family.