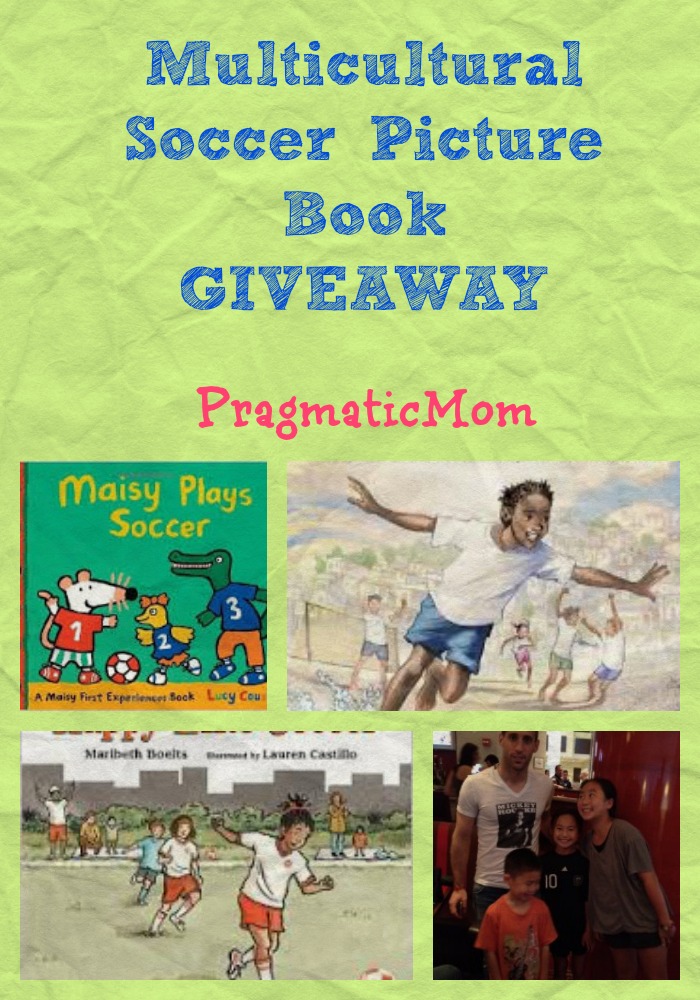 PickyKidPix went to Italy this summer to play soccer with her indoor team and we were able to watch her play during the last few weeks of the World Cup. What a great time to be in Europe with soccer fans!

Because of our great love for Lionel Messi, we root for Argentina and that was a great pick this World Cup! My family is obsessed with Lionel Messi. We root for FC Barcelona, we visited Barcelona to see Camp Noa, and we went to New Jersey to watch a “friendly” Argentina vs. Brazil. When we went to the Argentina vs Brazil friendly, we weren’t able to meet Lionel Messi but we did snap a photo with Pablo Zabaleta who was a clutch player during the World Cup! When Candlewick Press offered me some soccer picture books, I was too slow to blog on them in time for the World Cup but I offer them up now to fill that void that the World Cup has left now that it’s ended.

How about you? Did you watch the World Cup? Who did you root for?

Mina vs. the Monsoon by Rukhsanna Guidroz, illustrated by Debasmita Dasgupta

This isn’t a picture book about the monsoon rains. It’s really a story about a young girl who loves soccer. There is a surprise about who else likes soccer that you can discover drinking chai, eating samosas, and, of course, playing soccer! [picture book, ages 4 and up]

G is for Golazo: The Ultimate Soccer Alphabet by James Littlejohn, illustrated by Matthew Shipley

Learn the alphabet in this multicultural picture book celebrating all things soccer. Female players include Mia Hamm, Alex Morgan, and Marta in this all-star line up of soccer legends from past and present. [picture book, ages 3 and up]

The first children’s book my husband ever bought our kids was Maisy’s ABC when I was pregnant with our oldest. It’s become one of our favorite series of all time! This is a new series (and I would know because, at one point, we owned every single one!) about First Experiences. It’s perfect for preschoolers to introduce them to soccer as Maisy and her friends play soccer. Win or lose, they have a lot of fun and it’s hard to score on a big goalkeeper like Eddie!! [picture book, ages 1 and up]

This picture book should have been the 2014 World Cup designated picture book. Set in Brazil, it’s an homage to all the children who work for a living but manage to rise from poverty through the game of soccer. Paulo Marcelo Feliciano works on a fishing boat by day and his captain also coaches their pick up team. They play to win but when one player gets hurt, will Paulo’s little sister finally be able to join the boys? [picture book, ages 4 and up]

Happy Like Soccer by Maribeth Boelts, illustrated by Lauren Castillo

Sierra lives with her aunt in a small apartment in the inner city. She’s made an elite soccer team that plays far from her neighborhood. The other players’ parents are able to cheer for their kids but Sierra’s aunt has to work. Saturdays are busy days at the restaurant. For the last game, her aunt’s boss offers her a different shift so she can attend her niece’s game but it’s rained out. Sierra figures out a solution but is she brave enough to ask her coach [picture book, ages 4 and up]

Carmel is mixed-race so it’s hard for her to decide which country to support for the World Cup. When she can’t find a jersey that represents two countries, she decides to make one herself. The mixing of cultures goes beyond football jerseys in her house! Her father makes a feast that celebrates Nigerian and English culture. Her teacher appreciates her creativity and Carmel wins the World Cup prize at school. [picture book, ages 6 and up]

This is an amazing flip book rendition of the highlights from the 2014 World Cup. Bend it like Beckham? Ever wonder how soccer players bend the ball? Here’s the physics behind bending the ball!

To enter the 3 book giveaway, please fill out the Rafflecopter below.