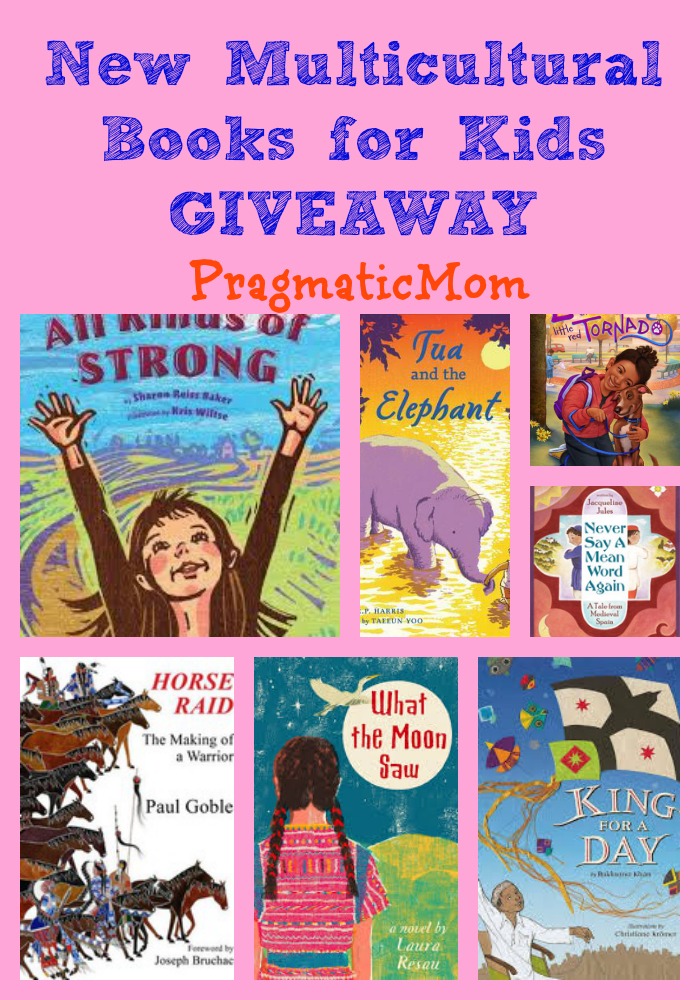 I wanted to highlight some great picture books and chapter books with diversity themes that have come my way. What multicultural books are you and your kids enjoying? Please share!

King for a Day by Rukhsana Khan

I love this book for covering so much territory with just one story. Malik is looking forward to Basant, held on the fifth day of lunar month of Magha (in late January or early February) marking the start of spring. It’s a time to fly kites as well as a religious festival. Malik has built his own kite and he can be king for a day if he can defeat all the other kite fighters, including the bully’s next door. Malik just so happens to be in a wheelchair flying his kite on the roof of his house. The bully loses but Malik can see him below on the street trying to take a kite away from a girl. Can Malik do something about that? [picture book, ages 6 and up]

All Kinds of Strong by Sharon Reiss Baker, illustrated by Kris Wiltse

Sadie Rose is small for her age and often sickly. Her neighbors worry that she isn’t strong enough for the physical demands of helping on her family’s farm but her neighbor Mrs. Mindel reminds them that there are all kinds of strong. Sadie Rose remembers everything and comes up with solutions to problems that no one else has thought of. When Mrs. Mindel’s house burns down — her parlor is also the shul or synogogue — Sadie Rose has an idea of what to do.

I especially love the woodblock illustrations that illuminate this story of Jewish chicken and dairy farmers in Eastern Conneticut. [picture book, ages 6 and up]

This story was inspired by the real life actions of the Jewish poet Samuael Ha-Nagid, the vizier in 11th century Muslim Spain. In a world full of conflict, the story of two boys — one Jewish, the other Muslim — feels particularly relevant. How do you punish an enemy? How do you make sure your enemy never says a mean word again? I think the solution that young Samuel came up with would work today as well as it did in the 11th century. [picture book, ages 4 and up]

Horse Raid: The Making of a Warrior by Paul Goble

American Indian traditions of raiding other tribes for horses were viewed as honorable pursuit by all the native nations of the Great Plains. It was not “stealing” in the European sense, but something done to earn honor …

In fact, it was common for men who were successful in taking away horses from another tribe to then give them many of those same horses to one’s own tribal members who needed them.

Caldecott awarded author Paul Goble tells this story through the eyes of a fourteen-year-old boy. His mother — like all mothers — does not want him in the dangerous raiding party so he sneaks away with his friend to join his father. It’s a coming of age story that includes themes of honor, courage and generosity. [advanced picture book, ages 7 and up]

What the Moon Saw by Laura Resau

Fourteen year old Clara Luna doesn’t know too much about her father’s past; only that he came to America from Mexico as an undocumented worker, married her American mom and built a successful life for himself and their family. There’s a void in not knowing so when she gets a letter from her grandparents inviting her to visit them in a remote part of Mexico, she agrees to go. As Clara connects with her relatives, the stories that come out show her the ties that bind and the sacrifices that must be made to pursue a better life.

I loved this middle grade novel that shows the conflicts and hardships that undocumented workers go through, from a different point of view; that of their Americanized daughter. This book reminds of The Joy Luck Club because both books bring out stories in a rich tapestry of where the past and present collide. [chapter book, ages 8 and up]

Tua and the Elephant by R. P. Harris, illustrated by Taeeun Yoo

This gentle easy chapter book was inspired by the plight of the Asian elephants living in a refuge park in Chiang Mai, Thailand. The authors have created a plucky young girl, Tua, who is moved to save a young elephant from its cruel handlers. In order to save this elephant, she must traverse the night markets of Chiang Mai, hide out in a Buddhist temple, and race to find a sanctuary where it will be safe. Though the bad guys are bad, there is a cartoon element to their antics and they are never scary, so I think this book would work well for ages 7 and up. [easy chapter book, ages 7 and up]

Latasha and the Little Red Tornado by Michael Scotto, illustrated by Evette Gabriel

Latasha’s mom had finally transitioned her career from motel cleaning lady to nursing aide. This is great news except that Latasha now needs more time being babysat by their landlord, Mrs. Okocho. The problem isn’t just Mrs. Okocho’s cooking, it’s that Latasha’s puppy, Ella Fitzgerald, has a lot of energy and gets into trouble if she’s not exhausted. Can Latasha keep her puppy out of trouble? [chapter book, ages 9 and up]

Please enter the Rafflecopter to win Latasha and the Little Red Tornado by Michael Scotto, illustrated by Evette Gabriel