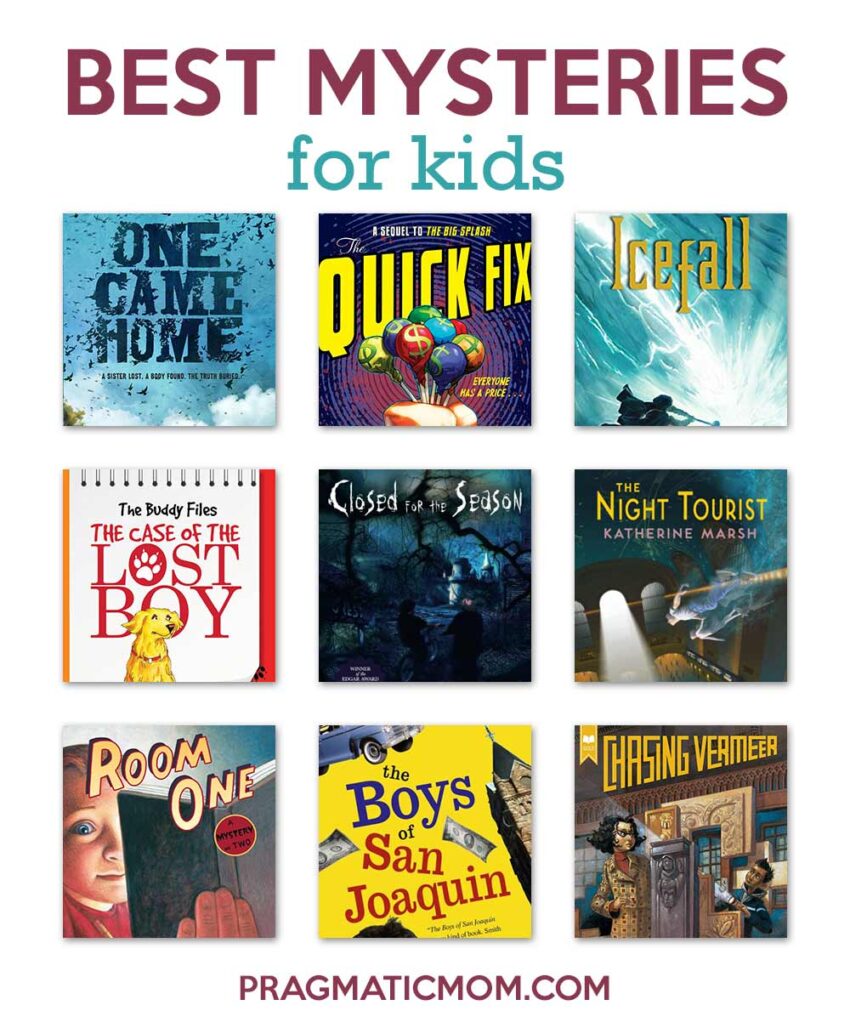 Check out the best mysteries for kids — must-read chapter books your child can’t put down. Perfect for suspense and thrills!

The “Edgars” are The Edgar Allan Poe Awards, named after Edgar Allan Poe, and presented every year by the Mystery Writers of America. The awards covers many genres, including mystery fiction, non-fiction, television, film, and theater.

My son is reading 5 books for summer homework assigned by his upcoming 4th grade teachers. He is supposed to read a variety of genres but I forgot about mysteries, hence this list! How about you? Are your kids reading and enjoying mysteries? What is their favorite? Thanks for sharing!

In the town of Placid, Wisconsin, in 1871, Georgie Burkhardt is known for two things: her uncanny aim with a rifle and her habit of speaking her mind plainly.

But Georgie blurts out something she shouldn’t. Her older sister Agatha flees, running off with a pack of “pigeoners” trailing the passenger pigeon migration. And when the sheriff returns with an unidentifiable body—wearing Agatha’s ball gown—everyone assumes the worst. Except Georgie.

Refusing to believe the facts that are laid down (and coffined) before her, Georgie sets out on a journey to find her sister. She will track every last clue and shred of evidence to bring Agatha home.

Yet even with determination and her single-shot, Georgie is not prepared for what she faces on the western frontier. [chapter book, ages 10 and up]

Junior high detective Matt Stevens is back on the case, bringing us another hilarious middle school noir. When the star of the basketball team is blackmailed, it’s up to Matt to figure out who’s behind the scheme.

Is it eighth-grade crime lord Vinny “Mr. Biggs” Biggio? He has made his name peddling forged hall passes and leading a crew of social assassins.

Or is it his lieutenant and Matt’s former best friend, Kevin? Or a pair of scheming twins who sell Pixy Stix to sugar-addicted classmates? One thing’s for sure: There won’t be a quick fix for the trouble at this middle school. [young adult, ages 12 and up]

Solveig is trapped in a hidden fortress tucked between towering mountains and frozen sea. Along with her brother (the crown price), their older sister, and an army of restless warriors, she awaits news of her father’s victory at battle.

But as winter stretches on, and the unending ice refuses to break, terrible acts of treachery soon make it clear that a traitor lurks in their midst. Solveig must also embark on a journey to find her own path.

Yet, a malevolent air begins to seep through the fortress walls, as a smothering claustrophobia slowly turns these prisoners of winter against one another.

Those charged with protecting the king’s children are all suspect, and the siblings must choose their allies wisely. But who can be trusted so far from their father’s watchful eye? Can Solveig survive the long winter months and expose the traitor before he manages to destroy a kingdom? [chapter book, ages 8 and up]

The Buddy Files: The Case of the Lost Boy by Dori Hillestad Butler (2011)

King has a very big mystery to solve. His family is missing, and he’s been put in the P-O-U-N-D. Why doesn’t his beloved human (Kayla) come to get him? When King is adopted by Connor and his mom, things get more confusing. The new family calls him Buddy!

And just as Connor and Buddy start to get acquainted, Connor disappears! Buddy (aka King) has big problems to solve. But with some help from his friend Mouse (a very large dog) and the mysterious cat with no name, he shows what a smart, brave dog can do.

Mystery fans and dog lovers will be swept up in Dori Hillestad Butler’s funny, satisfying story… and left eager for Buddy’s next adventure. [easy chapter book, ages 6 and up]

Closed for the Season by Mary Downing Hahn (2010)

Thirteen-year-old boys Arthur and Logan set out to solve the mystery of a murder that took place some years ago in the old house Logan’s family has just moved into.

The boys’ quest takes them to the highest and lowest levels of society in their small Maryland town. Eventually they end up in a derelict amusement park that is supposedly closed for the season. [middle grade, ages 10 and up]

When Jason’s grandmother dies, he’s sent down to her home in Florida to help his father clean out her things. At first, he gripes about spending his summer miles away from his best friend, doing chores, and sweating in the Florida heat. But he soon discovers a mystery surrounding his grandmother’s murky past.

An old, yellowed postcard. A creepy phone call with a raspy voice at the other end asking, “So how smart are you?” An entourage of freakish funeral-goers. A bizarre magazine story. All contain clues that will send him on a thrilling journey to uncover family secrets. [middle grade, ages 9 and up]

The Night Tourist by Katherine Marsh (2008)

Jack Perdu, a shy, ninth grade classics prodigy lives with father on the Yale University campus. Smart and introverted, Jack spends most of his time alone, his nose buried in a book. But when Jack suffers a near fatal accident, his life is forever changed.

His father sends him to a mysterious doctor in New York City–a place Jack hasn’t been since his mother died there eight years ago. While in the city, Jack meets Euri, a young girl who offers to show him the secrets of Grand Central Station.

Here, Jack discovers New York’s Underworld, a place where those who died in the city reside until they are ready to move on. This, Jack believes, is a chance to see his mother again. But as secrets about Euri’s past are revealed, so are the true reasons for Jack’s visit to the Underworld.  [middle grade, ages 10 and up]

Ted Hammond loves a good mystery, and in the spring of his fifth-grade year, he’s working on a big one. How can his school in the little town of Plattsford stay open next year if there are going to be only five students? Out here on the Great Plains in western Nebraska, everyone understands that if you lose the school, you lose the town.

But the mystery that has Ted’s full attention at the moment is about that face. The face he sees in the upper window of the Andersons’ house as he rides past on his paper route. The Andersons moved away two years ago, and their old farmhouse is empty, boarded up tight. At least it’s supposed to be.

A shrinking school in a dying town. A face in the window of an empty house. At first these facts don’t seem to be related. But Ted Hammond learns that in a very small town, there’s no such thing as an isolated event. And the solution of one mystery is often the beginning of another. [middle grade, ages 8 and up]

Paolo calls Rufus “a Mack truck with no one driving.” Rufus is the O’Neil family dog, and he shows up one morning with part of a twenty-dollar bill in his teeth.

Twelve-year-old Paolo figures there must be more where that bill came from. Since his cousin Billy needs to repair a bent wheel on his bike, there’s a reason for looking.

Soon Paolo, his brother Georgie, and Billy end up in the monsignor’s garden behind the Cathedral of San Joaquin. But it’s not exactly treasure they find—it’s a hand that shoots out of the undergrowth to grab Paolo’s neck.

The search for the stash leads the boys — sometimes scared spitless — on many a byway around Orange Grove City, California, in the summer of 1951. And onto the byway of conscience. [middle grade, ages 9 and up]

This bewitching first novel is a puzzle, wrapped in a mystery, disguised as an adventure, and delivered as a work of art.

When a book of unexplained occurrences brings Petra and Calder together, strange things start to happen. An eccentric old woman seeks their company, and an invaluable Vermeer painting disappears.

Before they know it, the two find themselves at the center of an international art scandal, where no one is spared from suspicion. Petra and Calder are drawn into a mysterious labyrinth. They must use their powers of intuition, problem-solving skills, and knowledge of Vermeer.

Can they decipher a crime that has stumped even the FBI? [middle grade, ages 8 and up] 20 thoughts on “Best Mysteries for Kids”