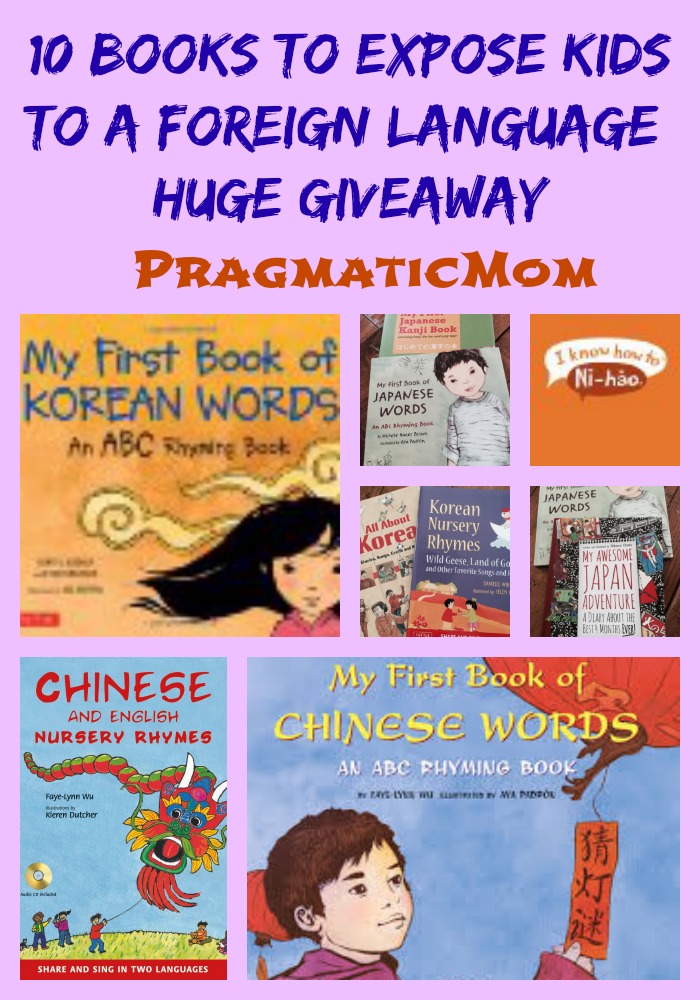 The summer is a great time to expose kids to a foreign language. I received a huge box of books from Tuttle Publishing that are perfect for this and I am giving most of them away. Please see the Rafflecopter giveaway below.

What languages would your kids be interested in? Are you using any great sites, books or videos? Please share!

Ah, Mandarin Chinese … such a struggle to learn! With four tones making one sound mean four different words, it’s a different way to view a language. The writing system is also challenging. No alphabet (though Pinyin is used to for pronunciation). Instead, one character for every word. My kids are trying to learn Chinese with varying degrees of resistance.

Still, just exposing them to a new way of looking at a language is helpful. And songs, games and picture books can perhaps get them interested in exploring Mandarin.

Is Chinese the language of the future? Probably. It certainly won’t hurt to dip a toe in!

We love the Follow Jade DVD series. Sadly, there are just two but here is a free clip.

I Know How to Ni-hao by Susanne Aspley, illustrated by Lucas Richards

This illustrated bi-lingual picture book still manages to pack in a lot of vocabulary words but also includes rhyming sentences. It includes with items related to school, animals, numbers, household objects, and even outer space. I love how it includes a few pages of games in the back and also a bi-lingual glossary. It’s the perfect dose of foreign language for a summer! Combine it with a video to master correct pronunciation. [picture book, for ages 2 and up]

A perfect first book introduction to Chinese for any age. It combines Chinese culture with Chinese characters along with rhyming English text. There is a Chinese word in each rhyme written out in English. The Chinese character is also on the page. I think you will still have trouble pronouncing the Chinese word correctly unless you speak Chinese though. [picture book, ages 2 and up]

The nursery rhymes are bi-lingual and the audio CD makes it easy to hear the Chinese words. [picture book, ages 2 and up]

Teach Kids Chinese Words in a Fun and Easy Way

Introducing Your Kids to Chinese and Spanish

How to Pronounce Pinyin (Cheat Sheet)

My mother-in-law would love my kids to learn Korean and so far, only PickyKidPix is interested. Korean is an alphabet language much like English. Here’s a video on how to pronounce the Korean alphabet.

With just one book, your kids will be exposed  to Korean culture and the Korean alphabet in a rhyming beautifully illustrated picture book. [picture book, ages 2 and up]

All About Korea: Stories, Songs, Crafts and More by Ann Martin Bowler, illustrated by Soosoonam Bary

If you wanted one book to cover Korea from songs, folk tales, food, and crafts, this would be it. It’s perfect for exploring the culture of Korea. You could mine this book for months if you wanted to do an in-depth unit on Korea, or treat it as a reference book and skip around. It’s the kind of book where you learn something new every time you flip through it. It won the 2012 Creative Child Magazine Preferred Choice Award! [non-fiction picture book, ages 4 and up]

Korean Nursery Rhymes: Wild Geese, Land of Goblins and Other Favorite Songs and Rhymes (with CD) by Danielle Wright, illustrated by Helen Acraman

Songs are a very effective way to expose kids to a language. The repetition needed to remember new foreign words is quite palatable through catchy tumes and nursery rhymes! These are the nursery rhymes and songs that Korean kids grow up with; their “Mother Goose” if you may. [picture book with CD, ages 1 and up]

Japanese is actually not so different from Spanish in terms of pronunciation. Like Spanish, it’s consonant-vowel-consonant-vowel. There is a basic “alphabet” called Hiragana of 47 letters that are used to make words and to show how characters are pronounced.

Then, there is Katakana which is another alphabet of about 50 letters used to spell out and pronounce foreign words.

Here’s a video on how to pronounce Hiragana.

With ABC rhymes, this picture book is perfect for introducing preschool aged kids to the Japanese language but because Kanji and Hiragana are included, it also works perfectly for older kids trying to learn Japanese. [picture book, ages 2 and up]

Want to learn to write Japanese Kanji characters? You can write in this book or just read the bi-lingual poems. It’s an illustrated picture book AND a workbook, all nicely hard-bound. [picture book, ages 5 and up]

My Awesome Japan Adventure: A Diary About the Best 4 Months Ever by Rebecca Otawa

There is a two page introduction to the Japanese writing system which includes two “alphabets” (Katakana and Hiragana) and characters called Kanji which are the same as Chinese characters. There are also some common greetings in Japanese written out in English. The format of book is a notebook graphic novel that mainly focuses on Japanese culture. This would be a really fun way to learn about Japan. [notebook style graphic novel for ages 6 and up]

I Know How to Hola by Suzanne Aspey, illustrated by Lucas Richards

This is the same book as I Know How to Ni-hao but in Spanish. We will use both to compare and contrast. [picture book, for ages 2 and up]

I found a great site by a native speaker to teach kids Spanish called Spanish Bookworld. The language videos are organized by topic and are free!

Introducing Your Kids to Chinese and Spanish

Huge Giveaway of Books to Expose Kids to a Foreign Language

Please indicate which language package you are interested in. Feel free to pick your first, second and third choice. 86 thoughts on “10 Books to Expose Kids to a Foreign Language: HUGE GIVEAWAY”