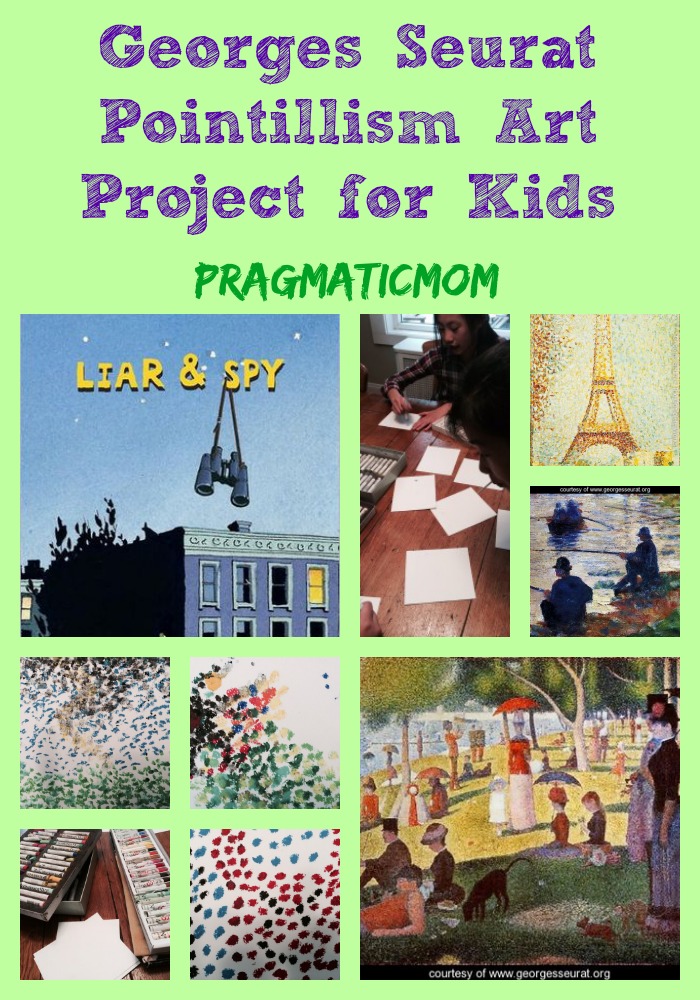 PickyKidPix and I love Liar and Spy by Rebecca Stead. She said it was a read aloud this past year for 6th grade English.

Since she was read to at school, I have a treat for you, my dear readers. I have Rebecca Stead reading from Liar and Spy! (If you haven’t read her excellent chapter book, this clip will set up the story).

Without spoiling the ending, I wanted to do an art project for kids that connects Georges Seurat with Liar and Spy. We didn’t use this (yet) for her 6th Grade Book Club, but it would work as an activity for a book club for kids.

I thought Georges Seurat was an interesting metaphor for the plot in Liar and Spy. The main character in the book, Georges, is a 7th grader who’s just moved to a Brooklyn apartment after his parents lost their house. Understandably, he’s not too happy about being the new kid at middle school.

He’s also not too happy about having an extra “s” in his name; the same spelling of his parents’ favorite artist, Georges Seurat. And there’s this whole idea of blurry lines: are you seeing the picture or the dots? Is what you see really what you think it is?

To fully appreciate the Georges Seurat connection, let’s take a moment to check him out.

Georges Seurat (December 2, 1859 – March 29, 1891) was a French painter and draftsman. His large work Sunday Afternoon on the Island of La Grande Jatte, his most famous painting, altered the direction of modern art by initiating Neo-impressionism, and is one of the icons of 19th century painting. From Georges Seurat Seurat’s famous painting, La Grande Jatte, also figures into Liar and Spy, and honestly, it is the only painting that I think of when I think of pointillism.

Here are a few more paintings by Seurat just to branch out. You can see why he is considered to be the father of impressionism! These two paintings are from our trip to the Museum of Fine Arts in Boston. The impressionist area is our favorite room. We can sit there for an entire 10 minutes even! (Yes, my kids have a short attention span!).

Georges Seurat influenced a whole movement of artists but he didn’t do it alone. Here’s his friend Paul Signac who is lesser known. And this painting by Claude Monet (sorry, I failed to capture the title), also has the same pointillism feel, don’t you think? We used oil pastels and chalk pastels on paper but you can use any kind of paint, markers, dot dot paint or even dot stickers. I recruited some middle school kids to help me with out with this. I have to admit that my middle school daughters are not easily convinced to create art for my blog so it’s entirely possible that money exchanged hands. What did you guess for PickyKidPix’s creation? Hint: she does not like any kind of natural disaster! Grasshopper and Sensei had a particular person in mind that she did not necessarily enjoy learning from. I’m not naming names. A playdate was recruited for her artistic abilities. Her’s is a Biblical reference. There are certain creatures that get into our house in the spring that my kids do not enjoy encountering. I am the only person who will rescue these critters that are good for gardens and, under no circumstances, should be squashed!

Can you figure out what each artist is scared of?

In Stead’s chapter book, the dots are the stories of kids living in the same apartment building. There’s 7th grader Georges who has just moved in and attending a new school. Safer is the first friend he makes, a twelve-year-old self-appointed spy who recruits Georges into investigating a mysterious neighbor.

Who is the Liar and who is the Spy? And when you stand back from the dots, what exactly do you see? Stead’s critics (perhaps only one annoying one) said that the story was subtle, perhaps too subtle. But is neo-impressionism too subtle? Not for the viewer who knows to look closely and then slowly back up and absorb the entire image.

Point by point. Dot by dot. Story by story. Liar and Spy does not disappoint. [chapter book, ages 9 and up]

This non fiction book details the life of Georges Seurat and introduces kids to his art. [non fiction series, ages 6 and up]