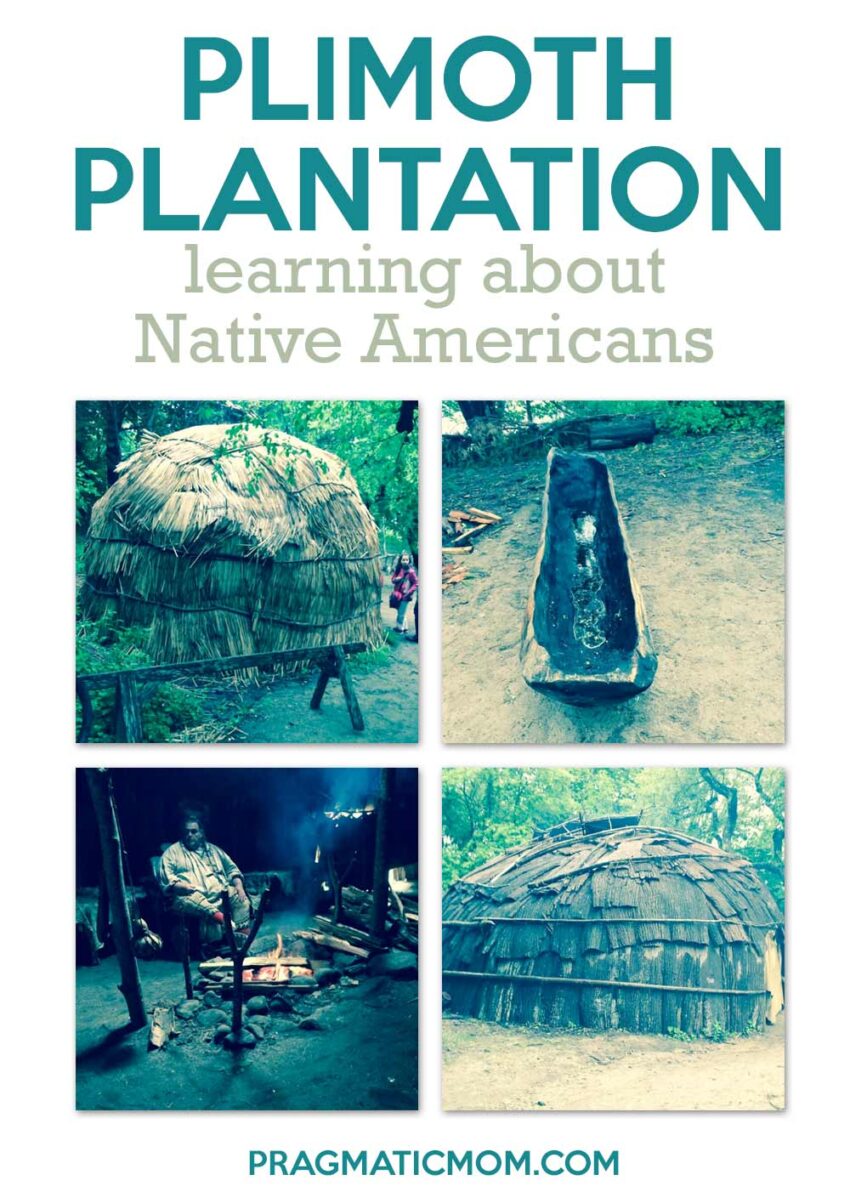 I went for the first time to Plimoth Plantation as a chaperone for my son’s third grade field trip. I somehow managed to avoid it for my girls. It was really a great trip and the kids were very well prepared. My son said that he preferred learning about the Native American (and Wampanoags specifically) over the Pilgrim story. The Three Sisters: Corn, Squash, and Beans. They are planted together and each helps the other to grow.

According to Iroquois legend, corn, beans, and squash are three inseparable sisters who only grow and thrive together. This tradition of interplanting corn, beans and squash in the same mounds, widespread among Native American farming societies, is a sophisticated, sustainable system that provided long-term soil fertility and a healthy diet to generations.

Corn provides a natural pole for bean vines to climb. Beans fix nitrogen on their roots, improving the overall fertility of the plot by providing nitrogen to the following years corn. Bean vines also help stabilize the corn plants, making them less vulnerable to blowing over in the wind. Shallow-rooted squash vines become a living mulch, shading emerging weeds and preventing soil moisture from evaporating, thereby improving the overall crops chances of survival in dry years. Spiny squash plants also help discourage predators from approaching the corn and beans. The large amount of crop residue from this planting combination can be incorporated back into the soil at the end of the season, to build up the organic matter and improve its structure. My son’s third grade class had been reading, as a read aloud, Ghost Hawk by Susan Cooper to learn about the Wampanoag in preparation for this field trip.

My son tells me that they started this chapter book about the Wampanoag Native Americans but will not have time to finish it before school ends. It corresponds nicely with their field trip to Plimoth Plantation (which I will be posting on shortly), and I LOVE Susan Cooper’s Dark is Rising series so I’m excited to finish this book at home this summer with my son. Mishoon: a Wampanoag canoe created from a log using fire to burn it out and then quahogs shells and bone to scrape into the hollow shape.

But then I had a Twitter conversation with Debbie Reese, the pre-eminent scholar on Native Americans in children’s literature, and she had issues with how the Wampanoags are portrayed in Ghost Hawk — her post is here. She gave me two alternate recommendations instead for teachers to use to teach about the Wampanoag during the 17th century.

The first is  Margaret Bruchac’s photo essay 1621: A New Look at Thanksgiving.

This would be a great choice for kids visiting Plimoth Plantation because her cousin was working at Plimoth Plantation when we visited and that would make for a rich discussion! Margaret’s brother, Joseph Bruchac, is also a well known, respected, and prolific children’s book author. My son’s class learned how wetus were constructed.

We were thrilled to meet Margaret and Joseph’s cousin in the winter wetu. He gently corrected me when I referred to it as a “longhouse.” No, it’s a wetu! We met Joseph and Margaret Bruchac’s cousin in the winter wetu at Plimoth Plantation.

Here’s a review to get a sense for the plot from Amazon:

“When Moss, a young Algonquian boy, accidentally broke his grandfather’s wampum in the morning that he was already dreading enough; his bad luck just got worse. When he showed the broken wampum to his grandfather, his grandfather said that he would just have to replace the old story with his own story and use the wampum’s beads to tell the story. He was to finish the story before the guests came that evening. When Moss refused to help with the preparations, he told his parents that he would run away before he ate with them. Moss left the village while he followed another Native American girl named Trouble. He followed her into the woods, even though she asked him not to. When Moss first told her that he was going on his away time, she did not believe him. Even though he was lying, she was persuaded when he adventured into the forest by himself. He found an animal in the forest that helped him dig deep into his heart and pull out the real Moss. When he found that he was lost, he became discouraged and walked in one direction. He came upon Trouble who showed him the way back. Moss is unhappy that the guests were coming and thought he might not return to the village. I recommend this book to children from ages 8-12 who enjoy exciting stories.”

It was wonderful to be able to talk to actual Native Americans. They represent their tribe but speak in English and are very knowledgeable about day-to-day life during the time of the Pilgrims. This is probably for the first time in his life that my son met Native Americans. It was their favorite part of the field trip! My son’s 3rd grade group project on the Wampanoags resulted in this presentation.

Part of the 3rd grade assignment at Plimoth Planation was a scavenger hunt that included asking Native Americans about the toys and games kids played back then. We learned about Let’s Play Ball from a member of the Wampanoag tribe from Martha’s Vineyard. (That always elicited an impressed “ahhh” which made him laugh!).

Let’s Play Ball is a game that stretches one mile along the beach. Men played it using a kind of ball. You had to dribble the ball by throwing it back and forth between your hands or carry it using your feet or legs. You could not just hold the ball and run. Other than that, there were no rules other than to get the ball to your end of the field! Sounds like football, crossed with rugby, crossed with soccer but much, much harder!

Here’s another game via a Plimoth Plantation video.

4th of July in Plymouth, Massachusetts