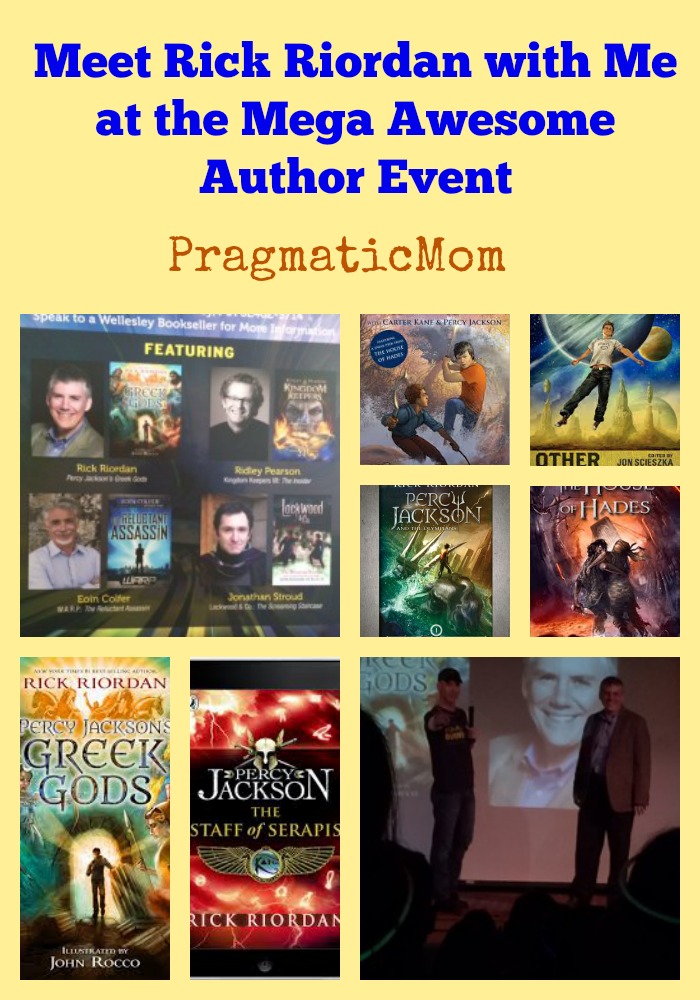 The main event! Rick Riordan at the Mega Awesome Author Event with Eoin Colfer, Jonathan Stroud and Ridley Pearson. It was an awesome group! Eoin Colfer should be a stand up comedian; that guy really is that funny! Jonathan Stroud has that lovely Brit sense of humor. He’s humble and charming. Ridley Pearson is the kind of author you’d want as a mentor. He’s kind, thoughtful and generous with his time and knowledge. But were we really here for Rick Riordan? Yes, yes we were. My son has read EVERY SINGLE WORD THAT MAN HAS EVER WRITTEN including the short story in Guys Read: Other Worlds and Son of Sobek in which we had to rent his sister’s Paperwhite at $1 per day! And he did not disappoint. The boys from my son’s book club were there and thrilled to be meeting Rick Riordan in the flesh. They clung to his every word and noted his two new books: Percy Jackson’s Greek Gods told from the point of view of Percy Jackson and another ebook where Sadie meets Annabeth called The Staff of Serapis. (Note to self to pre-order!)

And here he is to tell you all about his new books, advice to his younger self, what will happen to Annabeth and Percy, and a whole lot more!

The Staff of Serapis by Rick Riordan

Son of Sobek by Rick Riordan

The Demigod Diaries by Rick Riordan

The House of Hades by Rick Riordan

Percy Jackson and the Olympians Boxed Set by Rick Riordan 10 thoughts on “Meet Rick Riordan with Me”