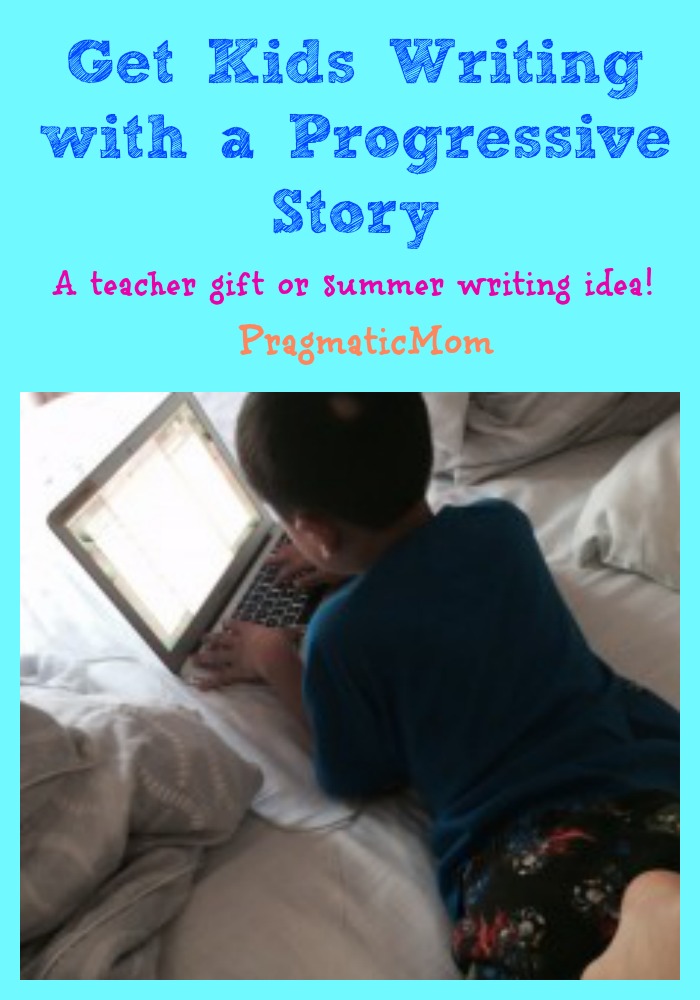 My son’s third grade class came up with the best idea for a teacher gift! A progressive story! Using Google Docs, each child wrote one or two paragraphs of a story about their teacher before passing it on. You needed to read the story before you could add your own, so it was also a nice way to get kids reading their peers’ writing! Genius!

The room mother who arranged this wonderful gift and I thought all the factoids the kids learned about their teacher all year were very funny. John Lennon has a prominent spot on the classroom door! I’m glad he figures into the progressive story! My son doesn’t write on his own. He might draw a little but his preferred way to entertain himself at home is parked in front of a screen either playing games or watching TV or videos on the computer.

At first, he had a slow start on his contribution to the story. A half hour of prompting and nagging yielded a single sentence: “Miss Donahue told us that we would be going to Disneyland in California and we will be getting a tour from Walt Disney. “

Apparently, he had written a paragraph, deemed it unworthy and deleted it. Oh the pressure of a progressive story! I insisted that he HAD TO FINISH NOW since we had the story for 3 days already and the other kids needed to write their paragraphs. Did I mention that there are only 7 days left of school?!

So he buckled down. The more he wrote, the more he got into it. He needed help with punctuation. “How do you do quotes Mom?” he asked.

And this is his final contribution:

Miss Donahue told us that we would be going to Disneyland in California and we will be getting a tour from Walt Disney. We took a private jet there. Our first stop was Space Mountain and everyone loved it.Everyone was laughing and screaming and having fun. “And everyone knows there are many rides at Disneyland,”Walt Disney said, “so…let’s go to another ride! All the kids cheered and gave suggestions: “Indiana Jones,” “Star Tours,” “Space Blasters,” kids shouted out.

“Let’s let Miss Donahue decide,” said Walt Disney. “Um…,” said Miss Donahue, “George* you decide.” “Indiana Jones!” George* said. “Then let’s get going,” Walt Disney said. “Oh, we only have time for one more ride,” said Miss Donahue. “I don’t want your parents to get worried.”  “That’s okay!” everyone shouted. “You’re the best class ever!” said Miss Donahue. So we went to the Indiana Jones ride. We got to cut the line because of Walt Disney. About 1/4 through the girls were already screaming and the boys were like “awesome!”Half way though the girls were screaming for their lives and the boys were like “this is the coolest ride ever!”And after the ride the girls were gasping for their breath and the boys were talking about how extremely awesome the ride was. After we said “thank you” to Walt and took a swarm of helicopters back wondering what we would do tomorrow.

I’m going to see if he will write a goofy, silly story back and forth with a friend this summer. I hope to get him writing more. It’s fun to read his creations and it would be nice to keep him off screens!

What about you? Can you get your kids to write for fun? Please share your ideas!

p.s. My next idea to try out … having my kids write postcards to anyone! 12 thoughts on “Get Kids Writing with a Progressive Story”