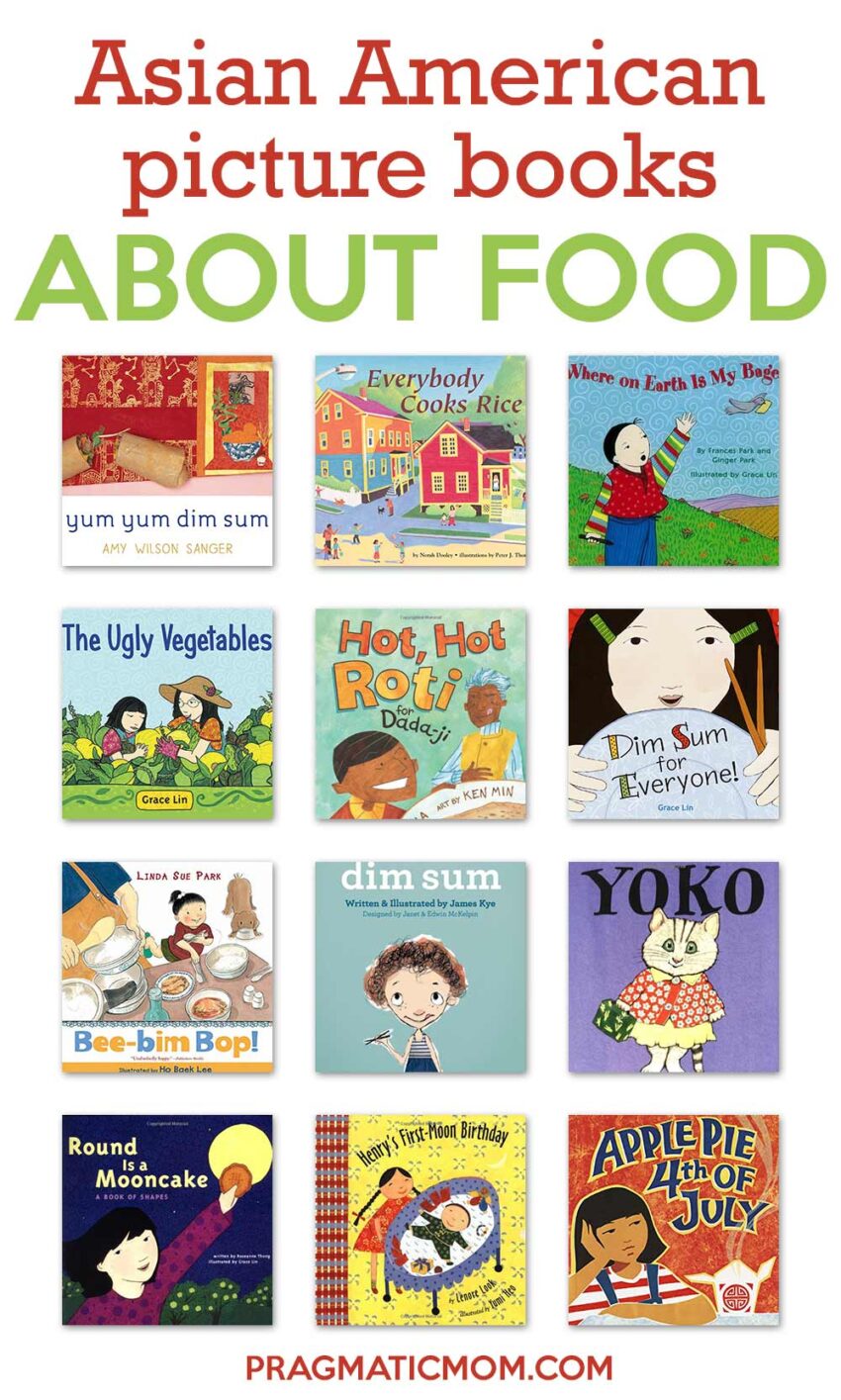 Being Asian means that you are all about food. Did you know that the greeting in Chinese, 你吃了吗？ {Ni (third tone) Chi (first tone) Le (first tone) Ma(third tone), means have you eaten yet?! The family style serving platters set the tone; meals are meant to be eaten together! It’s no surprise that there are quite a few Asian American children’s books centered around food. But you’ll notice that there are two themes to these books; proud to eat Asian food and embarrassed by it. I hope this list will help kids realize that their native foods should be celebrated! What are your favorite Asian American picture books centered around food?

No Time for Flashcards has a great post on 18 Picture Books about Food and I wanted to add to her Asian American book list with my favorites.

Yum Yum Dim Sum by Amy Wilson Sanger is a book that makes me crave dumplings something fierce but my daughter seems to like the rhymes and pink and red colors throughout. The book explains in a zippy text all about Dim Sum. It’s a board book targeted to babies.  It’s really useful to use to teach children about foods they may be unfamiliar with. There is even a little appendix with Chinese words for all the items mentioned in the book like tea, rice and tarts.

Everybody Cooks Rice by Norah Dooley is a fantastic book! The book follows a sister who is looking for her brother in their San Francisco neighborhood. As she goes from door to door each neighbor invites her in to eat some of their supper. Everybody is having some sort of rice dish even though they are all from different countries. My 6-year-old really enjoyed this book and understood the message well, my 3-year-old sat through it no problem too. There are so many future lessons in geography, nutrition, and travel packed in this one little book! Awesome find.

And here are our favorites!

Where On Earth is My Bagel? by Frances and Ginger Park, illustrated by Grace Lin

Sisters Frances and Ginger Park teamed up to tell this story of young Yum Yung who gets the notion of a bagel in his head and desperately wants to create one. He will need help from Farmer Ahn, Fisherman Kee, Beekeeper Lee, Baker Oh, a pigeon, and a bagel shop owner in New York City. [picture book, ages 4 and up]

If you want to attempt making a New York style bagel yourself, here’s a recipe from Sophisticated Gourmet.

The Ugly Vegetables by Grace Lin

Grace Lin lived for some time in Somerville, a suburb next to Cambridge in Massachusetts and I picture her neighbors of different ethnicities inspiring this book. It could just be my fantasy, but I’m going with that.

A young girl complains that her garden is ugly compared to their neighbors. Her mother assures her that their garden is special too even though there aren’t pretty flowers or recognizable plants. When harvest season comes, her mother makes a heavenly soup that sends the neighbors over hoping for a trade. The ugly Chinese vegetables turn out to make the most delicious soup. Grace Lin includes the recipe as well in the very back of the book! [picture book, ages 4 and up]

Grace Lin also posts the Ugly Vegetable soup recipe here. Besides the Chinese vegetables, you will need dried scallops which can be found at a Chinese supermarket or here.

There aren’t many picture books that celebrate the foods from India or Pakistan which can make kids feel like their food is “weird.” I love that Hot, Hot Roti for Daja-Ji celebrates both a multi-generational family and the delicious homemade food from their ancestral homeland. Daja-Ji’s tells his grandson that he is able to summon up superhuman strength because of the hot, hot roti he enjoys! [picture book, ages 4 and up]

Roti is a flatbread and easy to make. Why not try making some at home while reading this book with your kids?

Dim Sum for Everyone by Grace Lin

I found this recipe for Stir Fried Clams in Black Bean Sauce from Christine’s Recipes.

Bee-bim Bop is one of the Korean dishes that we notice that everyone enjoys. It’s meant to be a leftovers dish. Bee-bim Bop means “mix it up.” You take the leftovers from a traditional Korean meal of many small side dishes and mix it up with rice and perhaps a protein.

Linda Sue Park’s version is a jaunty rhyme where a mama and her daughter shop for the ingredients for Bee-bim Bop and then make it together. One thing I can guarantee; this book will make you hungry for Bee-bim Bop!

A lovely subtle touch by illustrator Ho Baek Lee is including the grandmother in a Hambok, a traditional Korean dress. [picture book, ages 3 and up]

This Bee-bim Bop  recipe from Food.com is meant to be a guide. If you don’t have all the ingredients, just make it with what you have. It will still be delicious! Leave the spicy sauce on the side for adults and replace it with soy sauce for kids who don’t like heat.

Jo Jo isn’t Asian but she’s an adventurous eater who will try interesting and delicious food! Can you challenge your kids to eat like Jo Jo? I also love the collage illustrations in this picture book by James Kye that combine cartoon drawings with photographs.

Will Jo Jo try the chicken feet? Would you? I personally love them! [picture book, ages 3 and up]

Yoko is one of my very favorite picture books for kids. It manages to cover so much territory from bullying, fitting in, ethnic foods to starting school. Yoko’s mother packs her a beautiful Bento lunch every day full of Yoko’s favorite sushi but when kids in her class make fun of her lunch — “raw fish?! seaweed?! — her teacher, Mrs. Jenkins, has to come up with a plan. The solution? International Food Day where each child brings in food from their homeland. Will someone — anyone — try Yoko’s sushi?! [picture book, ages 4 and up]

Yoko loves cucumber maki and here’s a recipe to make it.

Halmoni and the Picnic by Sook Nyul Choi

There’s a theme in certain Asian American picture books about the second generation trying to fit into two worlds; the traditional culture of their parents and grandparents from the old country and their American school life. It’s not an easy balancing act and when kids don’t see themselves or their families in the media, it’s easy to feel marginalized and/or ashamed if your family is “different.”

Yumni’s class is going on a field trip to Central Park in New York City and her grandmother, Halmoni (Korean for grandmother), is one of the chaperones. Yumni is worried that her friends will make fun of the food her grandmother brings and her traditional Korean dress. Will they?! [advanced picture book, ages 6 and up]

My kids love the Kimbap their Korean grandmother makes them! It’s different from Japanese sushi in that it’s like Bee-bim Bop rolled up. Delicious! Here’s a recipe!

Round is a Moon Cake by Roseanne Thong, illustrated by Grace Lin

This simple board book uses Asian motifs and objects such as mooncakes, abacus, inking stones, dim sum, lucky money to identify shapes. [board book, ages 2 and up]

Our Chinese bakery in Chinatown sells mooncakes for Chinese holidays but honestly, I don’t like them. The filling of sweet bean paste is too sweet and too dense. My adventurous eater, PickyKidPix, insisted on buying one to try, but she didn’t like it either.

It’s Jen’s little brother’s first-moon birthday and the entire family is scrambling to get ready. There’s so much to do from cooking a feast, cleaning to coloring eggs red. All of this to bring young Henry good luck. Jen’s a little jealous but by the end of the party, she realizes that she and Henry are a team like two matching socks! [picture book, ages 4 and up]

Jen drinks Jasmine tea with her grandmother. To try a cooking activity to go along with this book, try making Jasmine tea and dying eggs red.

Janet Wong’s parents actually owned a mini-mart in rural Oregon that sold Chinese food to go.  This book is an apology to her father who gets really busy on the 4th of July selling Chinese food; a surge in business that surprised Janet Wong! Even on this most American of holidays, people do eat Chinese food!

The young girl in the story feels a little left out that her parents are not celebrating July 4th in a more traditional way but she’s in for a surprise. [picture book, ages 3 and up]

This is another homage to Chinese restaurant owners based on a Chinese take-out restaurant in Brooklyn, Kum Kau. Their actual menu is preserved on the inside cover of the book.

Illustrated in realistic watercolor, it’s an inside peek on what goes on behind the scenes to run a restaurant. From ordering to prep to wok frying, Big Jimmy’s Kum Kau Chinese Take Out is hopping and the young narrator also has a job to do! [picture book, ages 6 and up]

There are very few Chinese families in the Midwest during the 1940’s so Jinyi and her family travel four hours by car to visit relatives in Chicago from Indiana. There, they get to eat Mama’s favorite Chinese foods … boiled soybeans, Eight Treasure Rice, pork-and-spinach dumplings. One day, Auntie Yang spots a field of leafy green plants. Could it be mao dou, soybeans?! It is! The farmer is growing soybeans as feed for cows and pigs but he’s happy to sell it to Jinyi’s family. They buy a huge bundle, boil them up, and set up tables to eat outside. Thus the family’s first soybean picnic was born. Over the years, word spread and the soybean picnic grew. Soon thirty Chinese families would drive up to Auntie’s house. Eventually, more than two hundred people gathered until it outgrew Auntie and Uncle Yang’s backyard!

This is a true story! The authors really do have an Auntie Yang who discovered a soybean field near her house. Her soybean picnic grew into a huge annual event, connecting other Chinese immigrant families during WWII. [picture book, ages 5 and up]

For these last two picture books, go to a Chinese restaurant or order Chinese take out!