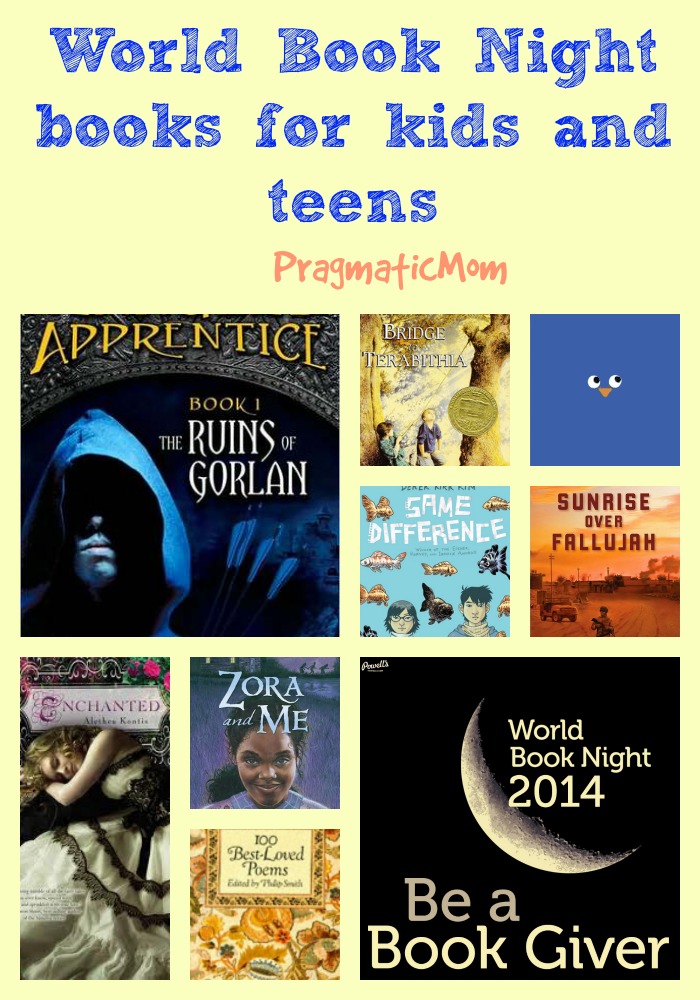 Today is World Book Night and the purpose is to spread the love of reading from person to person. World Book Night has assembled a book list for 2014 and I’ve hightlighted the books for kids and teens. I hope you get a chance to spread the love of reading tonight by reading together or gifting a book!

Zora and Me by Victoria Bond & T.R. Simon

Racial duplicity threatens an idyllic African American community in the turn-of-the-century South in a dazzling debut inspired by the early life of Zora Neale Hurston. [chapter book, ages 10 and up]

The Perks of Being a Wallflower by Stephen Chbosky

The Perks of Being a Wallflower is a story about what it’s like to travel that strange course through the uncharted territory of high school. The world of first dates, family dramas, and new friends. Of sex, drugs, and The Rocky Horror Picture Show. Of those wild and poignant roller-coaster days known as growing up. [young adult, ages 14 and up]

The Ruins of Gorlan: The Ranger’s Apprentice, Book 1 by John Flanagan

They have always scared him in the past—the Rangers, with their dark cloaksand shadowy ways. The villagers believe the Rangers practice magic that makes them invisible to ordinary people. And now 15-year-old Will, always small for his age, has been chosen as a Ranger’s apprentice. What he doesn’t yet realize is that the Rangers are the protectors of the kingdom. Highly trained in the skills of battle and surveillance, they fight the battles before the battles reach the people. And as Will is about to learn, there is a large battle brewing. The exiled Morgarath, Lord of the Mountains of Rain and Night, is gathering his forces for an attack on the kingdom. This time, he will not be denied. . . . [chapter book, ages 10 and up]

Hotel on the Corner of Bitter and Sweet by Jamie Ford

In the opening pages of Jamie Ford’s stunning debut novel, Hotel on the Corner of Bitter and Sweet, Henry Lee comes upon a crowd gathered outside the Panama Hotel, once the gateway to Seattle’s Japantown. It has been boarded up for decades, but now the new owner has made an incredible discovery: the belongings of Japanese families, left when they were rounded up and sent to internment camps during World War II. As Henry looks on, the owner opens a Japanese parasol.

This simple act takes old Henry Lee back to the 1940s, at the height of the war, when young Henry’s world is a jumble of confusion and excitement, and to his father, who is obsessed with the war in China and having Henry grow up American. While “scholarshipping” at the exclusive Rainier Elementary, where the white kids ignore him, Henry meets Keiko Okabe, a young Japanese American student. Amid the chaos of blackouts, curfews, and FBI raids, Henry and Keiko forge a bond of friendship–and innocent love–that transcends the long-standing prejudices of their Old World ancestors. And after Keiko and her family are swept up in the evacuations to the internment camps, she and Henry are left only with the hope that the war will end, and that their promise to each other will be kept.

Forty years later, Henry Lee is certain that the parasol belonged to Keiko. In the hotel’s dark dusty basement he begins looking for signs of the Okabe family’s belongings and for a long-lost object whose value he cannot begin to measure. Now a widower, Henry is still trying to find his voice–words that might explain the actions of his nationalistic father; words that might bridge the gap between him and his modern, Chinese American son; words that might help him confront the choices he made many years ago.

Set during one of the most conflicted and volatile times in American history, Hotel on the Corner of Bitter and Sweet is an extraordinary story of commitment and enduring hope. In Henry and Keiko, Jamie Ford has created an unforgettable duo whose story teaches us of the power of forgiveness and the human heart. [young adult, ages 14 and up]

Roy Eberhardt moves a lot with his family because of his father’s job and is now somewhat unhappily in Florida where the big school bully has singled him out.  He can handle it; from moving so much he’s used to this kind of unpleasant attention.  But something else catches his eye, an unusual boy nicknamed Mullet Hands that he catches glimpses of.  Who is this boy and how is he involved in the new Mother Paula’s All American Pancake House development?  And why is there a picture of an owl on the cover of the book?

Seven years later, it’s clear that Same Difference has won a place among the great literature of the last decade. It stands not only with Fun Home, Persepolis, and American Born Chinese as a lasting graphic novel, but with much of the best fiction of this young century. [graphic novel, ages 14 and up]

Robin “Birdy” Perry, a new army recruit from Harlem, isn’t quite sure why he joined the army, but he’s sure where he’s headed: Iraq. Birdy and the others in the Civilian Affairs Battalion are supposed to help secure and stabilize the country and successfully interact with the Iraqi people. Officially, the code name for their maneuvers is Operation Iraqi Freedom. But the young men and women in the CA unit have a simpler name for it:

Bridge to Terabithia by Katherine Paterson

This Newbery Medal-winning novel by bestselling author Katherine Paterson is a modern classic of friendship and loss.

Jess Aarons has been practicing all summer so he can be the fastest runner in the fifth grade. And he almost is, until the new girl in school, Leslie Burke, outpaces him. The two become fast friends and spend most days in the woods behind Leslie’s house, where they invent an enchanted land called Terabithia. One morning, Leslie goes to Terabithia without Jess and a tragedy occurs. It will take the love of his family and the strength that Leslie has given him for Jess to be able to deal with his grief.

Popular, well-known poetry: “The Passionate Shepherd to His Love,” “Shall I compare thee to a summer’s day?” “Death, be not proud,” “The Raven,” “The Road Not Taken,” plus works by Blake, Wordsworth, Byron, Coleridge, Shelley, Emerson, Browning, Keats, Kipling, Sandburg, Pound, Auden, Thomas, and many others. Includes 13 selections from the Common Core State Standards Initiative: “Stopping by the Woods on a Snowy Evening,” “Fog,” “Chicago,” “Jabberwocky,” “O Captain! My Captain!” “The Road Not Taken,” “Musee des Beaux Arts,” “Ozymandias,” “Sonnet 73,” “The Raven,” “Because I Could Not Stop for Death,” “Ode on a Grecian Urn,” and “The River Merchant’s Wife: A Letter.” 14 thoughts on “World Book Night Books for Kids and Teens”